Youtube
Статьи  >  Visit  >  Ground-hog day in Switzerland: we are in response for those whom we have fed

Ground-hog day in Switzerland: we are in response for those whom we have fed 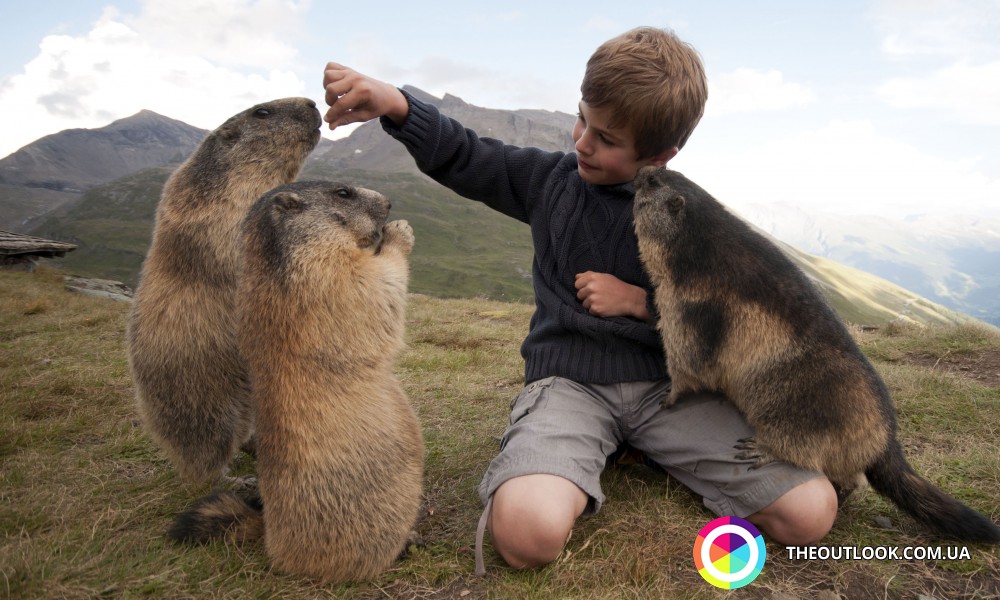 The hospitality of Switzerland does not know borders. Not only administrators of hotels soaped down with generous tips but also wild animals try to serve the tourists. Maybe, only in Swiss Alps one can meet groundhogs who jump on the knees to the travelers. A smart animal any minute how could speak human voice as clinging beady eyes shine with the intelligence and slyness…

Looking at the full-fed Alpine groundhogs who gut bags and pockets of the travelers, one start understanding that the existence defines mind not only in the human society but also in the kingdom of fauna. Twenty years ago in the rocky taverns of canton Graubünden the guests were feasted with groundhog meat while strong cutting teeth of beat dead animals were sold as the souvenirs. Being afraid of the explosions of plague, Swiss authorities in 1869 forbade non-sanctioned cull of groundhogs, and since then animals started living in grand style. It is astonishing that in French-speaking regions these rodents are highly likely to call on a French manner – murmeles, but not marmots as in France.

A year and a half of bellyful and calmness numbed instinctive fear of the animal before human. Only hearing the steps, murmeles come from the holes to ask for delicacy such as hashed carrot, ground-nut, cabbage, and crackers. The country people make money on the love to animals trading with the presents for murmeles in wayside restaurants.

The biggest colonies of wild groundhogs are situated on the way from the passage Furka to the passage Grimsel on the border between cantons Bern and Wallis. Among the hills one could comfortably hide from eagles and hawks while high-altitude meadows have a great deal of nutriment such as worms, maggots, and roots. The start civilization cannot frighten murmeles as they flexibly turn the achievements of the progress to their benefit moving from high mountain region to the new settlements along the platforms of cable railway Grindelwald-Manlichen and under the station Spielboden. The sensible animals understood that birds of prey are afraid of funicular while ground near the platforms is much milder and amenable than in rock mass.

The best time for the meeting with murmeles is from May to September. Early in the spring animals are busy with marriage games and in the autumn they prepare for anabiosis. By the way, Apline groundhogs refuse to celebrate the second of February along with American relatives continuing to sleep by the end of March.

Family with children can socialize with groundhogs in more civilized places passing guileful rocky ways. The most pleasant murmeles inhabit within the territory of mountain skiing resort Saas Fee surrounded with the rocks of snowy four-thousand hills. In the borders of resort area automobile traffic is limited; however, one may get to the settlement by bus that arrives from the station Fisp every half an hour. The feeding of groundhogs is included in many programs of popular travel routes giving big incomes; that is why people fuss over these animals. The yager looks attentively at the tourists’ behavior and attempts to betray trust of animals could lead to a significant fine. An incredible friendship of murmeles is paid by the labor of several generations. For instance, approximately half a century ago the citizens of surrounding villages started feeding groundhogs leaving food near the holes.

The meal of groundhogs represent a ravishing spectacle. Downy gourmand holds the delicacy with the fore feet and slowly beats one piece after another expanding the pleasure. A good appetite is inspiring. Luckily, in Saas Fee one may dull the edge of his appetite not distorting attention from the savoring of charming landscapes. The underground funicular will drastically get to the most high-mountain restaurant in the world freezing on the edge of ice cellar.

One more popular place is the picturesque Alpine garden La Rombertia called in honor of French poet and naturalist Eugene Rambert. In the reservation ’Groundhogs paradise’ at the sunny slopes of mountain Rochers-de-Naye there are fourteen kinds of rodents. A wide exposition of the local zoological museum is dedicated to them. The entrance ticket costs only 25 euro including the attendance of the Center of investigation of groundhogs and feeding of animals in the natural habitat.

The guides in an interesting way explain the habits of murmeles. Consequently, you will easily get on well with these animals who are used to taking feeding from the arms. The ride works till the beginning of hibernation, however, the workers of the park do not leave their pets with hawks. Sleepy murmeles are, in their turn, moved to the specially equipped houses with day and night video surveillance. It is convenient to get to the park on the one-track line from Montreux while more enduring tourists may start the ascent from Jaman passage at the station Kou enjoying the magnificent views on the Alpes de Savoie, Chillon castle, and eastern coasts of Lac Leman surrounded with famous vineyards Lavaux inherited from the Benedictine monks.

Savoie agricultural people have a special attitude towards murmeles. In lean years the smart animals saved from the starvation death hundreds of orphans and children of poor people who earned money with street tricks in the neighboring countries. In XVIII century Germany was overwhelmed with the fashion on Savoyards, particularly, wandering performers with trained groundhogs. The soul-gripping image of resilient boy in colorful rags who hugs the knapsack with shaggy friend was embedded for the future generations at the famous picture of Jean Antoine Watto.

The adeptness of little circus actors impressed Goethe deeply: attending the performance in 1749, the poet corrected the play ‘Trade-fair in Ploundersvailler’ and added to the leading characters a new hero for whom the ballad ‘My groundhog is with me’ was written. In forty years the song of Savoyard was put into music by Beethoven, and since then every person who graduates from musical school is to guess the classic melody from the first notes. In addition, nowadays there are people who love domesticating murmeles as groundhogs quickly get used to the good manners and attach to the owners.