Youtube
Статьи  >  Imagine  >  Rodeo. On the ring with death

Rodeo. On the ring with death 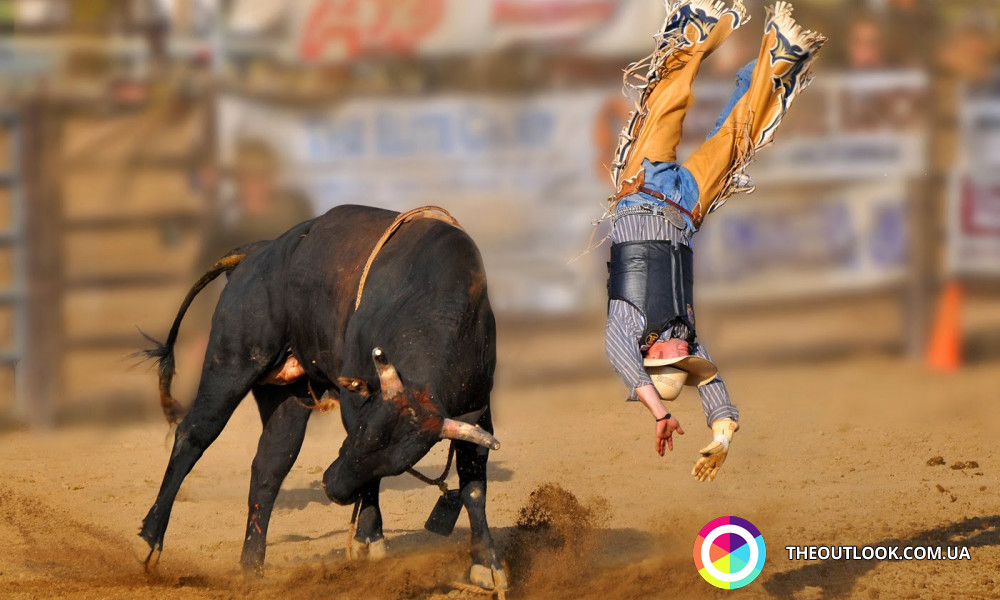 Perhaps, this is the most traumatic, but at the same time, spectacular sport. Rodeo is popular in Argentina, Brazil, Chile, Mexico, the United States, Canada, and even in Australia. It's hard to say who is the main bull in this brutal game, either it is verily the bull or his rider. For spectators this is a bright show while for the participants frequent heavy injuries forever change the life of the dashing cowboys and their opponents in the ring.

Rodeo poetically sung not in a single work of Hollywood cinema. They are always films about passion, money, fame and defeats. Such movies fascinate and does not leave indifferent. However, this sport is a bit different from the scenario. These are years of hard training, it is a constant meeting with a real danger and often a disability.

The main condition of the rodeo is that the rider must stay on the bull for eight seconds. Only then he gets his glasses. At the same time, judges evaluate the activity of the bull itself - its obstinacy, steep temper and, of course, the desire to throw off the back of a person. In doing so, use any adaptations to the rider, such as metal spurs on boots or electric shocks are prohibited. The person remains alone with the animal. Vigorously in the ring there are the bulls of a certain breed. They are specially grown for such spectacles. Initially, they undergo training with a dummy on their backs and only after a long training they are released into the ring. Bulls are taught to leave the field immediately after the rider has fallen from their backs. However, it happens that the bulls forget to do it and then the rodeo ends badly. More often it happens for a person. Animals in rage are able to attack the rider, throw him off, and give serious fractures and mutilations. In this case, all cowboy earnings go to treatment. Clowns work to reduce the risk of rodeo. At the moment when the animal sets free the rider, a man dressed in bright clothes runs out onto the field and, if possible, distracts the bull. These are always risky people. After all, anticipation of the reaction of an angry animal is not easy. Therefore, clowns with rodeo should have a quick reaction and be able at the right time to jump into the barrel, serving as their refuge during a direct attack by the bull.

In total, in the United States, where this gambling is originated from, more than five thousand professional rodeo jockeys are registered. Annually in the country there are competitions. The best people are chosen in December. Winners receive monetary rewards from voluntary donations and sweepstakes. The maximum earnings of the finalists are about one hundred thousand dollars. In addition, rodeo participants also receive material prizes, such as leather belts with buckles, trucks or cars.

The rodeo is also attended by horses and from recently even sheep. True, the latter take part in the so-called "children's" rodeo when the riders of animals are very young. Depending on the country, the conditions of this match may be different. For example, in Chile, during a match, two players on horses must stop the bull without any attachments and press it with the hulls of the horses. However, the main components of the classical rodeo remain: to catch the bull on the lasso, to travel around the horse with the saddle and without, to go round the barrels on the horse for speed, to jump on the calf from the horse's saddle, to hold out for a certain time on the bull, command lasso. The age when the cowboy career comes to end is about 35 years. Seldom does anyone manage to last longer. The reason is injury, because jeans and leather vests poorly protect jockeys from injuries. The death rate among athletes is also quite high. Every year in the battle with animals in the ring, more than ten people die. Long time ago, the athletes used to be obliged to wear helmets during such performances, however, they refused to defend, arguing that it was so, they did not feel the spirit of the rodeo.

The advocates of animal rights and insurance companies are constantly against this sport. It's hard to say who will stand in this confrontation and whether, as they promise, androids will appear on the rodeo