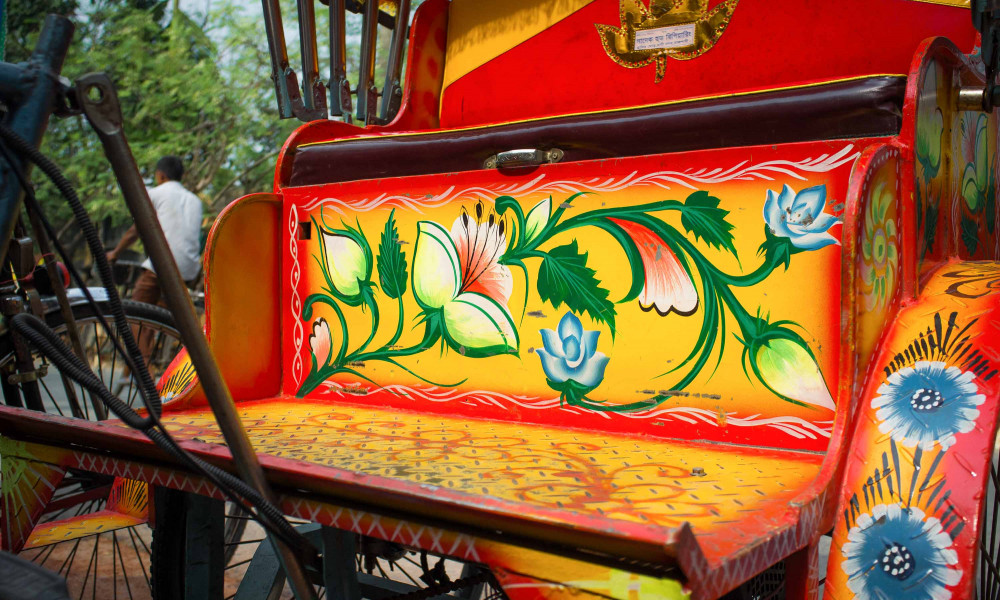 For 70 years the capital of Bangladesh is impossible to imagine without colourful pedicabs (bike taxis), successfully replacing taxi for Dhaka residents. Every inch of such cart is covered with drawings, the same as body of a rock musician is covered with tattoos, and drivers behave so confident as if the whole city belongs to them.

And there is some truth in it: daily Dhaka is short of breath due to traffic of motor age, and solution of transport problems rests with legs of tireless drivers.

Pedicab is not just a means of transportation, but the symbol and pride of Bangladesh. Army of artistically decorated carts with more than 350 000 soldiers from morning till night scurries around the city, flying like a mosquito into the most inaccessible spots. Hordes of rickshaw guys patiently pedalling search for treasured passengers in the territory of the area they serve. It is impossible to cover the entire city as Dhaka is growing in crazy pace and just in 50 years turned into multimillion-resident anthill with boundless territory. Admiring a smart look of Bangladeshi leg-powered taxi decorated with images of movie heroes and anthropomorphic animals, one wonders where is that pipeline churning out thousands of them each with a unique design? The answer was found in small workshops in the historic old quarter of the Bangladeshi capital.

It emerged that creation of a cart is thin and laborious process distributed usually between six performers. People are involved in both technical work (welding and assembling, often from recyclable materials) and design. Bicycle front frame is joined with painted chassis which looks like basis of garden cart. Then a wooden seat is attached to it, then lounge with a retractable roof is mounted, parts of it are stitched with the sewing machine.

Several people are responsible for rickshaw design. Artist's hand touches a special plate attached at space where usual cars have number plates. Instead, rickshaws have pasted pictures which serve to identify driver as pictures are rarely repeated. On the canvases one can see cinema characters, bizarre scenes with animals (for instance, deer, lion and tiger having breakfast at the same table), the architectural beauties of the country. Also with the help of complex applications, walls and roof got painted, as a result a wagon turns into a nomadic caravan.

Young and old work on production of rickshaws. The output is an iron horse valued at 300 USD, that is a very decent amount for Bangladesh citizens. It is well-illustrated by the story of one pedicab business man. 61-year-old Dzhoynal Abedin, earning at best six dollars a day, saved half of his income for 30 years and managed to accumulate 30 000 USD. Venerable rickshaw spent money to build a hospital in his native village. He did it in memory of his father who died because the nearest clinic was located at a great distance from home. Learning about such noble deed from the national newspapers, other Bangladeshis sent donations to hospital. And the master of the medical establishment continues to pedal in Dhaka. Bangladesh: Frozen-in-Time Metamorphose
Crazy stream of traffic with double-decked busses – second of which is a roof full of dare-devils, cycle rickshaws scurrying far and wide like dragonflies, contrast of centuries-old temples and colorful advertising signboards, high-rise blocks with their curious dwellers, ready to invite a stranger to their wedding in the heat of a friendly talk right after first meeting – that’s what Bangladesh is about.