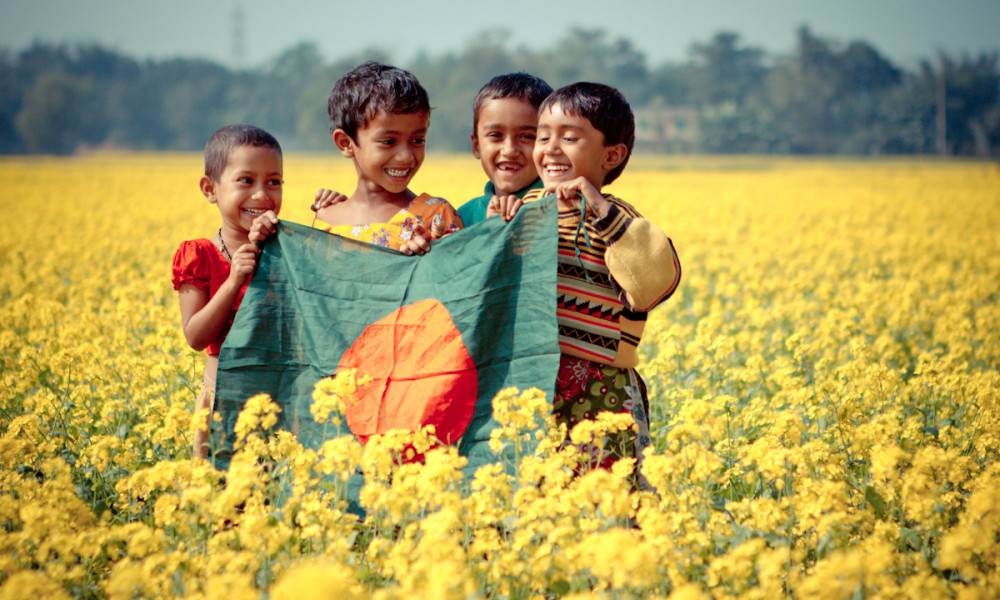 Crazy stream of traffic with double-decked busses – second of which is a roof full of dare-devils, cycle rickshaws scurrying far and wide like dragonflies, contrast of centuries-old temples and colorful advertising signboards, high-rise blocks with their curious dwellers, ready to invite a stranger to their wedding in the heat of a friendly talk right after first meeting – that’s what Bangladesh is about.

It is amazing how majestic temples created with hands of ancient Bengali get along with everyday rush of Bangladeshi reality. As if oases of olden times silently watch life in full speed with all the fickleness of its many faces. Bangladesh is one of the most densely populated stated in south-eastern Asia that eased into the delta of the Ganges River in the foot of imperial gates of the Himalayas. In what used to be mighty kingdom of Bengal, all-consuming anarchy of “traffic cacophony” reigns today and its many facets can hardly be compared to any other Asian country. This chaotic mass of traffic is made with busses, choke-full of aborigines, omnipresent cycle rickshaws with smiling drivers, disobeying every road traffic regulation and ready to offer a sightseeing tour in their “carriage”, trains with nothing else but “extreme” being their second name, and even boats used by locals to get to work by water and come home in the evening. Despite uneasy way of life connected to financial instability and comfort-restricted conditions, majority of Bangladeshis are open and ready-to-engage people who show unconcealed interest in foreigners.

Though “the country of Bengalis” is considered indigent, one can endlessly admire richness of its nature. Sundarbans Forrest, reveling in verdure, is famous for diversity of its vegetation. Evergreen mangrove trees, the ones that have burgeoned to form a huge colony and cover entire coast, are considered favorite among Bengali groves. Tourists from various nooks of the planet go there to look at tropical heaven. Attention of travelers is attracted by another dweller of local forests, this time representative of fauna. Beneath crowns of flossy trees rare Bengali tigers walk stately and deliberately, mango thicket became for them a shelter from poachers who threaten wild cats with complete extinction.

Tourism of Bangladesh, that strengthens its positions in global industry of leisure more and more each day, has already managed to become a reliable source of the country’s income. Currently this small state can boast of having several resorts for European tourist, one of them is Cox’s Bazar. Located on borderland with Myanmar, it amazes with its endless golden beaches, gently washed with waters of the Bay of Bengal, and active waves that lure surfing-lovers. Prior to sinking with both thoughts and body into sun-caressed white sand, representatives of the fair sex should make sure that their swimming suits don’t embarrass local citizens who live in compliance with religious morals. You may want to save your open bikini for more isolated beaches, Himachery, for instance.

Steeple-roofed white pagodas standing out on small hills, Buddhist temples, shrines of Bara Khyang monastery and the largest bronze Buddha statue in the country – there are ways to diversify own leisure for relics “hunters”. Those who come to Bangladesh for exotics can set on a hiking to jungle under supervision of an experienced guide – there, alongside unpredictable wild nature, numerous abandoned palaces of Indian Mahārāja Princes await them. Beach or conquest of wild tropics – whatever you may choose, most important is to bear in mind that in this small country summer greets tourists with unwelcoming rain season while spring is the best time to visit Bangladesh.

Should wild nature conditions, that lack convenience altogether, be not your cup of tea, you can always “set camp” in one of privileged world-class hotels. Radisson chain, just as Best Western, covers this small state to offer European standards of convenience and services. Bars and disco clubs are an exclusive rarity for the streets of Bangladesh, including the capital, therefore such entertainment is considered domain of hotels. However when it comes to shopping, it would be hard for any other South Asian state to compete with the country that such brands as Levis, Nike and Adidas have transferred their production to. Globally recognized clothes can be found in majority of trade centers of the capital, at that they cost significantly less than in malls of Europe. Diversity of souvenirs is even more impressive: alongside new Nikes one can take home multi-colored hand-made fabrics, delicate silk, dolls created in national motives, all kinds of decorations made of reed, bamboo and coconuts and pink pearls. Small trade village Dhamrai is a true haven for ladies who like to sophisticatedly “dress” own ears and hands. In each of numerous local ateliers a craftsman would execute earrings or a bracelet of any degree of complexity using noble metals for the work; and after that articles would be delivered directly to future owner’s hotel. Wherever you go on shopping – whether it be market or one of numerous shops – everywhere it is appropriate to bargain especially if an item you are interested in lacks price tag, this will help reduce price of an aspired purchase by several times.

Bangladesh is a country of palaces, temples and mosques and there are about seven hundred of the latter ones. Each of these buildings is a true work of art created plentitude of centuries ago and not spoiled even by inexorable time. One of recognized architecture masterpieces is Buddha Dhatu Jadi or the Golden Temple. Thank to its advantageous location on the top of a high hill the temple, that combines classic features of a Buddhist sanctuary and modern architectural details, can be seen from every spot of Bandarban City. Attention of not just Buddhist monks but also tens of thousands of travelers is attracted there by a huge statue of Buddha its size exceeding the one of any other sculpture of the great sage in the country. Nearby the statue of the Enlightened there is a water basin called the Pond of Angels – religious celebrations are held every day on its banks.

Every year cultural and architectural heritage of Bangladesh gets larger to impress with new masterpieces. Not very long time ago in a suburb of Dhaka a copy of fundamental Taj Mahal emerged. Twin of Indian mausoleum impresses with being full-scale, accurately repeating all the parameters, even patterns – and it was built much faster than its predecessor. Bangladeshi palace was erected using financial resources of local TV producer Ahsanullah Moni who aspired bringing of beauty of the famous mosque to the vast of native land for his fellow countrymen, who do not always have money to see the world, to be able to admire the great erection. Construction of the second Taj Mahal took about five years while its original was erected over more than twenty years. Modern technologies also limited “manual” work to significantly reduce number of hired workers compared to twenty thousand builders engaged in erection of the Indian palace in its due time. Though entire process of birth of the construction took significantly less human resources, both decoration and settings of the building – starting with ornamentation and ending with landscaping – cost Moni quite a lot; Italian granite and marble were exclusively used in refinement and diamonds were brought from Belgium. All in all the public figure spent almost sixty million dollars on the process and he hopes that the colossal construction will attract foreign tourists to the country and they will be able to appreciate how much newly-erected Bangladeshi copy communicates the spirit of the initial mausoleum that peacefully naps on the bank of Yamuna River.

Rickshaw: More than just a bike taxi
For 70 years the capital of Bangladesh is impossible to imagine without colourful pedicabs (bike taxis), successfully replacing taxi for Dhaka residents. Every inch of such cart is covered with drawings, the same as body of a rock musician is covered with tattoos, and drivers behave so confident as if the whole city belongs to them.