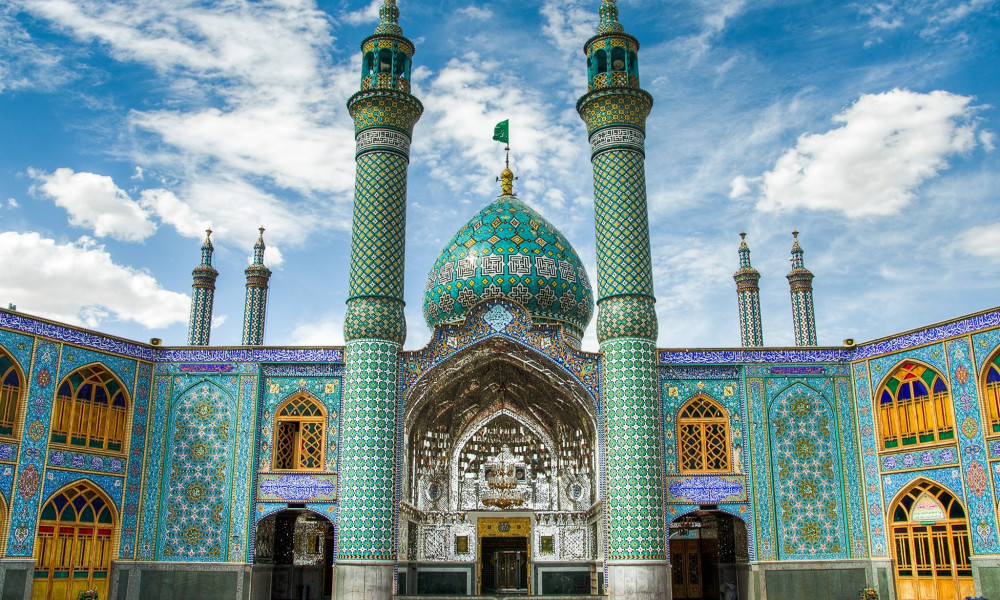 Yelena Rasenko visited an amazing country – Iran – and shares her impressions with Outlook readers. Today we publish first piece out of a series of features about this exciting trip! Only at the third try we, three brave women who decided to go to Iran on vacation, managed to have our invitations received. Ironically, Ministry of Interior of Republic of Iran...

Only at the third try we, three brave women who decided to go to Iran on vacation, managed to have our invitations received. Ironically, Ministry of Interior of Republic of Iran, when they had received them from one of Tehran tourist companies, somehow faxed them to their country’s diplomatic mission in India, then in Spain. We got the feeling that we were being tired out for us to have time and change our mind as to going on such an unusual trip. We remained persistent and were rewarded. Ultimately, Embassy of Iran got our invitations and we embarked on a journey.

There was almost nobody on the plane. Several Armenians, students flying home for visit and a joyful delegation of Ukrainian dentists. Snow-covered mountains were floating beneath our feet, between them, down there, rivers were winding snakelike, heavy clouds were drifting by.

At the airport there was almost no survey. Only a strict woman, all dressed in black, inquired who we were visiting to write down the address of our future accommodation and also advised us to carefully hide our hair beneath kerchiefs.
Photo msn.com

An old friend of ours, Farzad, picked us up. He used to study in Kiev and spoke Russian well. We were heading along a dark road way down South. The car was moving evenly, the road was comfortable and broad, with bright lamps lighting it all along. We were rushing through desert regions, remote villages, but high-quality road never ended. Iranian autobahns are almost as good as Polish or Czech ones. As to cars themselves, should you zone out for a moment, you can feel yourself in France. Why? Because enterprises, that gather local cars based on the patent from Peugeot, operate in Tehran’s vicinity. By the way, such a car is much cheaper than the original and costs some 12 – 15 thousand dollars. French original’s price is significantly higher. But Iranian roads are far more often driven by huge trucks with paving stone in their vessels as well as fruit, carpets, sheep, buckets and construction workers.

We began our acquaintance with the country in Isfahan – beautiful ancient eastern city that resembles a set design for one of Scheherazade’s tales. Turquoise, silk and lurex were flashing before our eyes, odors of spicery and herbs flooded our nostrils, our hands were now and again reaching for famous Persian carpets, copper dishes and caskets made of camel bones. Vendors were offering coconuts and pomegranates. There were so many of the latter ones at the market that their smell, of both fresh and rotten ones, was stalking us everywhere, as if besotting us with sweetness of eastern market atmosphere.
Photo yahoo.com

We were stared at as much as, say, dancers who decided to perform a cancan during a governmental reception, lilac apples on a tree, if such existed, or re-discovered treasures of Persian King Cyrus. It should be mentioned that foreigners are a rarity in the provinces of Iran. Almost every person who knew several phrases in English held it own duty to ask us: “Where are you from?” Iranian girls turned out to be the most communicative. They were gathering around us in coveys, hugging and kissing us on our cheeks. Truth be told, for want of habit such attention seemed unnatural but openness and joy with which Iranian women were fluttering around was very prepossessing and lulling.

By the way, ladies in Iran are true fashionistas. Despite pretty strict rules of an Islamic state, each strives to distinct herself somehow. Majority of townswomen wear trousers and cloaks above or slightly below knee level. And a kerchief, of course. More often than not it is dislocated towards head’s back and hardly covers large sophisticated hairstyle assembled of a shock of black hair. Some of them whiten fringes and apply huge make up layer, spicing it all up with a vey thick and sweet odor of French perfume.

Kerchief frequently flies off of heads because it isn’t that easy to hold to charming constantly laughing heads. Therefore in Iran such kind of headwear as maghnae enjoys great popularity. It is a piece of fabric sewed in a shape of a tube with a fixed peak. Maghnae sits firmly on a head. Women with stronger religious views put on chador – black fabric that hides body shape from head to toe. At that they hold one edge of chador with their teeth so that woman’s eyes alone are visible. There are about 40% of such women in Tehran and Isfahan, in the provinces there are up to 100%. However modern rules do not exclude beautiful clothes with low cleavages and short skirts. Still, women can wear that exclusively for domestic purposes.

Iranian men like to be nicely and tastefully dressed, too. We noticed that majority of sterner sex representatives in cities were wearing tight jeans, bright T-shirts and were abundantly showered with perfumes, much like women. Men are strictly forbidden from wearing shorts there.
Photo Naqsh-e Jahan Square irantravelingcenter.com

Iranians love their relatives and are sure to show pictures of them in their phones when they meet; when telling about their kids they are bound to boast of their success at school or artistic talents. Children are sacred for Iranians. As well as calling mom, dad, brother, aunt, close and distant relatives. As a rule, every Iranian has several hundreds of former ones and about a thousand distant ones. To their credit, not only they know many of them by names, but can also tell where they work and who they married.

Effectively, patriarchy reigns in the country and women are fine with it. Because, in compliance with the law, husband is to fully financially support them and in case of divorce pay significant amounts to help his ex-whife. Upon divorce, children remain with fathers or his relatives, too. During our trip we heard men complaining more than once that the only things their women are interested in are new collections of clothes by famous European designer or Italian chandeliers but they would immediately add that they were ready to work night and day only to bring joy to their other halves with all this European “stuff”.

One can have a walk around market in Isfahan for as long as the whole day. There are numerous semiprecious and precious stones, ready jewelry as well as simply packed turquoise, opals, garnets and emeralds. Gold, sweets, miniatures, graphics, carpets, shawls, copper dishes… Oftentimes a craftsman’s work is made before a buyer’s eyes. Fascinated, we stayed for long by a shop with kalamkars. 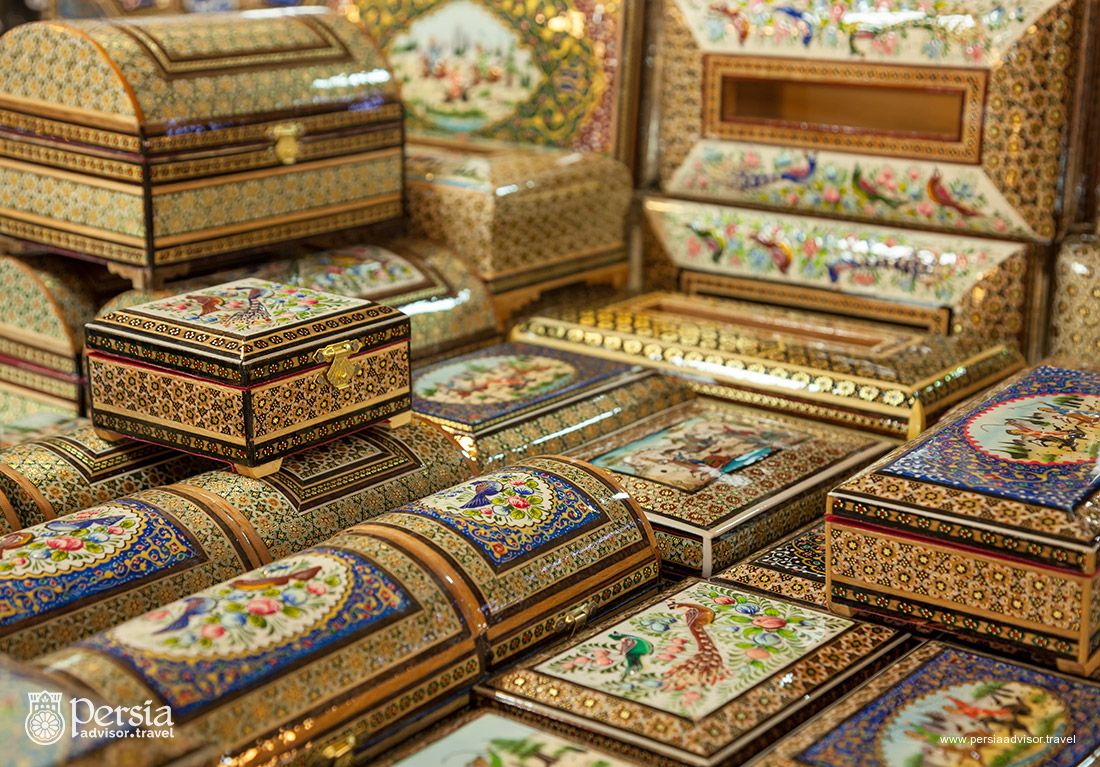 Art of their production first emerged in Persia back in the times of Safavid dynasty, in 16th century. Craftsmen from Isfahan came up with the idea of applying paint to fabric with the help of carved wooden stamps. Nowadays stamps are made of fine wood. They come in most various types and sizes and their cost is often very high. 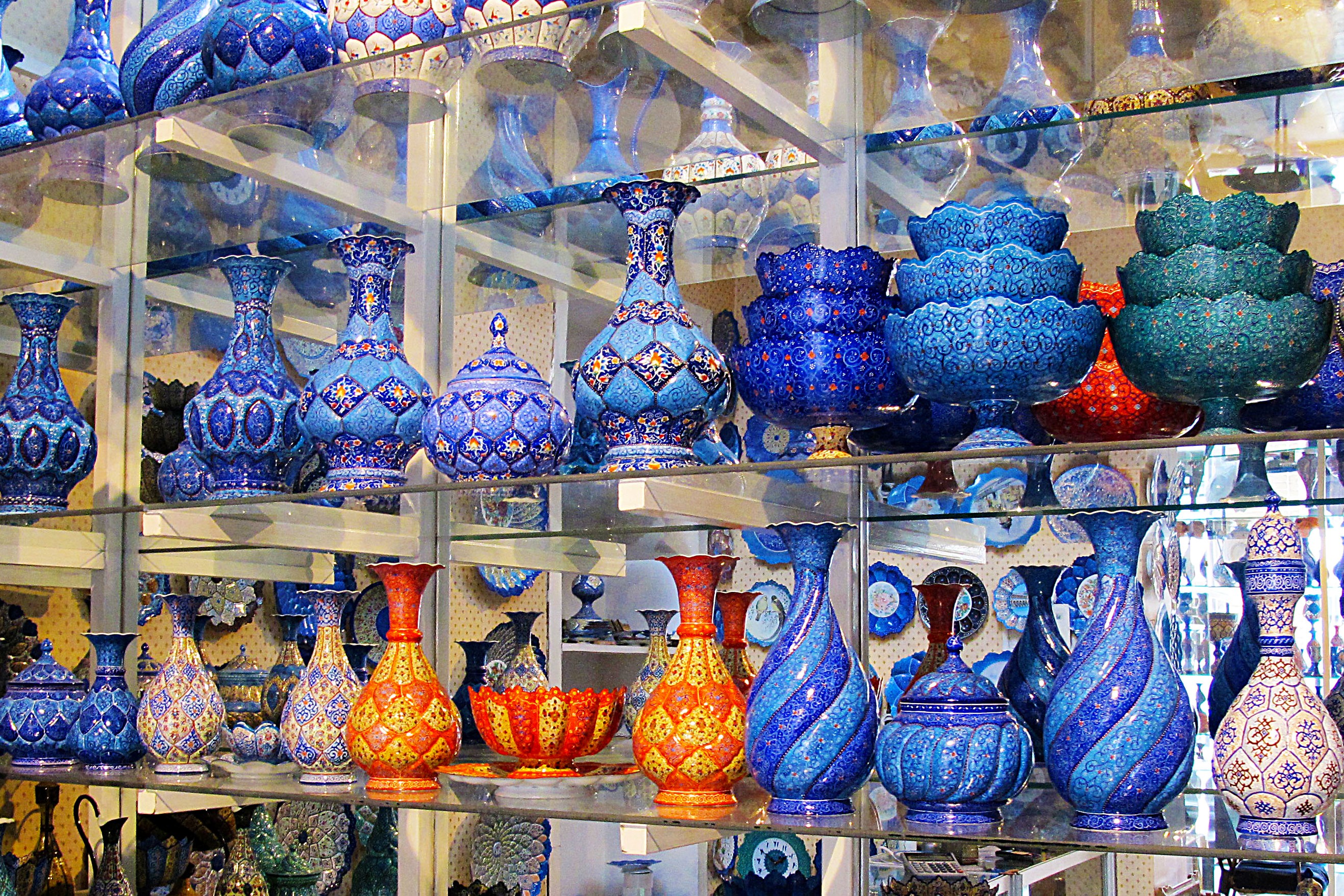 Work on a kalamkar is pretty meticulous. First, a craftsman applies contour, manually putting stamps on fabric. Further, fabric is colored, using red, blue, yellow and brown paints. On rare occasions they are left sole-colored. Cotton fabric itself is treated with tanning material that gives it beautiful matte shading. After a pattern’s application fabric is boiled for a long time and then put into cold water. The fabric itself is treated with fixing agents because manufactures are designed for the bright sun of Persia, therefore they don’t fade with time and don’t get damaged during washing. Dozens, sometimes hundreds kalamkars are left to dry on the roof of the market. When looking at them you get a feeling that there is a convention of Aladdins and it is them who left their flying carpets at a parking.

Iran: Fars province. Part 2
Elena Rasenko visited the incredible country of Iran, and has a pleasure to share with the readers of OUTLOOK her impressions! Today we publish the second part of these materials about this exciting trip! The word is it all began with the Elamites, an ancient Persian dynasty that came from the north to give rise to a unique civilization.