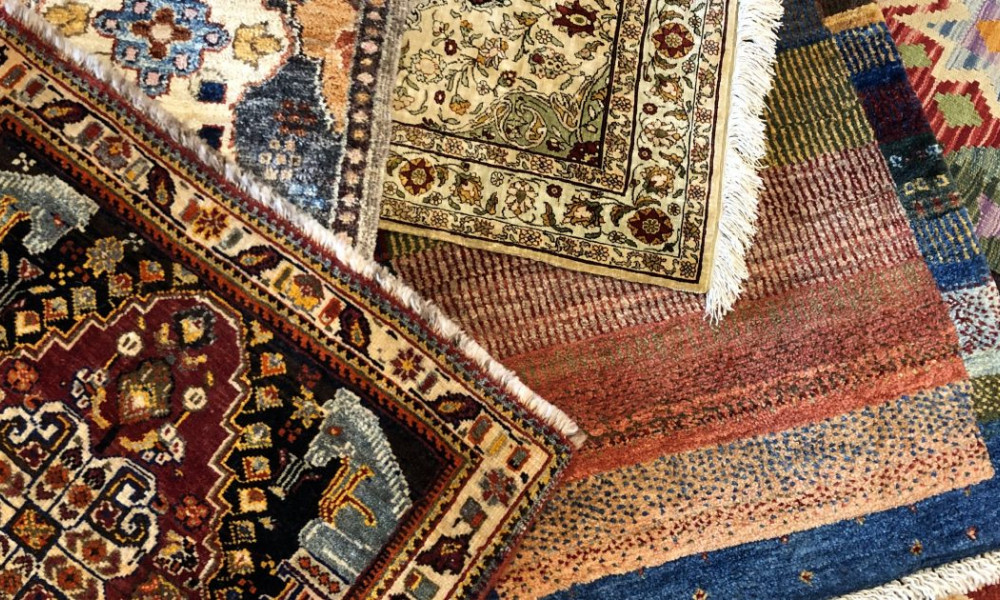 In those days when the Persian soldiers were second to none, and both the Roman Empire and the Arabian Peninsula were conquered by their power, skilful fingers of winner nation craftswomen created their first masterpiece. The carpet called The Springtime passed into history as the most precious of all time. It symbolized powerful rule of the Persians, and its beauty told about the divine origin of the king Khosrow I.

One hundred twenty-two meters long and thirty meters wide, it weighed several tons. The most amazing was its pattern: land on it was embroidered in gold threads, water was imitated with transparent precious stones, coloured gems gave the illusion of flowers and fruit on the wondrous trees. The legend has it, that when this culmination of artistic magnificence was spread out, the chamber got full of a spring breeze with its delightful aroma of flowers and joy. However, in the middle of the seventh century, the Arabs invaded Persia. The carpet was cut into small fragments and taken by the Arabs from capital of the Sasanian Empire.

The rich decor of oriental carpets still provokes delight and fascination. Sometimes it is impossible to take eyes from their florid ornamentation performed with remarkable precision of miniature. Nevertheless, Persian carpets are not only art, but also a deep symbolism which contains information about a bygone era, cults, stories of entire nations. They were also amulets that protect their owners from evil eye and wicked tongue. Among the most popular motifs of ancient Iranian carpets are fish, birds, animals, flowers and the tree of life. The latter was regarded as a sign of fertility, protecting oasis.

The majority of Persian carpets has a central flower. Its value is interpreted differently: God's all-seeing eye, lotus, mirroring pattern covering the inside dome of the mosque. If there is such a medallion, all other ornamental details are grouped around it. Woven handmade masterpieces are in high esteem for their quality, comfort and beauty. The average cost per square meter of woollen goods is about five hundred dollars, for silk pieces it is two thousand. If the carpet is old and even a centenarian, or made so skilfully that there is no equal, its price can grow up to six - ten thousand dollars per square meter.

While in the territory of modern Iran operate many factories where production of the thread grandeur rolls off the production line, true connoisseurs are looking for handmade works only. Tying together bundles and thus twining intricate pattern, a master puts part of his soul into this work, sometimes spending up to five years of his life per item.

First, master pulls threads tightly on the frame; then, as if mending holes, let them horizontally. So he gets a kilim, a basis of future product. Then the magic begins. Skilful hands entwine every two strands row by row, tying knots. Their type depends on the region of carpet weaving, local traditions and preferences of the author. The wefts are constantly packed down by comb-like instrument with long teeth, thus gripping and thickening pattern. After every seven - ten centimetres a carpet is neatly trimmed leaving a pile of desired length. The thicker the carpet is, the higher is its value. Sometimes, the number of knots in woollen carpets reaches one million per square meter. Even more in the silk works.
Photo naintrading.co.uk

At the same time, not cheap can be relatively simple carpets created by nomads using elementary weaver loom. They weave pattern from memory, use a coarse wool, and the density of their creation does not exceed one hundred thousand knots per square meter. However, in this case, highly valued is observance of traditions and art handed down by parents to their offspring.

The oldest in the world Persian carpet is now more than two and a half thousand years. It was found in one of the mounds in the Altai Mountains, where it was well preserved due to low temperatures. The finding was recognized as a sensation, because it became clear that after all this time, the technology of the eastern carpet making remained unchanged.

Another legendary woven representative of a kind in Iran is mentioned in the Guinness Book of Records. The biggest carpet, woven by hand, now adorns the floor of one of the mosques in the Emirate of Abu Dhabi. It is one hundred and thirty meters long, and almost fifty meters wide. This woven miracle weighs forty-eight tons. More than a thousand Iranian craftswomen had been working at it for two years. This magnificent carpet was brought to Abu Dhabi by two aircrafts. Its cost is about $ 6 million.