The most beautiful bench in the world is situated in Spain 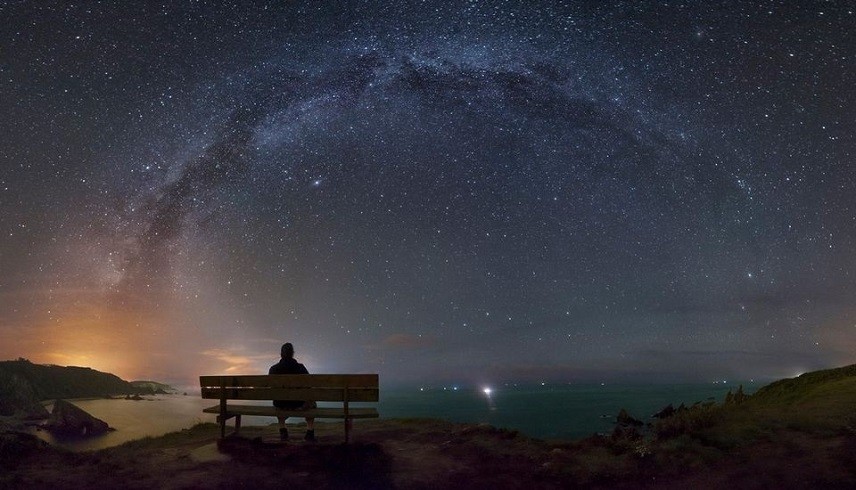 The bench itself is usual; however, the place where it is located is verily divine. It creates incredibly magical environment on the rocky seashore Loiba La Coruña where one may savor the majesty of blue abyss.

The bubble of the sea, sleepy glow of stars and flash lights of fishing boats – all that could be seen if one sits on the unusual, but such a close to heart bench. It is an atmosphere of real fairytales! It hides something mysterious and fascinating.

In August, at 3 am, Spanish photographer Dani Cachete took a wonderful shot of a bench – it has costed him for several weeks of expectancy. «A lot of time is spent for the search of this shot. There is a great deal of day photos, but I have waited for the verily moment of the Milky Way appearance. In this place it is very hard to see an unflawed sky at night. However, I kept my hopes up», as the photographer shared his secrets.

The exact shot became the winner of international project TWAN (The World At Night) where everybody who wants may participate, regardless of the fact whether he is professional photographer or amateur. The main thing in this project is so as to catch the moments of nocturnal world by a camera.

Such a modest bench conceals so many stories, a treasure of emotive power and beauty! Spain invites you to sit on the cozy bench, become amazed and experience the eternity of sea and human existence.

Spain will fine tourists for drinking bouts
The authorities of Palma, the capital of Spanish Majorca, will limit the sale of alcohol in the summer season so that drunk bad-tempered tourists could not flood the city.

The best cheese of Spain is announced
La Retorta is the mild mini-cheese produced from fresh ewe’s milk got the first place among Spanish cheeses. It has been recognized one of three best cheeses in the world at the last contest World Cheese Awards.

The festival El Cascamorras in Spain
The citizens of Spain admire festivals where they can look at others and show their advantages. It is worth to recall at least their numerous battles with food including La Tomatina as one of the most famous ones. However, at the festival El Cascamorras nobody throws food. Instead, people out stains onto themselves with oily substance and try to stain others.

The best country for travels alone is acclaimed
Spain took the first place in the ranking of the countries which are considered as preferable ones among those where it s convenient to travel alone. US News reports about that referring to the study of the company BAV Consulting and The Wharton School of Business of University of Pennsylvania.

Creation of Gaudi is to become a museum
The colorful house Vicens in Barcelona is to transform into a museum in 2016.

The star is to be named as a tribute to Cervantes
Several celebrities may boast of their own stars on the Hollywood Walk of Fame. Spanish people conjured the project considered as more majestic for their literal star.

The Spring Fair in Seville
At the beginning of May, Seville hospitably greets not only the citizens of Andalusia – the glory of local holiday lustered all over Spain. That is why it is important to see about the house and bullfighting tickets in advance.

In Valencia the Wind Festival is about to start
On the 11-th and 12-th of April, at Malvarossa Beach the greatest in Europe festival of kites will take place.

Carnival in Sitges
Between mountains and the Mediterranean Sea south-eastward from Barcelona, Catalan city Sitges is located. Having been under dictatorship of General Franco, it was, after all, the only place in Spain where counterculture throve. The city gained the character of bohemian one at the end of XIX century when there painter Santiago Rusiñol used to reside and work. Nowadays Sitges is known for popular beaches and living night life.

National holiday La Tamborrada in San Sebastian
Annually on the 20-th of January in Spanish city San Sebastian the national holiday La Tamborrada is held.
In Girona the biggest model of Titanic in the world will be built
In Spanish city Girona the biggest model of legendary liner Titanic will be built.
The main street of Barcelona will be covered with the “clever” dalle
The city council of Barcelona has made a decision to change pavement cover at the Diagonal avenue.
In Spain one of the most dangerous hiking path in the world will be opened
Royal path, one of the most dangerous hiking routes in the world, will be opened in Spain in 2015.
In Madrid the square of Margaret Thatcher is opened
In the capital of Spain Madrid mayor Ana Botella in grand atmosphere has set up the square named after ex-minister of Great Britain Margaret Thatcher.
La Tomatina in Spain
Tomato rivers run through the city streets and squares, walls of houses and everything around are covered with thick, scarlet mash tomatoes. No, it's not an explosion at a factory of canned tomatoes, it is one of the most exciting holidays in Spain - La Tomatina.