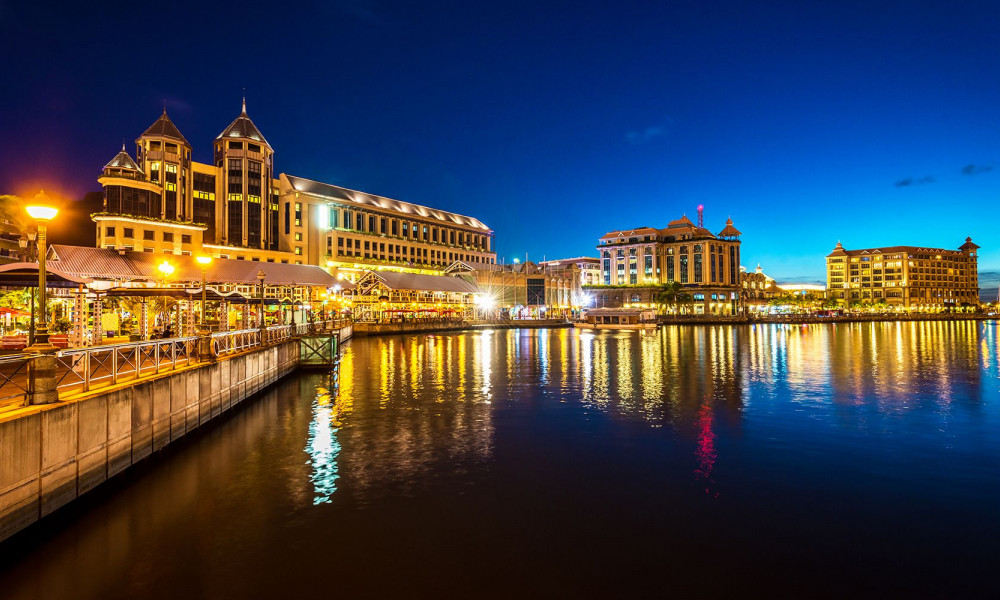 Barely noticeable speck of sand swaying in the waters of the Indian Ocean below the equator is an island of Mauritius. This green patch of volcanic origin covered with lush palm trees and eucalyptus groves, was originally discovered by Dutch colonists, and then equipped with the necessary amenities by the French and the British. The capital city has a name of Port Louis thus immortalizing the name of the King Louis XIV.

The Port Louis should be toured starting with the main street Intendans neighbouring waterfront and port, which serve as the beginning of the capital. Buildings define the atmosphere of the city, and the population adds charm and emphasizes the basic features. Algorithm of land development was multifunctional: ancient architecture blends with modern skyscrapers, mosques peep behind apartments and restaurants. And only between this and then lush palm branches remind us that we are in the subtropics.

The population takes over: European faces are replaced by slanting eyes, curly hair and African smiles. Nationality and religion go hand in hand and work in different niches: Indo-Mauritians are engaged in cultivation of sugar cane and fruits, the Chinese manage shops, Sino-Mauritians are retailers. Franco-Mauritians control sugar mills (the island holds the trophy in this production) and commercial banks.

The Blue Penny Museum has taken care by the Caudan Waterfront. This is a gallery of postage stamps, which stores the first samples dating from 1847 - Blue Penny and Red Penny stamps (actually, the one of orange colour and an error in the text: Post Office instead of Post Paid). But don’t errors daintify? Stamps with Queen Victoria's profile served as a kind of invitation to a ball from the governor of the island Sir William Maynard Gomm. Philatelists give it a special significance: for the first time outside of England there was issued such a document for mailing payment. Helen Morgan sank deeper and wrote Blue Mauritius treatise on the postal system of the island. Tourists can pass further to chambers of the museum and see how the people imagined the Earth in 1492, historical documents on pioneers, nautical maps and devices. See also: Mauritius: Between Africa and Asia, and with Europe in mind

China Town welcomes with "friendship gate" and moored to Royal Street. The name speaks for itself: numerous Chinese restaurants and shops catering noodles, mushrooms and therapeutic stuff. Asian temples are not on the way, but the beautiful mosque amazes with architecture. If traditional medicines made from herbs and snakes do not inspire confidence, Père Laval's Shrine promises to share the healing power. Eastern culture festival under the auspices of ABC Motors for several years increases impressions with its charm giving opportunity to learn the taste of China through traditional food, spectacular show and singing. To stir interest up, it also features competition for the best costume and Miss China Town contest. The equestrian competitions have special approach for choosing betting on horse. But if you are a beginner, you can try your luck on the race-course The Champ-de-Mars. The place steeped in history: independence was proclaimed there, and there is a monument to the King Edward VII.

The equestrian competitions have special approach for choosing betting on horse. But if you are a beginner, you can try your luck on the race-course The Champ-de-Mars. The place steeped in history: independence was proclaimed there, and there is a monument to the King Edward VII.

Observation decks always entice tourists giving a sense of freedom and views of the city. In Port Louis this function is performed by Citadel Fort Adelaide, the only remaining of four towers. In the early nineteenth century, its purpose was a bit different that is to protection against enemy attacks. Barbaric times have sunk into oblivion and now La Citadelle attracts spectators as the venue of colourful shows and international festivals. Food takes a huge niche in the life of the islanders, that is evidenced by countless markets and little bazaars. Bazaar at the Rue de la Cordero, covered market on the street Fakuar, the Caudan Waterfront and Craft Market Gallery are separate universes, impregnated with smell of spices and noisy disputes over prices. Central Market as a major figure of the merchant's life since the Victorian era caters various goods ranging from exotic mango to silverware.

Saying goodbye to the city, pay a visit to the botanical garden named after Sir Seewoosagur Ramgoolam, to witness the beauty of the huge Amazonian water lilies. Their competitors are baobabs and palm trees, almond trees and lotus flowers. Under French government this place was used to grow plants for the governor’s table. Today a tour guide accompanied by whispering orchids for two hours will tell you a story of a botanist Pierre Poivre who began to gather a collection of trees and flowers. Somewhere here a curious dodo bird was cleaning its feathers. It stood out with its beak and the inability to fly. Now it is a legend only since Mauritian bird is listed among extinct species. Entrance can be easily found owing to the main gate with unicorns, lions and giant baobab. Waiting inside, the Seychelles turtles and deer are ready to welcome you in and be your friends.

On the outskirts of the city there is a Sugar Factory which does not function, but tells the story of hard work and crop production. The museum consists of several rooms: the first introduces the history of Mauritius since a volcanic eruption. The next one may not show as in early June workers sharpen their machetes, but will describe a detailed production cycle from cutting stems till drying "honey" in tremendous centrifuges. One can indulge varieties of sugar and cane rum in the shop by the factory!

Mauritius: Between Africa and Asia, and with Europe in mind
Mauritius is a tropical paradise, for which the area of a small islands is enough to accommodate tourists coming from all over the world. This is a unique intersection of two continents, Africa and Asia, a fusion of diverse cultures, religions, and languages. The place, however, serve as a good example how to get along squeezed but pleased.