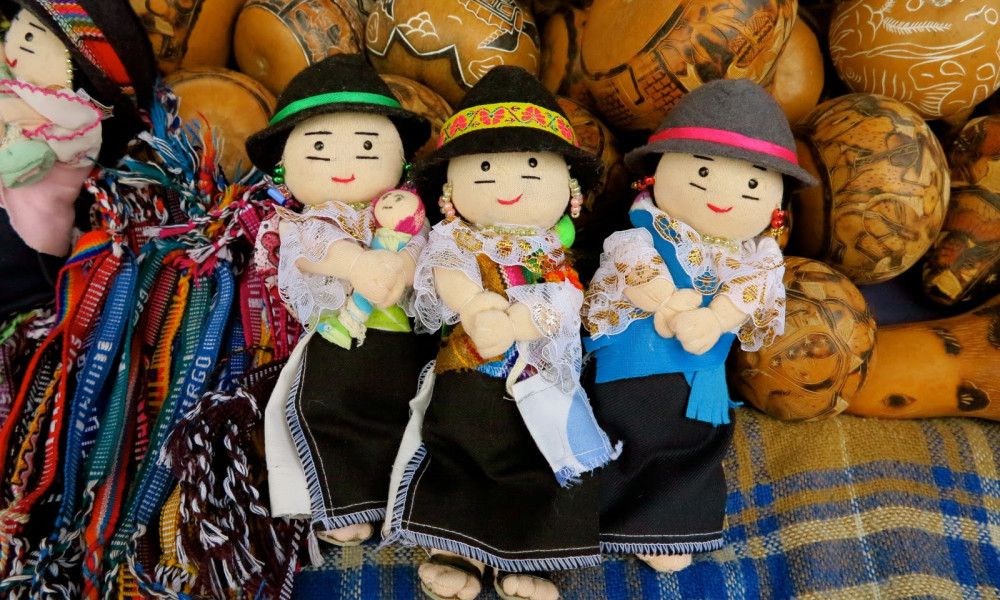 They didn’t get as much problems from conquistadors as other native people of Latin America had. The rumors touched the interesting fact how the inhabitants of valley Otavalo quickly reached royal chambers. They also were masterful in getting the cloth from wool of lamas and vicunas created by the Indians. Spanish men put a render fee to the high art while Otavalo citizens were called as ‘useful Indians’.

More than five centuries lasted when the citizens of Otavalo valley that had been situated near the foot of volcano Imbabura are still ‘useful’. They spin wool into yearn and put threads in the sophisticated patterns so as to sell the crafts at the weekly fair. At the weekends it is especially overcrowded in the modern city market. With the first sunrays the traders put lots in all the central part of the city. They knit, spin, and braid not getting shy under the glances of the curious passers-by. Nearby the product market is working. Indians bring to sell the lush greenery, fruits gathered the day before, grain, yoghurt, oil, honey, and cookery. After having heated up the portable ovens, they fry meat, potato, bananas, and avocado for everybody who wants that. In the market days there are many people in Otavalo. Quite frequently the sellers come with their families. There are crowds wandering between the ranges of customers. For many foreigners it is the compulsory part of Ecuador visit to be at the fair in Otavalo. This is one of the oldest markets in South America. Today it takes seventeen city squares. People talk a lot outside the firm-land about its wildness of colors and ethnic picturesque atmosphere. One is able to buy the warm poncho, colorful shawls, a bit funny and shrill but pretty caps, socks and scarf, filled with the pictures of the native citizens of America carpets, blankets, toys, as well as the famous thin woolen fabric. There are various amulets, pictures of gods, and magical symbols on the cloth. By the way, the hats have gained a special popularity among gringo. They are made from the subtle straw, and beautiful beige colors. Their sellers run out of them to lunchtime. One is able to buy a comfortable headwear in Otavalo for 15-20 dollars. However, the gapers most often gather in the part of the market where penacho are sold. These are Indian headwear connected in the mind of foreigners with the descendants of numerous continent tribes. The merciful sellers allow to the curious people not only to hold the creatures from feather in the arms but also to take several photos. It is hard to look up from the citizens of the valley. All of them are short. The majority of them wear national clothes. The men are dressed in light or black trousers, thin poncho with muted ornament. Their heads are decorated with the caps similar to cowboy hats with the long thick and black like a crow wings braids hanging out from the headwear. The men have one braid while women opt for two. The female costume includes white blouse embedded with the bright threads, dark piece of cloth that serves as the long skirt if folded right. Another piece of fabric of the same size is put on the head. Women and girls have many-layer golden beads on the neck and red coral bracelets on the wrist. They have started to wear in such a way in the primary school not changing the taste till the old age. Nevertheless, going through the trading platforms the experienced travelers advise to look attentively to the good and salespeople. Recently at the fair the goods from China and Peru appeared pretending to be local one.

The citizens of the city not busy with the trade spend their free time at the central square. In the evening there is music, and little cafes invite guests to taste the winy chichi prepared from seven kinds of corn, try tortillas, beans, frittata, and tea with coqui frogs. In the central church there is th liturgy while in the overcrowded street cinemas the Hollywood films are demonstrated.

A bit high under the city there is a park, the conservation for condors. It was opened in the hope to create the benevolent conditions for the predatory birds that are respected so much in Ecuador. The workers of conservation park care about the birds, grow small birds and look after their safety. When birds are getting bigger, they are set free in the environment comfortable for them. Apart from the condors there are harpies, eagles, hawks, and owls. In the evening at the area of the park there are performances with the participation of condors. On the other side of Otavalo there is a unique eucalyptus park with mineral sources, narrow path, transporter bridges, and noisy waterfalls Peguche. The old Indians considered these waters as sacred and quite often came here to get power. The hippie who arrived there felt comfortable near the sources. They live there during the year playing the guitar in the evening.

Furthermore, a bit far from Otavalo in the crater of sleeping volcano there is an amazing lake. After the last ejection the mountains transformed into the hill overlooking the center of lake Kuikocha. The local shamans are still using lake as the place of cleansing. The courageous travelers are offered to go along this lake on the boat warning about the big depth of the reservoir while those who love hiking are able to go around Kuikocha for a day. Those who prefer swimming in the lake notice the incredibly warm water there. It seems it is heated by the petrified volcano. Though the locals claim that it is sleeping, they are apprehensively listening to any noises from the sides of water. Leaving the area of Otavalo one should get to the village Kotakache. People go there in search of the leather goods that are not so fashionable but well-made. Their production takes nearly several thousand people. There are bags, suitcases, jackets, hats, and boots. In the fair days the salespeople are ready to make a discount up to the half of good’s cost.

Cuenca is the cultural capital of Ecuador
They say that Cuenca, the one in Ecuador, is the best city for loafing. And there is a good reason for that. About ten thousand pensioners-expatriates insist on that. They’ve concluded their working careers somewhere else in their motherlands and moved to spend deliberate senior years in this Latin American city that is spread on the way from the Andes to the coast of the Pacific.