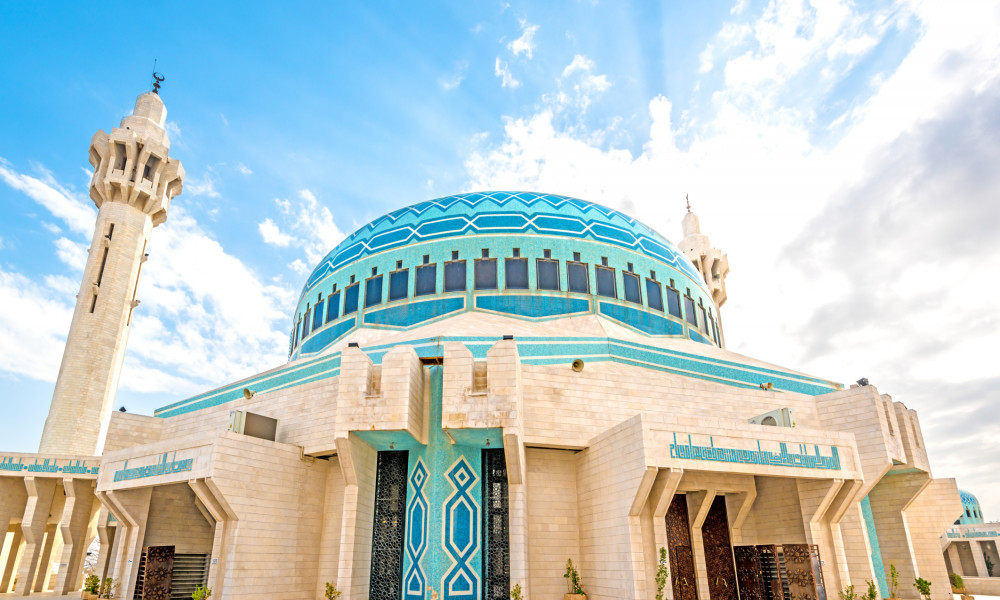 Half of the population of the Hashemite Kingdom dwells in Amman. Ramified suburbs, straight avenues, beautiful houses with huge satellite antennas, olive trees and even gold-gilded trees. These are its rich suburbs. In a cramped centre of Amman traditional craft stalls and shops, cookshops and numerous monuments of architecture are concentrated.

History of Amman accounts for about nine thousand years. First fortress emerged there in the Neolithic Era. In the middle of the Bronze Age the famous Citadel was erected, its walls are still preserved nowadays. Back then citizens of the polis were already engaged in active trade with Egypt, Cyprus and other countries by supplying delft ware, alabaster vases, spicery and animal figures there. In due times lands, on which Amman is spread today, were conquered by Assyrians, Babylonians, Persians and Romans. In the period of reign of the latter ones the city acquired a new face. Columns, Roman baths, theatres and fountains, specific to the Empire, emerged there. Byzantines, who came later, made a Middle Eastern center of Christianity out of Amman. Further the city got into the hands of Muslims. And in times of the Ottoman Empire it fell to decay. By early nineteenth century it was inhabited mainly by Bedouins. Amman acquired second momentum for development with a wave of immigration of the Circassians from Caucasus. A lot of craftsmen happened to be among them. It was them who built roads and connected the polis with other cities. Amman turned into a busy Middle Eastern center where nearly three million people live. In places of dilapidated constructions expensive hotels, restaurants and business centers grow, luxurious villas are built. Amman persistently growth broadwise, spreading on hills and plateaus of the desert. Initially it occupied seven of them but currently its erections rise on nineteen hills. Due to such geographic peculiarity names of all of its districts begin with the word “jabal” that translates from the Arabic as “mountain”. 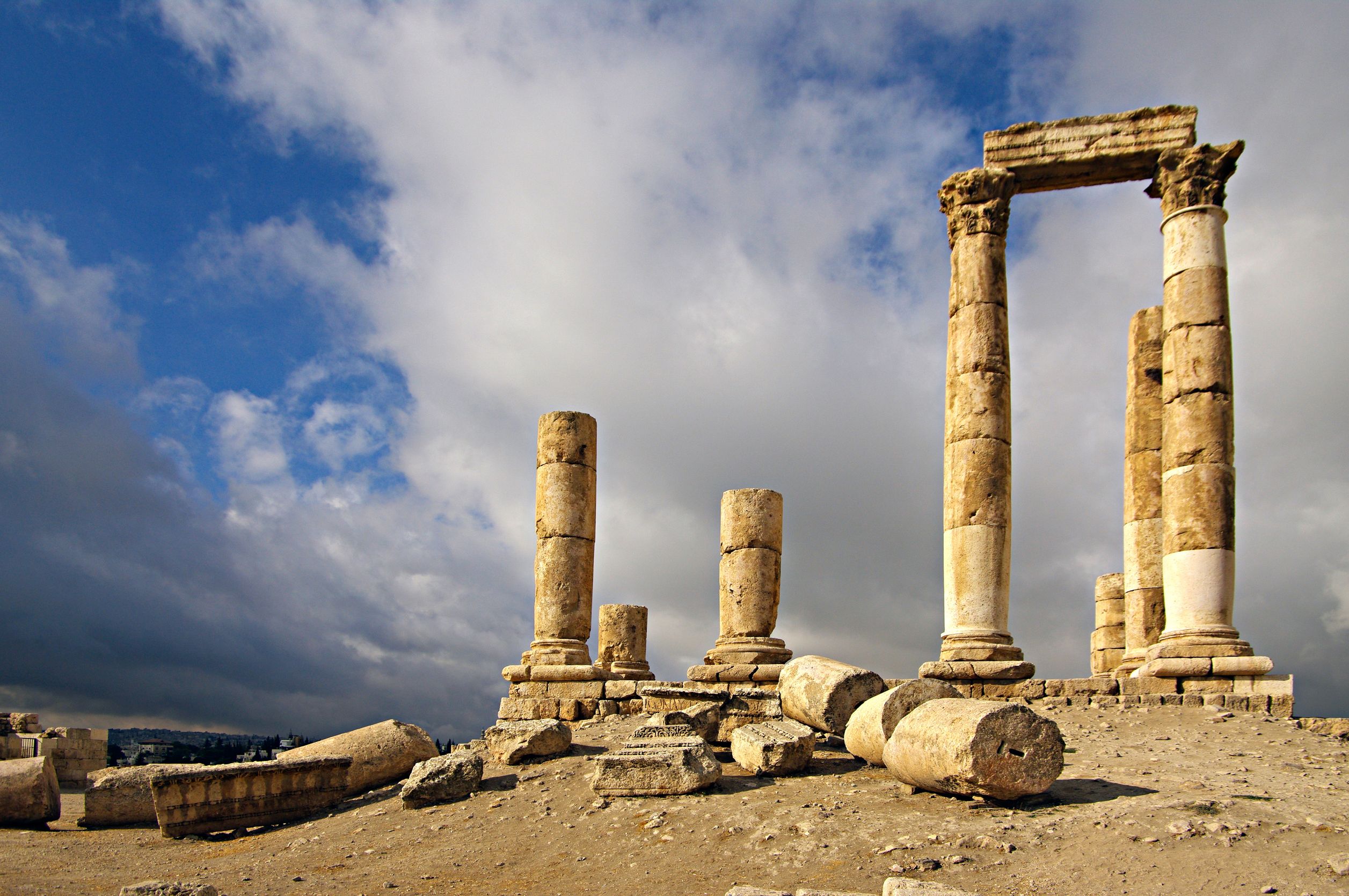 There are several reasons to see the Citadel. First of all, in its very place once a city stood, from which glorious history of Amman began – Rabbath Ammon. In the vicinity archeologists find various artifacts connected to Roman, Byzantine and early-Muslim periods till now. Museum of antiquities is opened there, too. By the Citadel almost destroyed Umayyad Palace, Temple of Hercules, preserved since times of Marcus Aurelius, and a very old Byzantine church are located. Second, from the hill, where it is situated, a mind-blowing view on almost entire city opens, including renovated Roman theatre, where performances are still held, Roman forum with a colonnade, Nymphaeum and King Hussein Mosque. Third, there, as nowhere else in Amman, it is customary to expose your cheeks to warm winds, forget everything for a minute and sit in silence warding off fussy thoughts.

In the city itself there are quite a few museums, exhibition and culture centers and children’s entertainment grounds. Rich motor vehicle fleet of King Abdullah II evokes special amazement. Expensive and rare cars are his weakness. And he is eager to share this weakness. No one is allowed to drive them, of course, but everyone can admire his rich auto collection. Among exclusive exhibits there are armored Rolls-Royce Silver Ghost, Tatra produced in 1937, Roadmaster Convertible Coupe, Ford Pilot, Mercedes-Benz 300 d Cabriolet, posh red Bentley of 1961 given by the king to his wife. All in all there are over seventy cars. 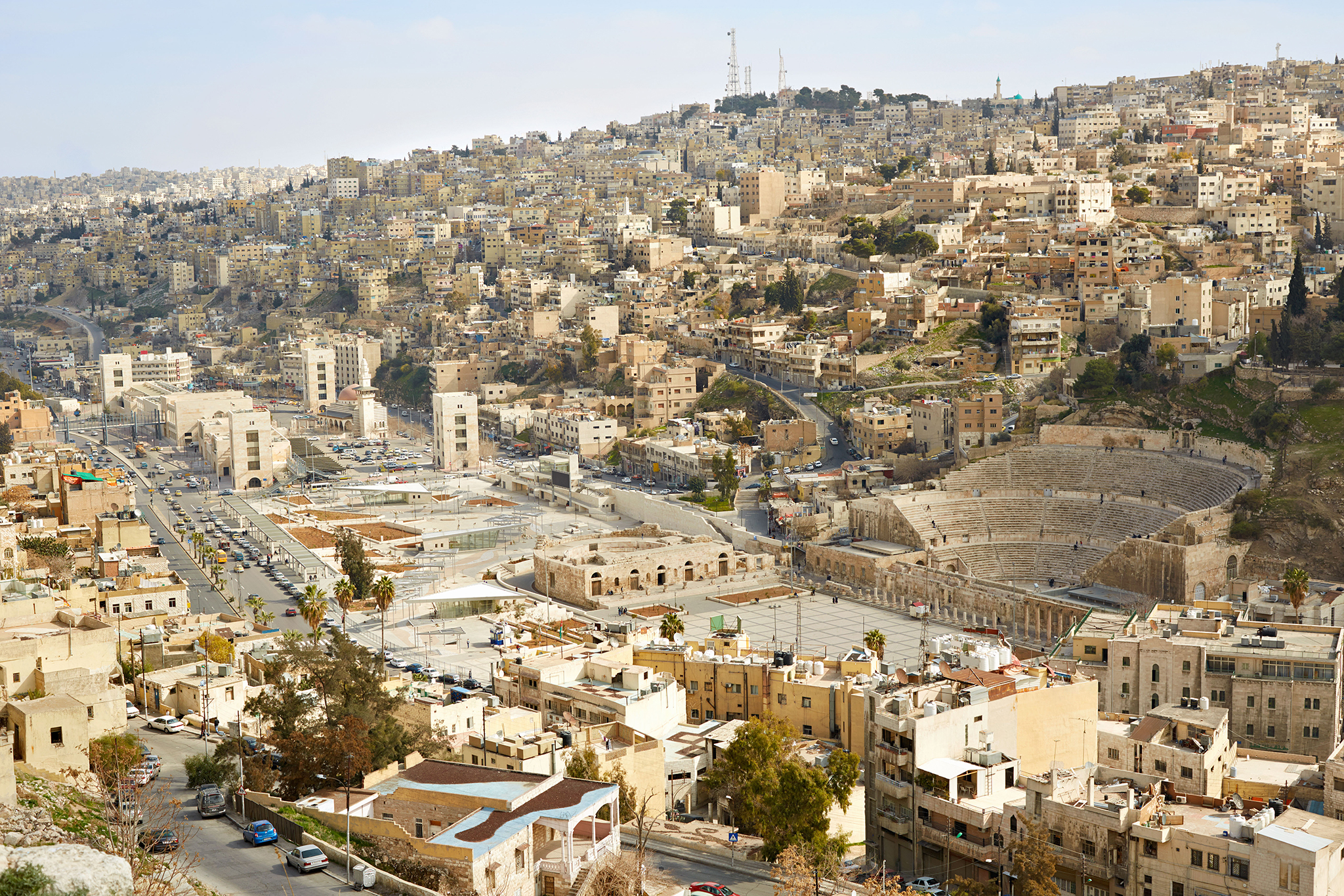 If you really want to ride around the capital of Jordan, you should do it on a retro train that shuttles along a special sightseeing railway called Hejaz. The train of early 20th century is interesting itself. It once played an important role in fight of the Arabs against Turkish invaders and Lawrence of the Arabia himself was its passenger.

In the city there are numerous sports clubs, organizations of fans of horse riding, golf, hand gliders, running, football and bicycling. National King Hussein Park is laid in its western part, there studios of Arabic calligraphy, painting with natural materials and stone carving operate. One of Amman’s largest concert halls is situated nearby. In summer annual festival dedicated to culture of the country takes place there. 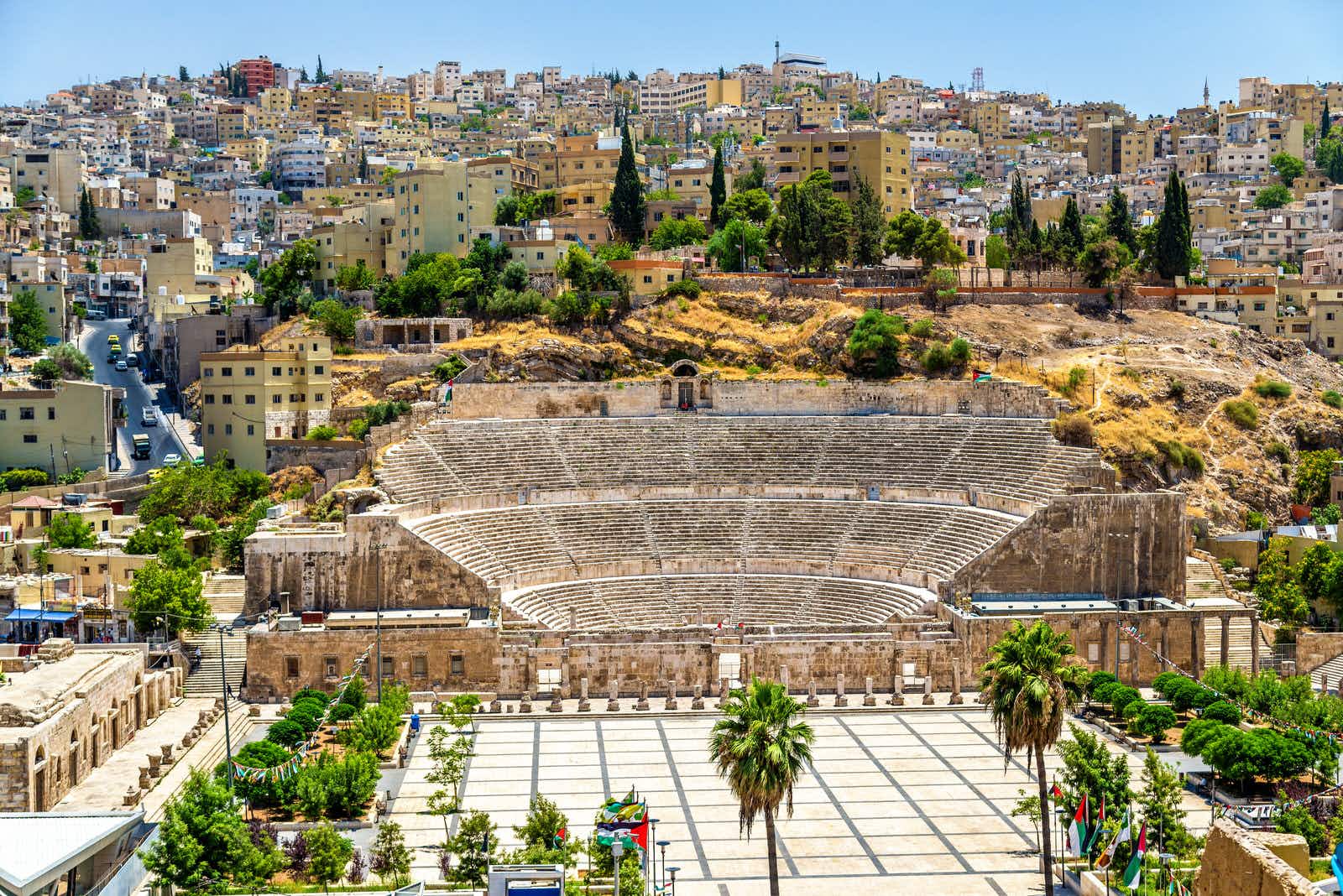 Still, it is only possible to feel real Amman upon having a tour around it on foot. Relishing it step by step, it is worth to walk around fashion boutiques in Abdoun and Jabal Al Hussein, purchase carpets and pillows, traditional pottery, silver items decorated with semi-precious stones, copper coffee pots, sharp bedouin knives, ornate hookahs made with hands of skillful hands of craftsmen and antiquities. Souk is penetrated with a special smell of spices; there, alongside everything elese, there are a lot of cafés with hot brown half-light. Tangy smell of cardamom and eastern delights normally dwells there. The latter ones are so tasty that upon purchasing a box it is hard to deny yourself a pleasure of eating half of it at once. Instead of sugar, honey is often added to deserts and confectionary is strewed with pistachios to make it not just tasty but also healthy. World-famous beauty products made of therapeutic mud of the Dead Sea enjoy special popularity in Amman. 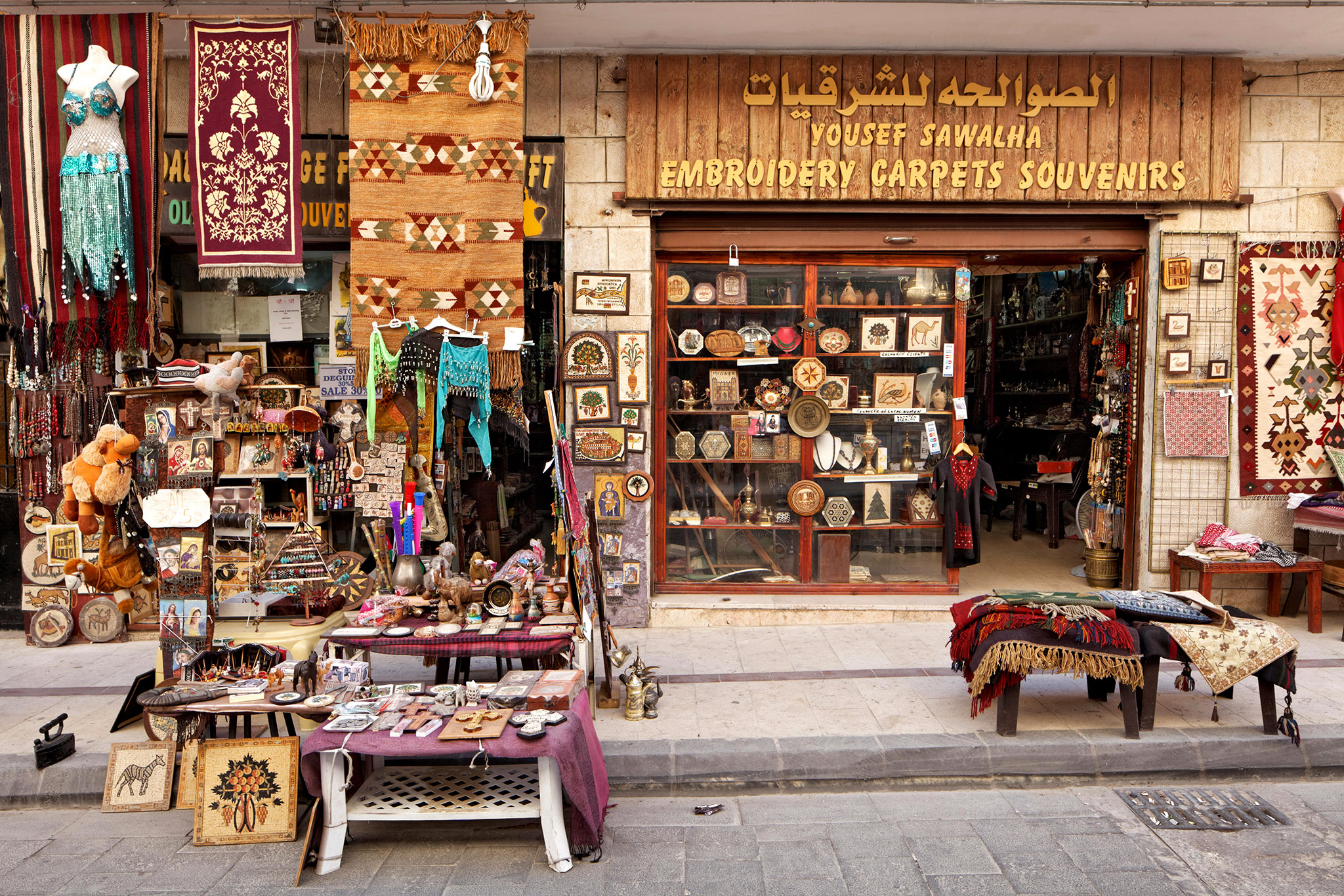 Amman resembles London somehow. Just as clean, prim and elegant - only in eastern manner. Almost all citizens of the capital speak English and are glad to help a globetrotter to find a proper route. You can also ask for directions from policemen. Local law enforcement is considered the most honest in the Middle East. They don't take bribes and conscientiously maintain order everywhere including roads. Therefore there are almost no daredevil drivers. It is calm in the city at night, too. One can safely walk its streets in complete darkness.

Highest buildings in Amman are hotels and trade centers. Citizens prefer living in 4 or 5-storey houses, two appartments on each floor. Appartments are spacious: three rooms, a kitchen and a hall, several toilets and a garage. Houses are very similar to one another. Nearly all are of the same hieght. Roofs are horizontal with metal dowels sticking out virtually everywhre for future constructions. This is for the children to be able to add a floor or two for themselves. Ammanians use roofs of their dwellings for rest, kids play there, women hang clothes to dry. Besides, potable water is preserved there. Whealthy citizens, in their turn, live in spacious villas with gardens and vineyards in suburbs - on tops of hills. Fresh winds blow there and it is a little cooler than in lowlands. 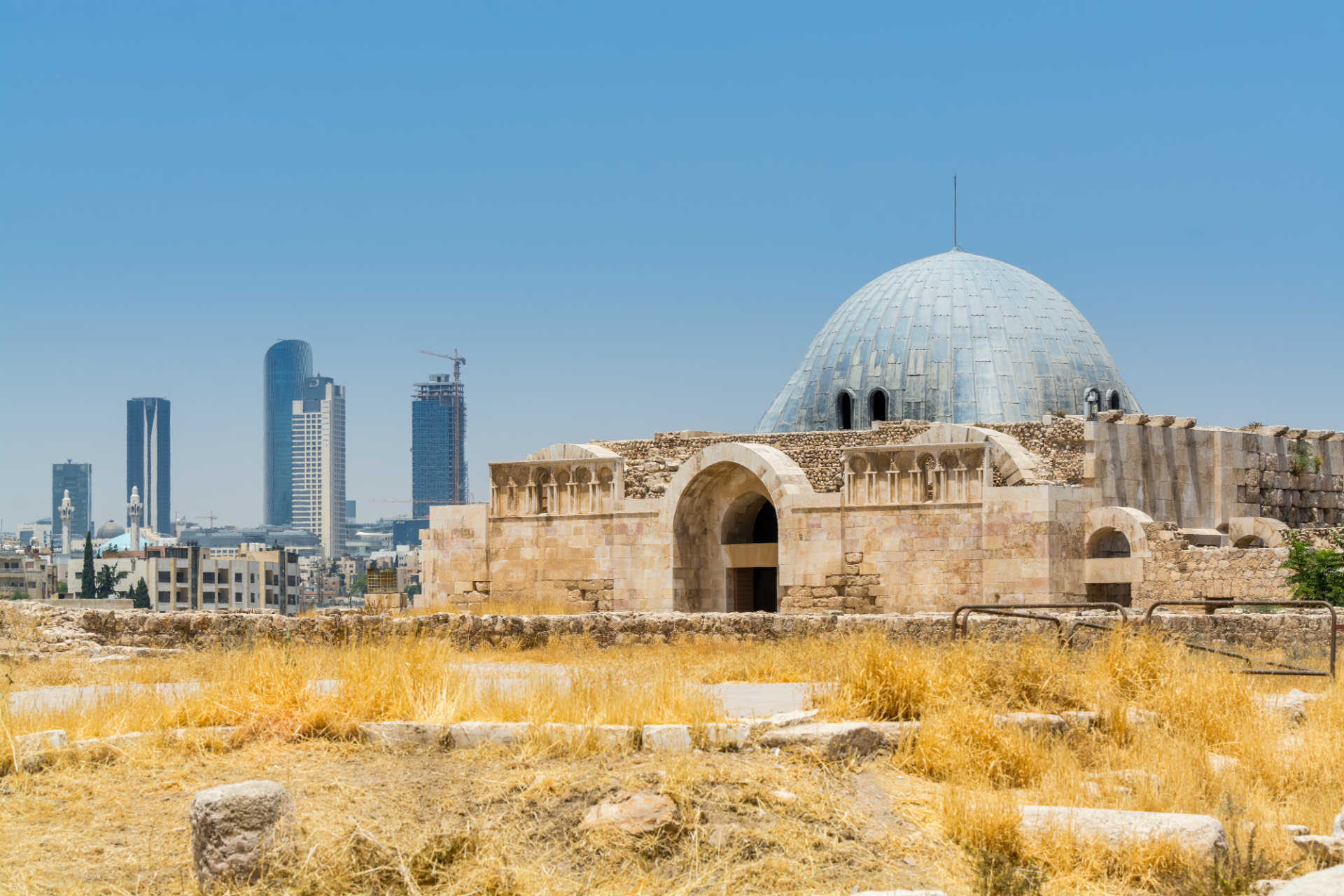 Ammanians love their country and their city a lot. There is a good reason why probably the largest state flag in the world streams over it. It hangs on a flag pole 140 meters in height. And the size of the canvas is equal to a small football field - 45x65 metrs.

Pompei East: Jerash
I put my finger into the gap of column, froze for a moment and cried out with delight - it moves! There was a heavy stone pillar above my hand, once carved and piled up on a pedestal by some Roman architect or his Arab assistants. This amazing column and hundreds of others alike are a part of the ancient city of Jerash situated in the north of Jordan.