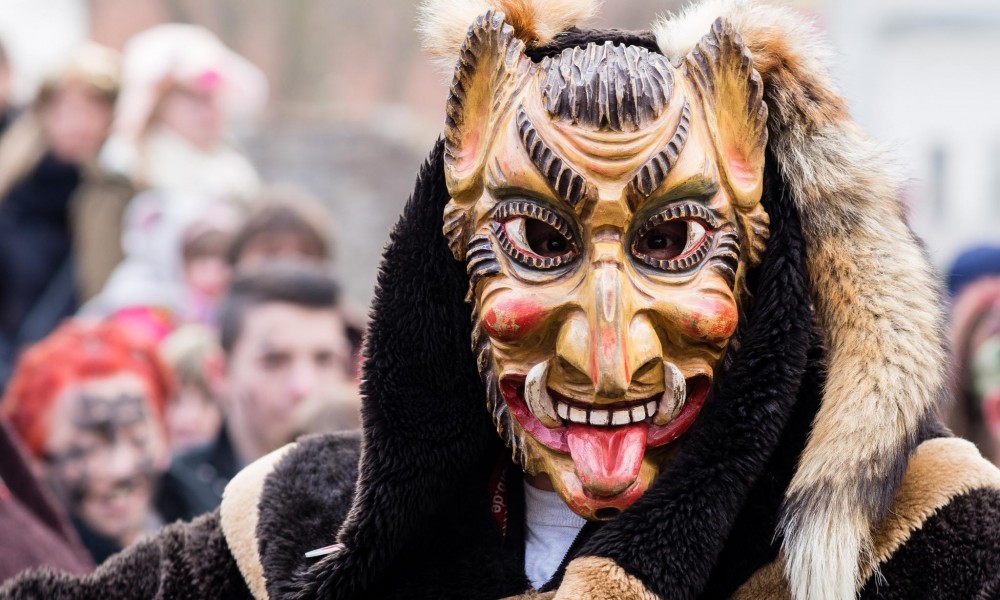 In February Switzerland changes beyond recognition: reckless power of pre-Lent carnivals, insatiable gluttony and cat’s choirs of Guggenmusik rush into the streets. Only evil spirits are kind of weak – same glamorous vampires and emaciated zombies. Want it to become really scary? Head to Lötschental Valley to celebrate Tschäggättä: infernal characters from Alpine folklore will haunt you in your dreams!

Ages ago, having abandoned hope to eradicate pagan rituals of farewell to winter in young Swiss Confederation, the church has given people three days of happy frenzy prior to the Great Lent – from the Dirty Thursday to Fat Monday, besides Saturday and Sunday. Upon distinguishing ringing voice of awakening soil in cacophony of nation-wide jubilation, shrewd practical brain would be sprayed easily and joyfully with multi-colored confetti sparkles so that sprouts of new hopes and beginnings to spring from them soon. In unstable period of seasonal change, it is important not to let spires of the new world die under strikes of frost. Thunderous flutes, bagpipes and drums of Guggenmusik performers chase out spirits of winter, mingled in the crowd.

Present-day Swiss do not recognize spiritual leadership of medieval clergy yet they still believe it to be their duty to give a carnival on the occasion of Mardi Gras. Fame of Fasnacht of Basel resounds throughout Europe while thrill-seekers hurry to get to Monster Parade in Luzern. In Bern, Zug and Solothurn they fast family-style without planning anything grand. However, old-time residents grumble that all city carnivals have been spoiled by Hollywood anyway. It is only possible to see ancient celebration of Mardi Gras days in its pristine state in Lötschental Valley, cut off from pop culture with steep peaks of the Berner Oberland and the Valais Alps. Instead of Fasnacht, dwellers of local villages celebrate Tschäggättä, hurrying to pay respects to overthrown winter goddess – or she may get angry and pull some dirty trick for last.

Fairytale witch Tschäggättä is mentioned in Alpine mythology as one of incarnations of malign fairy Perchta who reigns in mountainous regions of Switzerland, Austria, Bavaria, Swabia and Tirol in cold season. Afraid of intrigues of the quarrelsome sorceress, countrymen sacrificed to her well-fed stock and orchestrated merrymaking with disguised people representing ugly goat-like creatures from her entourage. There is a good reason why Tschäggättä-Perchta ended up in such company: image of a goat in pre-Christian ritual practice of Indo-European peoples was associated with fruitfulness and vivifying powers of soil stemming from primal chaos of nether worlds.

The less people depended on mercy of nature, the kinder and more humane ancient deities became, farce came in place of fear. In isolated mountain settlements power of the element is stronger therefore pre-Lent celebrations in Kippel, Blatten, Wiler and Ferden stick stubbornly to slightly creepy distinctive local color. No gloss or social polish there – deep-seated fright of prehistoric ancestors before lengthy hungry winter is felt for real!

Scary-looking masks carved from Alpine strike imagination with masterfully executed facial expressions. Through layers of paint and polish, distinct signs of a criminal nature according to Lambroso system stand out: massive superciliary archs, sharp prominent cheek-bones, heavy jaw and a predatory grin of large bovine teeth bode no good, and through matted tousle of goat hair, sharp horns protrude. Ancient masks passed from generation to generation are valued most. Each settlement nourishes and cherishes original traditions of artistic craftwork – the ones that Agnes Rieder, hereditary craftswoman who owns the richest collection of Tschäggättä masks in Switzerland, will willingly tell you about. Agnes’s studio in Wiler is open for visits in February and March.

Formerly only young single men were allowed to dress as Tschäggättä; nowadays anyone who feels like it can take part in merrymaking, including schoolchildren. On Dirty Thursday, while getting ready for a solemn procession from Blatten to Ferden, participants get dressed in pants of matting and short sheepskin coats turned inside out, sheep and goat skins are thrown over back and front for the body to look more imposingly. They hang copper bells and a small cauldron for offerings on a wide leather belt. It is customary to wrap sacking around footwear – otherwise fellow villagers will be able to tell who of their neighbors distinguished himself during celebrations. Having refreshed oneself with an odorous plum brandy, disguised people get back to their villages and begin their hunt for tardy travelers and sweet girls. Those, who fail to hide upon hearing melodic chime of bells, only has him or herself to blame: a pack of daemons surrounds a victim instantly to keep throwing snow at him or her till poor things offers a good ransom. Should you have no chocolate or apple or a couple of crumpled bills, boogeymen will smear soot all over you and land on you several slaps with an ice-covered glove.

Uncrushable vestiges of paganism have annoyed clergymen downright. In the middle of 19th century an ardent catholic priest from Kippel tried to forbid Tschäggättä and persuaded municipal authorities to introduce fines for participation in street games and carnival processions however countrymen had solid reasons to keep fidelity to customs of forefathers. Under conditions of puritan morality, the festival was entrusted with an unspoken mission of family planning. In disguise a young man could come to see a girl he liked without risking to compromise her reputation in the eye of a community. For many natives of Valais canton Tschäggättä is an integral part of family history that reflected in memories of bank clerks and hotel managers those bold escapades of grandfather, romantic dreams of grandmother, invisible presence of mysterious powers in pre-evening blue and hot breath of chase behind your back.