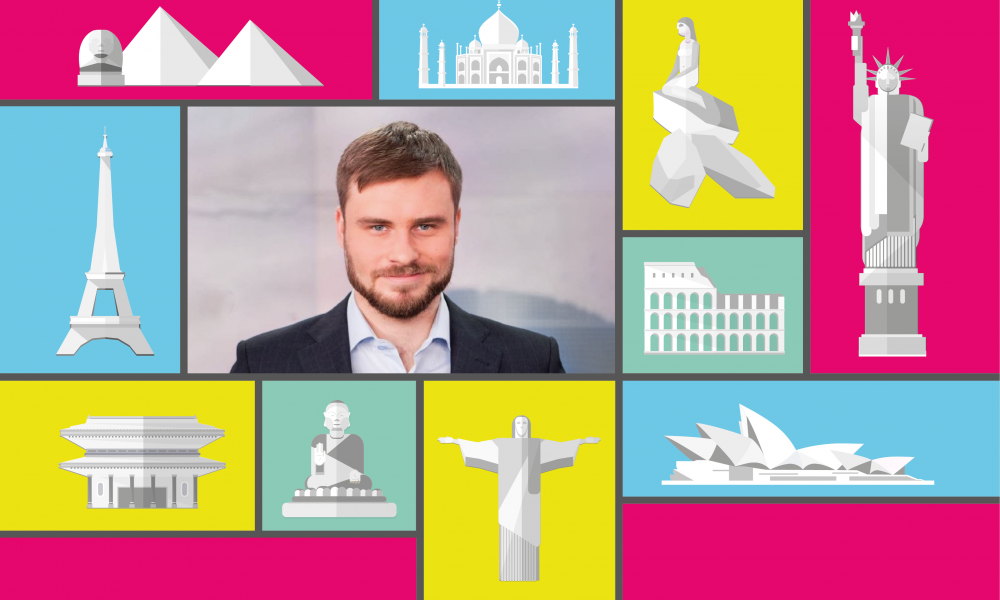 In thid column we talk to famous people who, despite their tight schedule, cannot imagine their life without travelling. Today in the spotlight: journalist and anchor at 1+1 Channel Yegor Gordeev.

I visited almost every European country, North Africa and I’ve been to Asia.

But it still doesn’t seem enough. Trips change people to make them better – I’m 100% sure about that. To me, there is no better way to learn this world.

My first trip abroad was to Vladivostok.

This trip took place when I was a little child but it got stuck in my memory for the rest of my life because my parents and I were going to Vladivostok from Kyiv by train. This voyage lasted for eight days and it seemed like it would never end – by the time we arrived I knew almost entire car by names and addressed passengers in no other way but Mr. Vova or Ms. Lena. Except for slowness of the train – starting from Ural Mountains its speed hardly exceeded the one of a pedestrian – endless Siberian and taiga landscapes stand out in my memory. Such an incredible beauty.

I’m always at a loss when asked to advice this or that country or state to visit.

It all depends on a person, if my friends or acquaintances ask me that, I have at least a rough idea about their interests and tastes. As to strangers, the only thing I can advice is: do travel.

If I bring something somebody from my trips at all, it is alcohol.

Least of all I understand endless picture-taking, shopping and souvenirs-purchasing that no one really needs. Truly close people you love will be manifold happier to hear your stories about a trip and how great you spent your money there than to get a useless statuette that will only get covered with dust… If I bring somebody something from my trips, it is alcohol. I like to believe that aside from good mood I also bring a piece of air and atmosphere in a bottle.

I cannot say that I will never again visit a country or a city.

I am never disappointed about new places. I generally try not to addle brain with somebody else’s clichés and stereotypes like “Paris isn’t the same any more; it’s dirty and full of migrants”. By the way, I adore this city. It is great even with is “problems”, because they are an integral part of it, they are its feature. And to fall in love with Paris it takes to have at least one walk outside touristic routes, because as nearly as entire city is an amazing combination of fantastic landscapes, interesting places and people. When there, you shouldn’t recall a classic who said “To see Paris and die” while you cannot figure out why and where you are supposed to die. Discover this city in your own way.

Every country where I feel free and can do what I like, could become my second home.

I am probably a cosmopolitan and I could live everywhere therefore it is hard for me to say: “This, this is the place that can become my second homeland”. It would be nice to live in Berlin for a while – it is alive, it is world’s art capital and something constantly happens there. Portugal is a great and stylish country and it also has ocean. And you know what, have you ever seen landscapes of India? It is as if reading Kipling with everything not just in your head but also around you. So, no, I don’t know yet where I’d like to live…

I recommend beaches to everyone…

There is nothing I can tell about holidays on a sun lounger by a pool with breaks for food and drinks in all-inclusive system. I simply have never travelled like that.

The most unusual dish I tried was in Italy.

Truth be told, I’m not much of a gourmet but once somewhere on a route near Rome I tried pasta at a small but cozy Michelin restaurant and I still can’t forget it. How much it cost, how was it called, what the ingredients were – all of that slipped my mind, but I sure know that I’ve never tried anything tastier. But all in all I think that if you sit in a café in Spain it doesn’t matter that you eat some ordinary food like, say, fried eggs, same as ones you have at home – there is still Spain around you and that’s the charm of it.

What stroke me the most was that Europe isn’t black-and-white with native citizens and troublesome migrants but that it is a single mechanism.

Once, my friend and I happened to be at Turkish quarter in Vienna. It was one of the first trips and it felt uneasy, even more so because there was some sort of tension and there were raids on foreigners in the quarter. So, when we could have suffered in the heat of the moment, people protected us and explained to locals that we were tourists not “more newcomers” and that we had nothing to do with their arguments. They helped us safely get out of the area afterwards. So everywhere and anywhere there are good people and bad people, however threadbare, but that’s the truth.

One of the last places I visited was Iceland. I have always dreamt of going there.

Packed and Ready: Pavel Kazarin
"The routes that we choose hide our collective Freud, Jung and Fromm", Pavel's stories lead to deep thoughts about the true reasons for our desire to travel. A peremptory clever fellow of the morning show Ranok u Velykomy Misti/Morning in the Big City on the ICTV channel, a political columnist of integrity and simply the smart man Pavel Kazarin revealed to us the secrets of his travels and gave interesting advices to fresh tourists.

Packed and Ready: Sergey Gulyuk
In our new column we talk to famous people who, despite their tight schedule, cannot imagine their life without travelling. Today in the spotlight: journalist and anchor at 112 Channel.