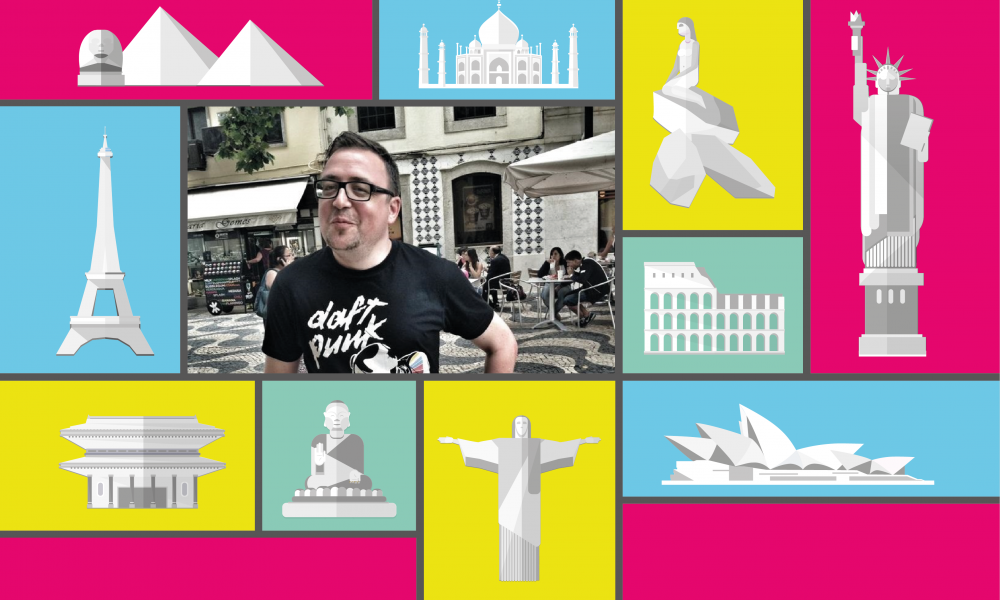 In our new column we talk to famous people who, despite their tight schedule, cannot imagine their life without travelling. Today in the spotlight: journalist and anchor at 112 Channel.

My first trip abroad happened in 1984 when I was just a Soviet pupil and visited socialist Bulgaria. Even though actually it was close ideology and the country was friendly to USSR, it seemed to me that I came to the true capitalism described by the commentators of the program ‘Time’. I also remember myself experiencing incomparable feeling of tasting earlier forbidden fruits. For instance, for the first time I saw the true Coke in the branded bottle and discovered chewing gum. I recall a funny occasion from the trip which clearly demonstrated the huge abyss between us and foreign country. Particularly, I saw how on the sunny Bulgarian beach there was a real and exotic for Soviet perception punk with green color Mohawk walking slowly. Some sensitive boy from our group saw this scene, ran to his mother and shouted out loud: ‘Mum, mum, I have just seen a Wonder!’ Then everybody started laughing Three ‘must see places’: London (incredibly, wonderful people, the combination of different languages, matching of multiculture with conservatism and loyalty to traditions), Lisbon (breath of ocean, careless and relaxed rhythm of life, incredible beauty), Amsterdam (city where I would like to return always for numerous personal reasons)

Never again will I go to Koblevo (joke). Indeed, I have not found places that are to disappoint me completely. I often love visiting twice familiar places to indicate and compare different feelings. Even good village Koblevo is still luring me in spite of the fact that once I was not lucky enough to meet there proper service and comfort. The second house of mine could become Portugal. I can incessantly imagine myself sitting on the coast of ocean savoring beauty of nature and drinking port wine ‘Tawny’. The fulfilled fact that many friends from my childhood have got there worries me sometimes.

I recommend to everybody the beaches of Cyprus. It happened that I have not been to Egypt, yet once I visited Tunis, and it was a long time ago. What we require from the beaches is crystal-clear water and access to sun for twelve hours a day. Wherever you go, in Lemesos, Paphos, or Aiya Napa – these places are magically luring towards them while one should add as the supplementary bonus the wonderful local cuisine, breathtaking landscapes, and surrounding historical atmosphere. In my top-ranking among the best visited beaches ‘Coral Bay’ in Paphos is leading. By the way, at one of the travel web-sites I have read the marketing definition of Cyprus as ‘sturdy Mediterranean good place’ what I completely agree.

The most unusual dish I have ever tried was in Lithuania. It is called apple cheese. The taste simultaneously resembled cheese and marmalade. In general, afterwards it has been defined that Lithuanian cuisine is the closest for me despite the fact that it is not recommended to consume it a lot (however, nothing bad could happen after one or two times, could not it?) In the meantime, I have found the logical explanation to that as since 13 years old I have been a fan of ‘Led Zeppelin’, so, why I could not get crazy because of Lithuanian national dish ‘Zeppelins’ as well as other potato sweets?

I was most of all astonished by the mentality of Belgians, exactly the Flemish residing on the North. Certainly, among the variety of tourists it is not so easy to meet the native citizens, however, we paid attention to their calmness, sensibility, deliberation, and self-confidence in decision making as well as friendly attitude, sense of humor, and eternal positive). Further I am going to… well, I am not sure. I am planning to visit one of the musical festivals in Poland in the upcoming time. Generally, musical tourism is the best for me among the possible combinations.

Packed and Ready: Pavel Kazarin
"The routes that we choose hide our collective Freud, Jung and Fromm", Pavel's stories lead to deep thoughts about the true reasons for our desire to travel. A peremptory clever fellow of the morning show Ranok u Velykomy Misti/Morning in the Big City on the ICTV channel, a political columnist of integrity and simply the smart man Pavel Kazarin revealed to us the secrets of his travels and gave interesting advices to fresh tourists.

Packed and Ready: Yegor Gordeev
In our new column we talk to famous people who, despite their tight schedule, cannot imagine their life without travelling. Today in the spotlight: journalist and anchor at 1+1 Channel Yegor Gordeev.