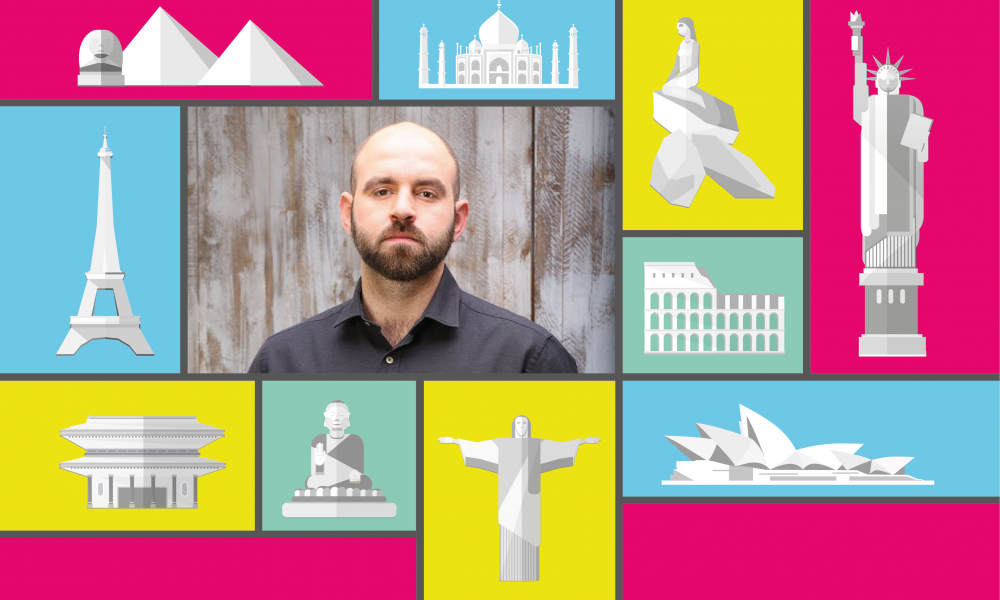 "The routes that we choose hide our collective Freud, Jung and Fromm", Pavel's stories lead to deep thoughts about the true reasons for our desire to travel. A peremptory clever fellow of the morning show Ranok u Velykomy Misti/Morning in the Big City on the ICTV channel, a political columnist of integrity and simply the smart man Pavel Kazarin revealed to us the secrets of his travels and gave interesting advices to fresh tourists.

My first abroad was Hungary.A two-week trip was after the entrance exams to the university. My friend and I lived in local families and from time to time we went to museums. I remember well our landlady - a nice woman who smoked three packs a day and was an unusually grateful listener. On our final day, she confessed to us that she understood almost nothing and was just nodding out of politeness. Three "must see places". Psychologists of the future will study the collective unconscious of our generation using the geography of our recreation. Precisely because choosing a ticket, we unconsciously give an answer to the question - from what exactly we are running away.

One cannot relax from nothing; you can only seek for getaway from things you are tired of. Therefore, the list of my recommendations will be very different.

Sometimes I feel like going to Istanbul. Metropolitan city with ever-noisy roads, where it is easy to feel the heartbeat of time. Another destination of choice is Prague, a city which builds its future on its past. About the same extent, in which the future of the Madame Tussaud museum is built on the past. I am not sure that I would be able to live there permanently - it's hard for me to imagine myself being a part of a punctually calculated tourist site, where you are part of the exposition.

I also like cities that are located far from the usual tourist routes. I remember the impression that Samarkand and Bukhara made on me. Another civilization, even the Soviet decades failed to invalidate it - original, offbeat and very unstable. Unstable, at least from the point of view of its future. One tries to visit destinations like these while they are still available. The situation of Damascus proves that sometimes such an opportunity disappears.

It is difficult to definitely name a country or a city that could become my second home.My first home is Simferopol. I still love this city. Yes, I know everything about it. I know that it is dirty, lurid, with absolute architectural eclecticism, but I have a sense of home in this city. Simferopol also has a monopoly on my childhood memories. Only three years ago, Kiev became my second home. We are still getting along pretty well.

Long time ago, when I came to a new city, I asked myself if I could live there. Then I realized that we bring with us the main baggage - ourselves. Now, when I come to a new city, I ask myself about another thing - where (and most importantly - from what) I would go on vacation after a year of living in that new city.

After all, our travels are a litmus test of everyday life. It is much easier to meet like-minded people than in the daily hustle and bustle of ordinary life. Probably something similar unites emigrants - they are united by something they ran away from...

Tasting of the most unusual dish I think is yet to come...I like to experiment with cuisines. Even if they start experimenting with me after the tasting. All in all, why not?

Basically, I think a big mistake is to state categorically upon arrival in another country that you do not like something. Because "like" or "dislike" are the categories available to the one who "understood". You first have to understand before you judge whether you like it or not

The mentality of each people is genuinely amazing. Finland is special for absence of thoughtless consumption: here phones are not changed just because they are out of fashion. Thailand is the country in which the most terrible for local residents is to "lose face." Georgia is a country of eccentricities and hospitality, where I first drank in the street with strangers "for an alien invasion, so that people of the whole earth would have something to be friends against it."

For the next six months in my plans is to drive by car along the Black Sea coast of Nikolaev and Odessa regions, spend a week in the Carpathians on the border of Lvov and Transcarpathian regions and castles of Volyn. I have several unclosed geographic Gestalts in Ukraine, and until I visited these places, I hardly decide to go abroad.

Packed and Ready: Yegor Gordeev
In thid column we talk to famous people who, despite their tight schedule, cannot imagine their life without travelling. Today in the spotlight: journalist and anchor at 1+1 Channel Yegor Gordeev.

Packed and Ready: Sergey Gulyuk
In our new column we talk to famous people who, despite their tight schedule, cannot imagine their life without travelling. Today in the spotlight: journalist and anchor at 112 Channel.