Puppetry: Another face of Prague 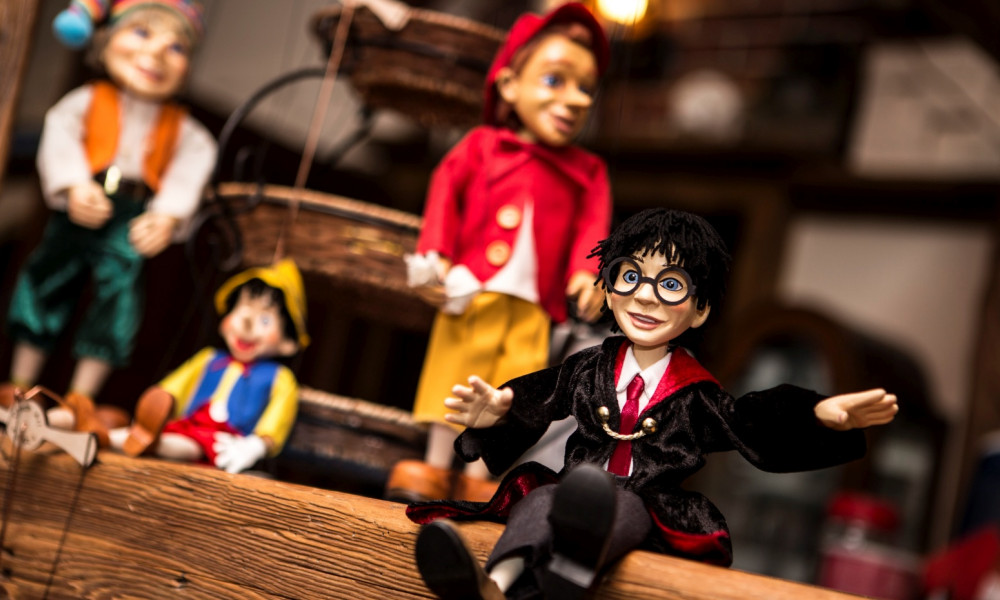 It is amazing how diverse history is! It is shining with golden domed churches and temples of Kievan Rus' era, tapping wooden klompen from Holland, rises heaven high along with ancient pyramids of Egypt. Yet, in Prague, the capital of the Czech Republic, history has a doll face.

If not in Prague, where else puppets could get a shelter? This city is lined with small dollhouses reminiscent of theatrical scenery well-designed by stage directors.

Marionettes arrived in the Czech Republic in the company of itinerant actors who usually performed on the market squares. Czechs gladly watched fanciful shows, and at the beginning of the 18th century they learned how to hand carve puppets which were not humble dummies, true gems of artistic craftsmanship. Now all the mysteries, the secrets and details of the creation and improvement are hidden in chests of Czech centuries long history.

Seemingly, it would be very easy to manufacture a doll from any available material: plaster, clay, wood, glass or textiles. But perhaps the most importantly is the soul of a master. Throughout many years, family dynasties of puppet artists emerged in Prague and other Czech cities. Puppets were often made from wood, the same as tree rings indicate its age, so generations of puppeteers superimposed and passed over their inherited secrets. The most famous in the Czech Republic family dynasty of Jan Kopecký, which originated in 1779 has been participating in theatrical performances to the present day. There are families that can boast with long doll making history: Jiři Trnka, Antonín Sucharda, Mikuláš Sychrovský, Václav Fink, Thomas Dubský. Carvers who worked on dolls, also fulfilled orders for creation of statues for temples, so many vintage dolls had Baroque features, and stages for the finest puppet shows were carved in the same style.

Families of puppeteers travelled from village to village and delighting fans with their amazing performances, sometimes biblical, sometimes extremely realistic. Yet, common people could not always express their opinion, and truth embedded in the mouth innocent doll, sounded very explicit,but no ruler would have dared fight with a puppet, not to expose himself to taunts. Inanimate creature voiced by its master is by voice took on human traits, emotions and qualities. Audience was well aware of main idea and empathized characters.

People used to buy faceless dolls, enhanced and dressed them to their taste, and arranged real home performances.

Since then, the Golden Prague has been preserving long rooted puppet tradition, smells and glare of bygone days. The glorious past was lovingly wrapped into modern fabrics and laces, retouched with fresh, bright colours and exposed to pull crowds of visitors into museums, shops, galleries and markets. Each art marionette has its own temper and charisma ranging from the earliest and best-known Spejbl and Hurvinek to modern cartoon characters. Come round to the ordinary shop to meet the President Obama or singer Michael Jackson, of course, a reduced size, drinking coffee while sitting on the windowsill. It is not surprising, that in 1991 the range of the local theatres was enriched by the National Marionette Theatre in Prague. Wooden human high puppets are great performers, and all began with a marionette named Spejbl donated to art teacher Josef Skupa back in 1920. Development of ancient traditions was much contributed by Jindřich Veselý who even acted as the chief editor of Puppeteer magazine. In addition to editing the publications, he and his associates arranged exhibitions and symposiums, which popularized exciting art of handmade dolls enthusiasts. At one of these exhibitions was even founded UNIMA (International Puppetry Organization). It happened back in 1929.

And this way, step by step, year by year, Prague entertainers approached neither more nor less but the third millennium. Nowadays, the puppet capital of the world even started its festival. Artists from many countries flock to the city to "see and be seen". Dolls gathered here do not look like a simple toy, but like exclusive artwork. Festival participants can have a good time and visit workshops, purchase materials, fabrics or accessories for work. These days in the Czech capital are surprisingly noisy and cheerful, full of childhood memories, dreams come true and fairy mood.

If you have an opportunity, visit Prague! Look into the eyes of each doll, search for your only one and take it home.Photo steemit.com

Karlovy Vary: stroll, drink, cure…
Even the famous Yessentuki can envy KarlovyVary resort town. Local water that rises from below the ground has long ago gained fame of a remedy from almost every disease. No wonder that every hotel acquired its own medical resort expert who will tell you what, where and how to drink. As to us, we will discover the story of this healthful location for you and tell you what and where to visit!