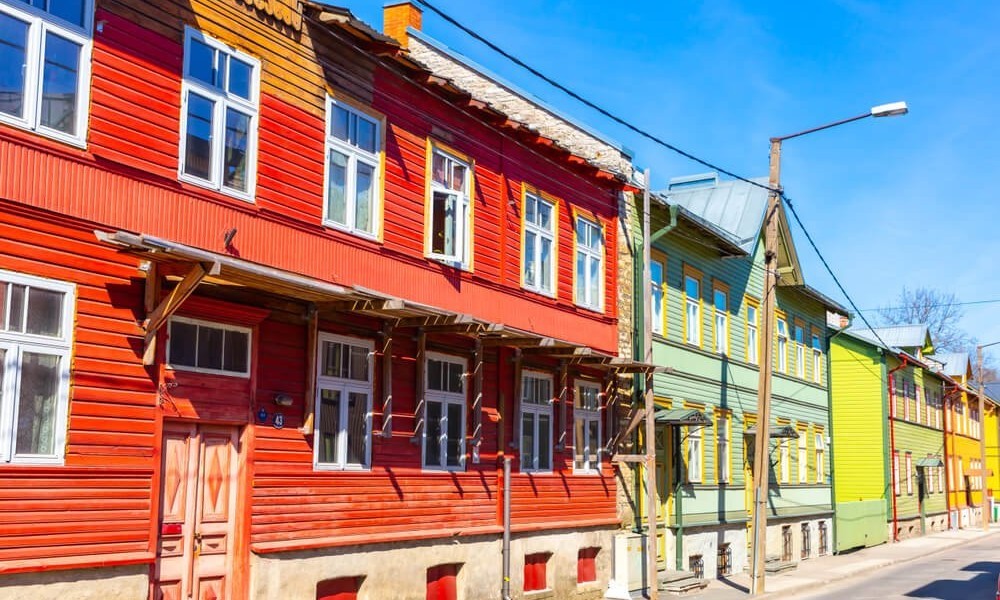 Quiet fishing villages are seething with whirlpools of ideas and brilliant minds. Tallinn bohemians revived to life the ancient seaside neighbourhood Kalamaja. Since the Middle Ages, the area was traditionally dominated by fishermen, fishmongers and boat wrights, and nowadays catchers of souls are flocking towards the place, twining variegated networks of studios...

... galleries, shops and cafes on the green streets running to the sea.

Light-hearted bohemian Kalamaja is a mirror of Old Tallinn, strictly lined by cells with impeccable Teutonic Ordnung. Need a break from a busy sightseeing schedule, crazy prices and hordes of tourists? Have a walk along the tram rails from the Fat Margaret tower to the Baltic station. Half an hour later, colourful hodgepodge of old fashioned, working class houses will peep in front of you, that is the most artistic district of the Estonian capital.

A small settlement on the banks of the fish harbour was first mentioned in chronicles of the magistrate in 1374. Apparently, the biting was good: the name of the neighbourhood means "Fish House". At first, the locals were selling their catch directly from their boats, and in the 15th century in Kalamaja opened the first fish market in the country. Glorious tradition revived in 2010 - every Saturday brisk fishers from the surrounding villages bring to Kalamaja pier their baskets full of cod, herring, salmon and eels, flavouring their catch with fresh stories and gossip.Photo toolbox.estonia.ee

At the end of the last century, factories and plants emitted smoke on the uninhabited coastal heathlands. Workers came to the village, at first they settled right on the docks, hiding from rain and wind under inverted barges. Soon room under boats was not enough, and the municipal authorities had to address the housing problem.

Low-rise houses were built for the proletariat on the order of the mayor Voldemar Lender at the beginning of the last century, defined the modern image of the area. The old building "lender type" is a simple log hut with basement and a stone staircase hidden in the wooden wall. Later, in the twenties, an improved project Tallinn house sprouted up there, they had two symmetrical wings, combined with fire-escape stairwell from the local limestone. In the basement there are workshops, mini-bakeries and cosy home cafes. Hearty meals are cooked with only freshest organic products, vegan menu ingredients are grown in the gardens right behind windows.

Historians consider Kalamaja as one of the earliest architectural legacy, although the buildings are not quite standard, on the facade there are bay windows and mezzanines. One such premises number 41 at Vabriku street was a home to Sergei Dovlatov, waiting for permission to travel abroad.

Cheap, old-school charm accommodation in a historic area with bohemian atmosphere made it the residence of choice for young artsy people and those with quaint creative mind. Abandoned industrial remnants of the Soviet era immediately found a new use, transformed into bohemian squats and open creative spaces, and local traditions of good-neighbourliness and mutual assistance formed a very favourable climate for creative start-ups.

The famous Telliskivi creative city gave a start in life to many famous designers, brought up a generation of conscious shoppers able to appreciate the uniqueness and subtle power of man-made products. Designer’s studios sale trendy jewellery, home furnishings and decor, clothes and handmade accessories. It is difficult to leave this place without purchase, luckily, prices are almost twice lower than in the Old Town, and souvenirs are made from environmentally friendly natural materials.

In between shopping sessions, visitors learn culinary traditions of the peoples of the world in the stylish lofts and tasting exclusive beers in the Pudel bar. In the evenings, the town of crafts lights up with neon shimmering of discos, and on Saturdays lovers of antiques delight souls at flea markets.

The former power station on the street Põhja was immortalized in the cult movie Stalker, it sheltered art-centre Creative Hub (Kultuurikatel in Estonian), organized to support contemporary artists. Boiler room with original equipment was transformed into a concert hall with an independent recording studio, and back rooms hosted workshops of arts and crafts. Outside the building picturesque alleys invite to PADA park, famous for vibrant festivals and morning yoga lessons

The most amazing fate, probably, befell Patarei prison, coming on Kalamaja from the east. Gun battery, built in 1840 replaced penitentiary in Toompea, burnt down by revolutionary sailors. After the dissolution of the colony, a grim monumental building acquired the status of a free museum. The maze of corridors of the prison serves as a playground for dizzying quests, and the retired head of the camp leads tours, proudly showing colourful graffiti on the walls and fantastic installations in the cells left by unknown artists.

North fortification pleases photographers by metaphysical landscapes of long forgotten industrial zone, smoothly merging with the park, situated on the site of an ancient cemetery. Seeking salvation from gloomy thoughts in eternal cycles of renewal of nature, landscape designers surrounded crosses and fragments of gravestones with spring flowers and fragrant grasses. This idea was successful - Kalamaja park is extremely popular all over Tallinn.

Eccentric space of creative ideas blurs the boundaries between business, art and leisure, claiming bright festive way of life, not knowing the alienation and boredom. Having rubbed through troubled times, vibrant mecca for bohemian souls Kalamaja looks to the future with hope, trying on laurels of Estonian Cadaqués. Perhaps, the new Salvador Dali is now wandering the winding streets in search of his muse.