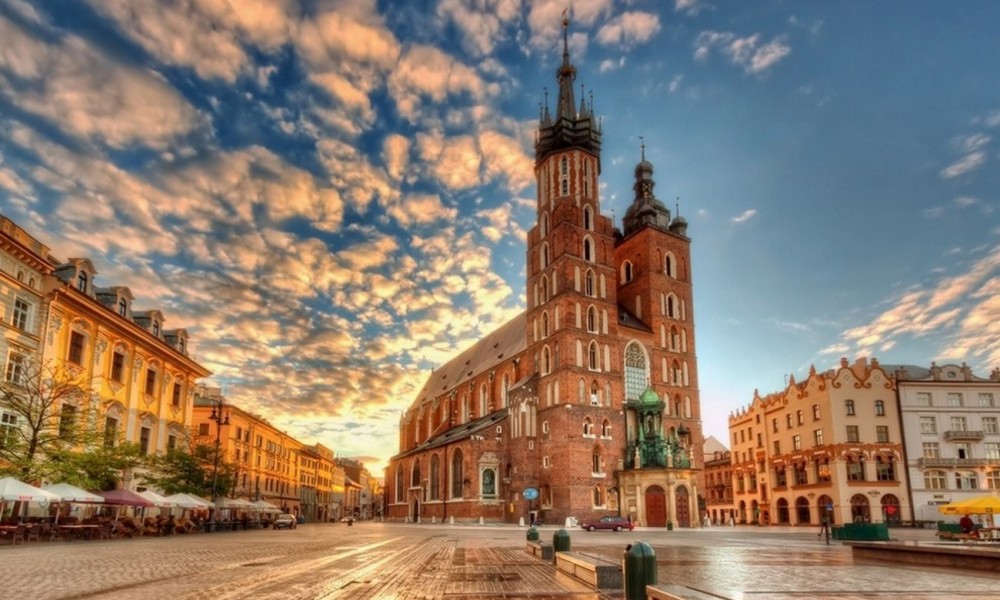 For Krakow we have only 48 hours, so we must hurry! Grab your breakfast that is local traditional fast food in the form of bread and lard, and run for getting acquainted with hundreds of works of art and dozens of legends teeming the city on the Vistula River banks.

In the morning, it is best to go to the heart of all ancient cities including Krakow, the first capital of Poland, – the market square which is one of the largest in Europe. And before crowds of tourists have "captured all the space", one can step on the first cobblestone road running through the area since the 13th century. Once those pebbles were trampled by feet of merchants and villagers rushing to the medieval shopping, and were patched by hooves of horses carrying goods to Middle Ages shopping arcades formerly known as "woolen". Now the stalls are lined with all sorts of handmade souvenirs and specialties of Polish cuisine. So, if after a sandwich with lard you are already hungry, it's time for lunch: take something famous like the white Krakow sausages with sauerkraut.

The next couple of hours shall be devoted to visiting the architectural complex with an impressive view – the Wawel with mammoth bones hanging near the entrance on the wall... No one knows who placed the remains of the historical animal there, but according to legend, they bring prosperity to the state. This spot is famous for Wawel Cathedral (the Royal Archcathedral Basilica of Saints Stanislaus and Wenceslaus), which is the final resting place for all the kings of the country.

Another attraction shrouded in terrible legends is a dragon cave. The three-headed monster that dwelt inside used to terrify all locals requiring to sacrifice for him the most beautiful girls in Krakow. Legend explains that when people began to inhabit the area, the city founder Prince Krakus first erected a huge castle on the hill. He had no idea that the most genuine mythical creature was dormant in one of the Wawel caves. Soon songs and melodies of herding horns woke the beast. From the sudden awakening, he began to rage and revenge for the alarm to all residents, taking first livestock, but becoming more bloodthirsty, he switched to people.

The fire-breathing dragon, as in any fairy tale, was defeated by cunning after he was forced to drink so much water that he exploded... Now everyone can wander fearlessly through the corridors of the cave. But the dragon, even in stone, is still there, although it can scare just kids and adults who are not aware of wonders of modern pyrotechnics: from time to time the sculpture noisily breathes fire out. And for those who are not willing to wait for the fiery exhalation, or who has only 48 hours and every minute counts, can send a paid SMS to a secret number that is known only to the locals and activate the service...

Later in the afternoon, when all those impressions tired you out, it's time to go souvenir shopping. You probably bought statuettes and magnets early in the morning, while walking through the market square, therefore we suggest browsing through numerous shops named "Amber". Their showcases are littered with all sorts of products from yellow-fire amber, this gemstone of organic origin is highly honoured in Poland, and it is believed that amber brings happiness.

Let’s leave travelling in Krakow vicinity for the second day. The "salt town" of Wieliczka stretches just half an hour drive from Krakow. There, on the 9th floor down, located caves completely made of the mineral with interiors made of the same. The total length of "self-created" grottoes is three hundred kilometres. Although just the smallest part of routs opens to the public, it is enough to occupy oneself for a half a day. Pacing the carved floor and looking at the sculptures carved from huge salt blocks, and simultaneously fighting the urge to lick them, you will heal your airways with fumes of sodium chloride.

Well, if your weekend falls on the first weekend of September, do not plan any excursions for the second day! You must attend the annual parade of dachshunds. Krakow was named the capital of dachshunds for mainly those long short-legged dogs are walking on leashes through the city. The very first representative of the breed arrived in the city at the beginning of the 19th century along with its owner the Bishop of Wroclaw. Noticing an extremely huge amount of dogs complementing city landscape, in the 70s of the latest century, locals came up with the festival. Dressed up in all sorts of costumes, pets come to the exhibition. There are butterfly dogs, "hot dogs", ballet dancers and Mexicans! The one dressed in sombrero and poncho won last year competition!