Amsterdam: Bike capital of the world 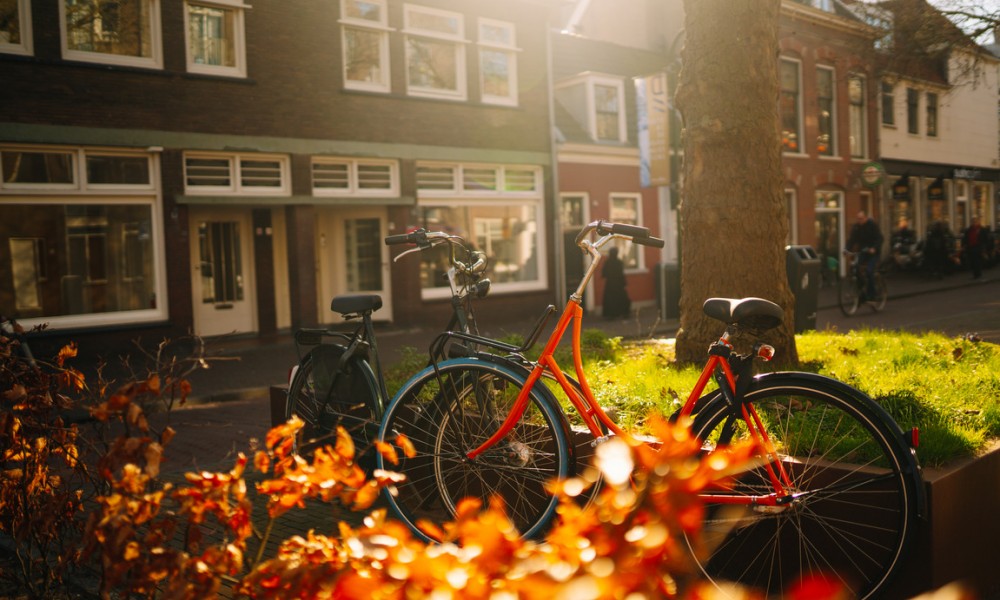 Telling about transport means which became a symbol of some city, it would be an amiss to forget about bikes in Amsterdam. Anyone who has ever been in the Dutch capital, will never forget neither countless cyclists hurrying in swarms through the streets, nor the magnificent infrastructure that contributed to a bike as a safe, environmentally friendly, healthy and the easiest mode of transport.

Another Part of Body

The Amsterdammers say that bikes have always been held in high esteem: at the end of the 20th century they were popular for mobility and freedom of movement. These qualities can hardly be overestimated in the city tensely riddled with canals and dams. A two-wheeler could move through area where a carriage was not able to drive, and tram rails or highway were expensive and difficult due to groundwater. Therefore, adults and children, rich and poor, men and women, almost all residents of the capital sought to get a two-wheeled friend.

Even the Nazis could not handle with this availability of "another part of body" for a long time. When, during the World War II, the occupants failed to restore order in the city, they decided to accuse ill-fated bikes riding which the Dutch easily concealed from the patrols, and, indeed, jumping into saddle they demonstrated that they felt free despite the occupation. The Germans did not come up with anything better than to withdraw bikes, dropping them into canals, and then melting them for metal or sending in trains to Germany. That stabbed the residents of Amsterdam to their hearts. Even today, many decades after the events, when the Dutch play football with the Germans, fans from the country of tulips bantering rivals, shout the famous chant "Bring back our bikes!" In the Netherlands bikes are respected more than trains, aircraft or even private cars.

Several years of occupation and severe bombing were not unnoticed for Amsterdam, as well as for the most of Western Europe. The World War II marked the country with countless scars, so the main Dutch city needed a serious renovation. The new master plan provided for demolition of many historic objects and, in fact, almost completely blocked the central part. Wide avenues, modern bridges, road junctions: in the 50-60s the capital was rapidly turning into a city of the future, where urban policymakers did not think much about pedestrians. This construction boom led to protests by different action groups. Amsterdam residents enjoyed biking, but roads became increasingly congested and dangerous, the number of traffic casualties rose to a high peak. Moreover, statistics shows that re-construction took the intolerable toll of child and teenager traffic deaths.
Photo ru.best-wallpaper.net

The Dutch economy began to boom in the post-war era, the capital was growing rapidly and the same its residents were gaining welfare: more and more people were able to afford cars, so two cars per one family was not a luxury, but rather usual thing. And who knows, if Amsterdam would have become the most bike-friendly capital city, but for the first oil crisis in the world in 1973. It hit Western Europe badly, the same year the Netherlands government urged Dutch citizens to adopt a new lifestyle and get serious about saving energy. As gasoline prices rocketed up suddenly, people began to get seemingly bygone bikes out of their closets and basements, but the rebuilt Amsterdam did not have enough space for them. In order to somehow reduce the number of accidents, the municipality began to pave bike paths and proclaimed a series of car-free Sundays. The initiative was positively accepted: in their days-off townspeople got back in the saddle riding their two-wheeled friends without fear of getting into traffic accident.

In the 70-80s resourceful and undaunted bikes enthusiasts began to form unions and associations and to demand more from the city: to consider those on two wheels as rightful participant in traffic, thereby it was necessary to develop an appropriate infrastructure. Architects made major changes in the master plan, they stopped restructuring of the centre; public utilities workers rolled up their sleeves and got to work arranging bike tracks as a part of urban highways. In several years, bike regained its living space, and preserved historic centre for future generations and tourists.

Eventually, high cost of gasoline and promotion of healthy lifestyle turned Amsterdam into the cycling nirvana of today. With about 600 thousand bikes, which equals the approximate number of inhabitants, the city is owned by cyclists. Therefore, if the city coat of arms changes its famous three crosses for a bike, no one will mind. Capital residents use their cars only for long trips outside the city, or if poor health does not allow to pedal, though there are many vigorous elderly people getting around on two wheels. For more than thirty years, great pains have been taken to accommodate cyclists: the city is equipped with an elaborate network of cycle paths and lanes, separate signs and lights for those on two wheels, convenient pavement borders, hundreds of bike parking stations – ride as much as you want!Photo thetimes.co.uk

Read also: History clatters on stone blocks of the Netherlands

Thanks to the circumstances and fierce activism of cyclists in the struggle for their rights and freedom, cycling has grown tremendously in popularity in other cities in the Netherlands - The Hague, Eindhoven, Rotterdam. Today, this successful experience is taken over by other countries. Therefore, even if tourists may think that the Amsterdam cyclists are dangerous guys creating chaos, in fact it is not a mess, but a well-controlled system living its own life. To verify this, you can simply check-up the statistics of accidents on the roads: in this respect Amsterdam is one of the safest cities in the world. We should not forget about ecology. Although the capital of the Netherlands is a very large industrial city with the port, the air is sufficiently clean, which is a pleasant fact. Cyclists rule in Amsterdam, a bike as a mandatory attribute of this city, its recognizable and all-positive symbol.

On average, every resident of the Netherlands pedals 853 kilometres per year.

Nowadays the Netherlands boast about 8 000 kilometres of high-quality cycle paths.

The city on two wheels supports a tradition to throw out unwanted or broken bikes into urban canals. When they are being cleaned, special cranes pick up tones of two-wheeled junk. Photo expatica.com

It is unlikely to see expensive bike there, although the Netherlands is one of the richest countries in the world. Most of bikes are very simple and inexpensive, since bike theft is still rampant in the city. Thus, Amsterdam residents do not see the point in spending big money on brand new bikes.

Every tourist should at least once visit bike markets of the capital. Waterlooplein Flea Market, Albert Cuyp Market and the "Black Market" on the street Oudezijds Achterburgwal are not just places of trade, but the real attractions, where non-mainstream visitors hang out, and one can buy vintage two-wheelers last ridden a century ago.

Departure: Volendam
Euphoria comes with freedom, masterpieces are in museums, and fantastic architecture is done by human and nature… Netherland capital Amsterdam is famous and unknown simultaneous. It might sound strange but Netherlands are not visible in this cosmopolitan and tolerant European city. So, we will try to search for it in the suburbs of the capital, particularly, in the village Volendam.

Departure: Rotterdam
Destined to be a port, Rotterdam became the most non-Dutch city of the country. It is the only city in the Netherlands headed by Muslim mayor, it is also a home for the largest Caribbean diaspora and even has its own China Town. Innate inhabitants and comers are almost equally numbered here. But if we look seven centuries back, we will see only a modest settlement on the Rotte River protected by dam from floods.

Departure: Amsterdam
If you spent half a day enjoying chips with mayonnaise, herring, eel and cheese; your imagination managed to find solutions for all the riddles of the universe while waiting for hours in endless queue to the Rijksmuseum; and within a couple of hours you were almost knocked down on the road thrice, it means, no doubt, you were spending that day in Amsterdam.