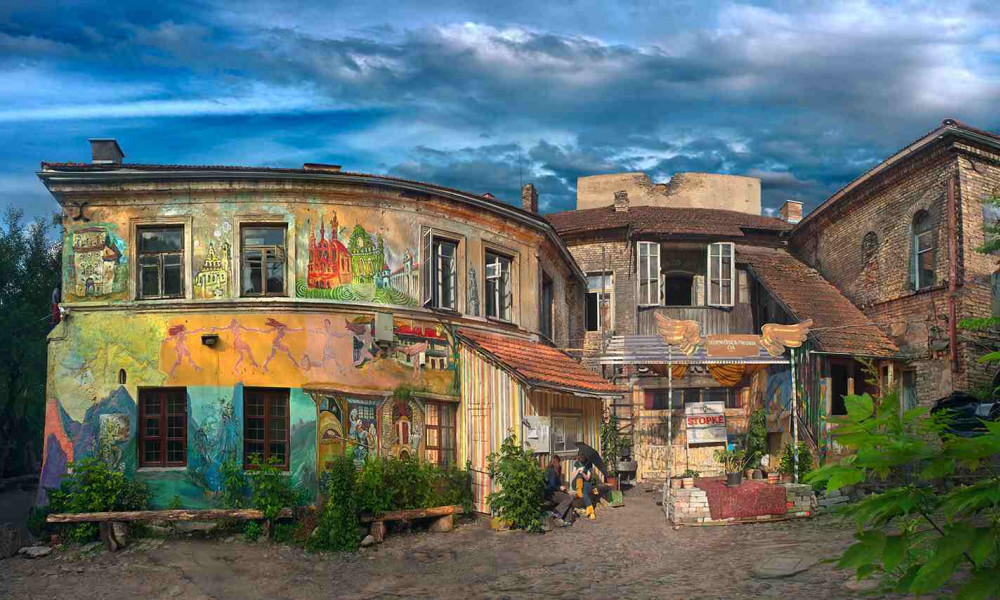 Užupis is the most famous neighbourhood in the Baltic States. And even in spite of small area, this Vilnius ghetto of freedom, harmony and creativity deserves its fame. We spent some wonderful days there, and would love to share our experiences.

A small neighbourhood separated from the Old Vilnius by the Vilnia River, is one of the oldest in the city, referred to in the historical sources of the 14th century. In earlier times, it was inhabited mostly by millers and craftsmen who built several bridges connecting Užupis with the city centre. And although the brook is very shallow, and bridges, neither earlier nor today were long or a specially designed, the residents of "the other side of the river" (that word "Užupis" means the Lithuanian language) did not hesitate to take duty for passage and people paid knowing harsh character of local guys. Any attempts to somehow reduce the price, or to argue, often ended in serious conflicts. Therefore, ever since, and until recently, the area "on the other side of the river" had the notoriety of being a rather tough district, and Vilnius residents tried to bypass it far away. Geographically it is isolated to this day: by water from one side, by the hills from another side, and the third side is an industrial zone, built during the communist era. Tourists, of course, were not taken there.

In the 90s of the last century, Užupis, like the rest of Lithuania, survived crisis. The reforms just begun, the economy was in decline, the industry stopped working. In search of a better life in the capital, workers of factories were leaving the frozen "the other side of the river". It was the time when creative young people from all over the Baltic States began to invade the city. Artists, musicians, actors, film directors and other strange bohemian people, as always, wanted to settle in the beautiful centre of Vilnius, which is even included in the UNESCO heritage list, but they did not have enough money to rent or purchase residential property. So, for quite mundane reason, they chose this tatty hive of stone and wooden cottages, which, as shown by signs, is located exactly 300 meters from the centre, and was full of half empty houses. That is how the area has received a revival of its spirit.

From the outskirts of the Republic

Creative individuals changed not only social structure of the district, but also its atmosphere. At their own expense, they reconstructed the buildings, some of which at that time were more than 500 years old, opened some fancy inns, organized street celebrations and festivals. Vilnius city authorities helped them every way, and in 1997 the municipality together with the residents, came up with a marketing trick which had to attract more foreign visitors both to the capital and its vibrant neighbourhood: they proclaimed Užupis as a republic, ushering in everything that goes along with becoming an sovereign nation: a president, until today the position is occupied by a famous Lithuanian poet and film director Romas Lileikis, the constitution, which is the most democratic and "hippie" in the world, and even the army consisting of 12 people. We can’t help mentioning about the fleet consisting of paper ships of local kids. Also, the Republic of Užupis has about 320 consulates around the world, honorary citizens including Dalai Lama, and even their own passports-tickets that are checked with tourists before a concerts, parades and other festivities arranged on Independence Day which is celebrated on April 1st. The symbols of Užupis are a statue of a trumpeting angel installed on the main square...

...and a bronze mermaid who greets guests at the bridge.

Despite the fact that the Republic is very young, the district beyond the river is abound in monuments since these lands have a rich history. Unfortunately, not everything survived to the present day: some magnificent mansions and temples have not been restored, but today Lithuania is making every effort to restore its most visited area. So, even though the territory is small, it is full of character and well worth the short stroll in amongst the mellow little streets and alleys. Turn a corner and discover tiny dreamy alleyways and backstreets brimming with graffiti. Luxurious and huge for the small city, now the Gonestov Palace is striking the visitors, previously it used to serve as a bakery, a hotel and a tavern. Today part of the space is given over to a supermarket, another part is residential premises.

Equally legendary building is St. Bartholomew Church, passed under the control of the Belarusian Catholics. Every Sunday services are held here in several languages. The temple was built in the 17th century.

The Bernardine Cemetery is one of the oldest necropolises in Lithuania, it is a burial place for the outstanding public and government officials, representatives of creative intellectuals. Nowadays, an active reconstruction of the cemetery is in progress, it was seriously destroyed during the Napoleonic wars.

Among the more modern facilities offering a taste of Lithuania’s thriving art scene, noteworthy is the Academy of Arts, various galleries and showrooms. Artists and designers occupy almost all the attics, basements and garages places, turning their studios into a mini-museums. Cult place is the Arts Incubator which offers new exhibitions every two weeks, it is special by the fact that almost all the exhibited works can be immediately bought. Thus, a tourist comes not to the dusty museum, but into alive market bustling with all-time movement.

Being far from the world of high art, one can be occupied with not less exciting activity: to have walk through local bars, which are clearly the best in the city as in Užupis they know how to have a real fun. The crowd-puller is the pub Šnekutis which brews its own beer and serves a delicious soup inside a bread as the first course, Cepelinai (potato dumplings with meat) for the second. There is a branch of this cosy inn in the centre, but as visitors say "That one is for tourists". Delicious coffee with dessert can be enjoyed in the Café at the Angel or the institution with the speaking name Kaif (Euphoria).

Eventually, despite all its trendy places and monuments, the main treasure of Užupis is still its atmosphere of freedom created by the locals. Only there you can see people in their pyjamas walking their dogs, or good-natured housewives who on Easter Monday take tables out to the river and invite all passers-by to share meals - so they celebrate the Day of White Tablecloths. Residents not just love their quirky district, they consider themselves as a part of it and together take the decision on its future, being the fictitious republic, but real community.

Sounds surprising, but it is absolutely true that even the mayor of Vilnius Artūras Zuokas, who lives in this bohemian quarter, walks unguarded and on equal ground with other residents equips the area at the weekends, or gulps a glass or two in the Šnekutis after a hard day. Complexes, if any, should be left on the other side the Vilnia River, since Užupis is a place to relax and be yourself, as stated by the local Constitution "Everyone is responsible for his freedom."