We have amber flowing through our veins, joke the Balts. They believe that a sunny stone comes from tear drops of their goddess Jūratė. According to legend, she was careless enough to fall in love with a mere mortal fisherman named Kastytis who day by day cast his nets to the Baltic Sea. Jūratė forgot that immortal ones are not allowed to enjoy simple human happiness, she fascinated the young man to the bottom of the sea into her amber castle, and there the couple in love lost count of days and nights. On hearing this, the lord of gods Perkūnas decided to punish them: bolt of lightening stroke mortal lover, and disobedient lady was chained within her precious possessions for all eternity. Since then, the grieving goddess cries dropping yellow tears, and waters of the Baltic carry them to the shore for others to enjoy.

Lithuanians cherish amber so much that they even created a museum in spa capital of Palanga, housed in the palace once owned by the family of Count Tyszkiewicz. Fifteen spacious rooms host nearly five thousand units collection. But this is only visible part of the precious mountain. Store rooms preserve about twenty thousand of various items made from amazing organic gemstone or containing it. 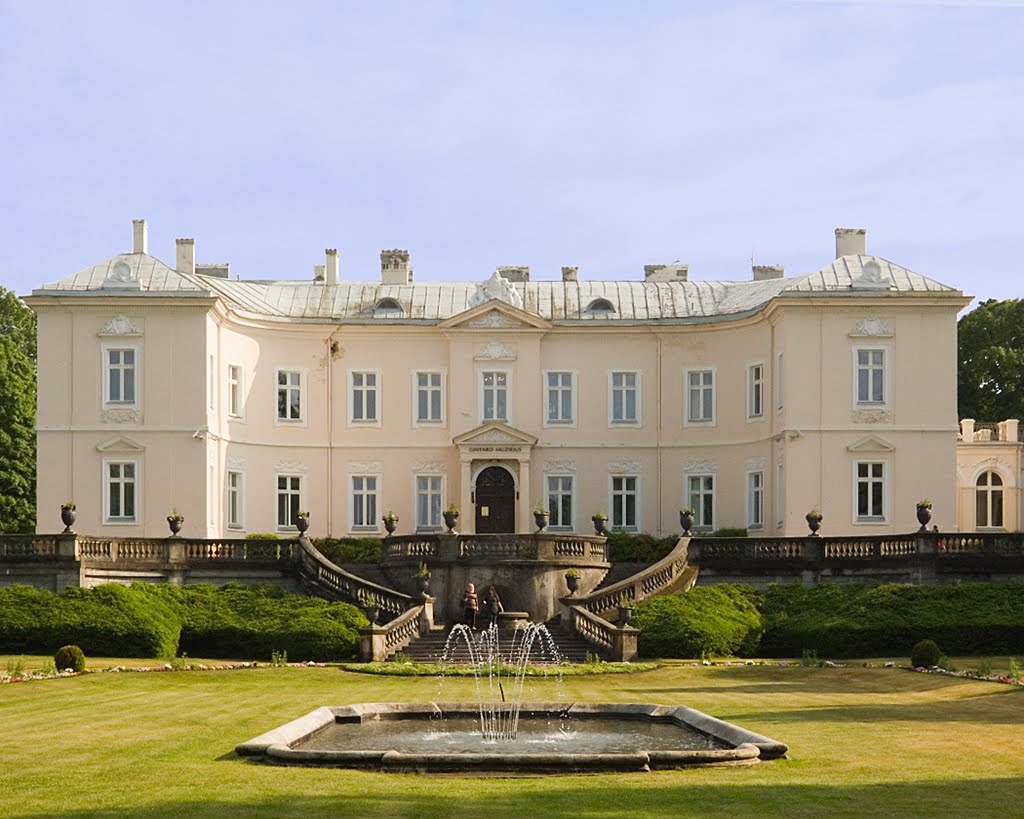 Pride of the collection is the Sun Stone. It weighs three and a half kilos. Criminals tried to steal it for several times, but to no avail, to the delight of the museum personnel. Many exhibits on display contain visible pieces of insects or plants. One may take a closer look of treasures through a magnifying glass, and the guide will tell you difference between real and fake amber. It turns out that nature-born stone can float in salty water, and burn if set on fire, uttering sweet pleasant smell. Imitations do not have same properties. The museum has a lot of items made from sunny stone or, as it is also called, honey stone: jewellery, household items, interior things, tableware, clocks, decorative panels, and even medicines made on the basis of this fossilized tree resin. Historians and archaeologists claim amber to be 100 million years old.

Bright stone has been venerated since ancient times. In ancient Rome it was believed that decoration can treat prostate and mental disorders. And surviving medical advice of XVII century says: Rinse made from sunny stone removes blockages in blood vessels. The Greeks rubbed it into dust and mixed with honey and rose water. This drug was used to cure eyes. Smoke from burning amber eased pain in heart and joints. Modern scholars believe that amber prevents haemolysis (destruction of red blood cells) and blood clotting disorders. The colour of this half-precious stone can vary from red to milky white. The richest deposits are located along coast of the Baltic Sea and in the Dominican Republic. Interest in amber is high in Ukraine. So, a few months ago at one of the local websites kilo and something heavy honey stone from Indonesia was sold at 16 thousand Hryvnias (1000 $). That amber was Brandy-beige colour and size of 20x15 cm, aged about 23 million years.

Blue amber is mined in Mexico, Nicaragua and Dominican. The first European to see this amazing stone was Christopher Columbus.

Baltic amber adorned the crown of Tutankhamun. It is mentioned as one of the first gems.

Transparent amber of cherry colour is particularly revered in Japan and China. This stone is worn by members of the imperial family.

The largest honey stone was found in Burma. It weighs more than 15 kilos. The unique finding is kept in London.

Michelangelo Antonioni: a Poet of the Desert of Human Soul
Complicated spiritual world of the people of the 20th century has become a fruitful topic for many cinematographers but a special place in its exploration belongs to Antonioni. The director has gained global fame with the movies that display inner world of his contemporaries, their loneliness and lack of social connections(the concept that has become crucial in the art of the master).

Where to go? Top five of the most interesting museums of modern art in Europe
Françoise Barbe-Gall teaches how to talk to children about art. She gives practical advices in her books, teaches to see things invisible to many people, to notice details and forget about labels. But we have to admit there are very few people who can boast with expertise in this area. If you want to change this order of things, today we offer you to go with us to the museums.

The magnificent world of land-art: Patrick Dougherti
Land-art is not simply the landscape design but also the whole direction in art which in thee 21-st century considered one of the most important when only lazy people do not speak about the ‘green technologies’ and environment. The names of stars of such an activity have sturdily come into the speech of the tutors, critics, and connoisseurs, especially they outline Patrick Dougherti.

Let's have a seat!
Walking along the Kyiv Landscape Alley, you always notice amazing benches created by Ukrainian masters. My favorite one is with a blanket and a pillow, because it seems comfortable even in inclement weather. Sitting on it, I remembered a picture from my childhood: the grandmothers take a long board out of the house, put it at one end on the stump, the other - on the railing of the entrance, and it turns out to be a bench. Wasn't it a design miracle?