In the Ar-Rahma Mosque the official iftar has happened 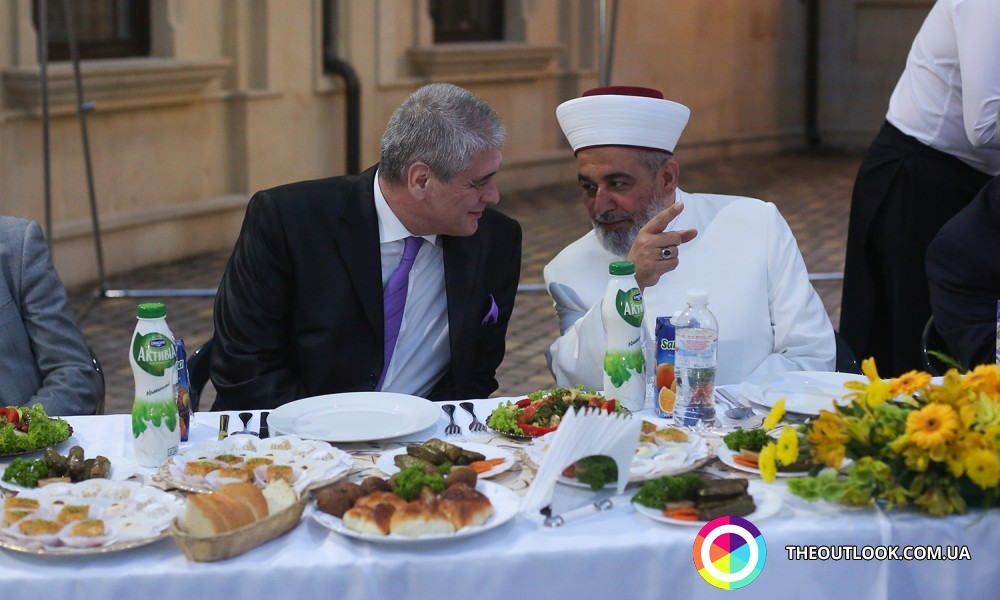 In Kyiv mosque Ar-Rahma the official iftar has happened, particularly, on the occasion of Ramadan month which is traditionally organized by the Spiritual Directorate of the Muslims of Ukraine so as to enhance relations of common ground and friendship among the representatives of different nationalities of Ukrainian society as well to acquaint diplomats and international organizations with the life of Muslims in Ukraine.

The event has been visited by the representatives of the public authorities, diplomatic service of Arabian, Muslim, and Western countries, the heads of expat communities and ethnic minorities, the representatives of different religious denominations, mass media, etc. The program was dubbed into Ukrainian and English languages what helped to diplomats and guests from international organizations to feel themselves comfortable.

The guests were welcomed with traditional dishes of Eastern cuisine and festive program including the reading of the Holy Quran, religious chants, and, of course, the performance of mufti of Ukraine sheikh Ahmed Tamim.

The ceremony of official iftar traditionally started after the evening Al Maghreb Namaz with the reading of Holy Quran. This honored mission has been implemented by hafiz from Algeria sheikh Ahmad Hansol.

In the evening there were a lot of congratulations directed to Ukrainian Muslims. The first speech was articulated by the special guest from leading international Islam organization Al-Azhap sheikh Ahmad Al-Abasiri. He congratulated all the visitors with the blissful month Ramadan and marked that activity of the Spiritual Directorate of the Muslims of Ukraine is highly estimated abroad, and the reputation of Sheikh Ahmed Tamim is unblemished.

Afterwards, there were speeches of the Head of Committee of the Verkhovna Rada of Ukraine on the questions of health care Olga Bogomolets, the Head of Kyiv regional state administration Maxim Melnichuk, the representative of Ministry of Defense Alexei Sergienko.

The president of Association of Ukrainian lawyers Vasiliy Kostitskiy also congratulated Muslims with this month special for believers and awarded the mufti of Ukraine the Sheikh Ahmed Tamim with the special gift and medal for significant heritage in establishment of spiritual and moral values, mercy, peace, and consent in Ukrainian society.

The Secretary of Council of National Safety and Defense of Ukraine Alexander Turchinov, Commander of National Guardia of Ukraine major general Yuriy Allerov, director of Department of culture of city state administration Diana Popova as well as various social communities expressed their congratulations to Ukrainian Muslims.

The mufti of Ukraine Sheikh Ahmed Tamim has spoken the final speech. He said words of gratitude for the congratulations with the beginning of the Holy month Ramadan and warm wishes; in his turn, he also expressed the desire of Muslims of Ukraine to work for the benefit of the entire multinational Ukrainian society for peace, prosperity and unity of our country. He also noted that the Muslims of Ukraine represent inevitable part of cosmopolitan and multi-cultural Ukrainian society and our state is the bridge between West and East. The representatives of different nations and cultures exist peacefully, and the guests drawing round the table is the direct confirmation. Ukraine is one and undivided! All of us have one purpose and dream to see Ukraine prosperous, progressive and healthy country where the value of citizen is defined according to his deeds and how much he has done for its development and happy future.

Celebration of Mawlid Takes Place at Ar-Rahma Mosque, Kyiv
Solemn event dedicated to one of the main Muslim holidays – birth of the Prophet Muhammad – took place in the capital of Ukraine in Ar-Rahma Mosque.

Official Iftar Takes Place in Kyiv
Official Iftar dedicated to the beginning of Ramadan, sacred month for Muslims all over the world, took place at Kiev Congregational Mosque Ar-Rahma.