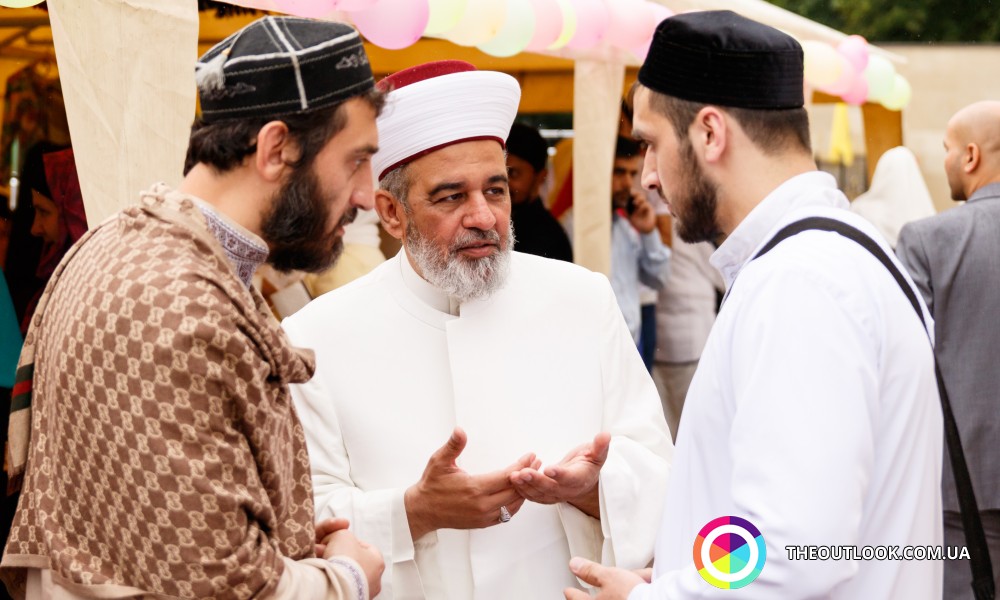 Today in Ukraine the Muslims celebrated holiday of the first meal after feast Eid al-Fitr (Oraza baýramy). The festive prayer happened in Kyiv cathedral mosque Ar-Rahma. This year there was a record number of those who decided to make holy namaz, particularly, more than three thousand Muslims.

During the ceremonial sermon the Mufti of Ukraine Sheikh Ahmet Tamim congratulated all the Muslims with the end of holy month Ramadan. He wished peace and prosperity to the multi-cultural nation of Ukraine. The guests of event accepted wishes from officials, diplomatic service, and the heads of foreign expat communities in Ukraine who attended the holiday.

To create holiday mood, in honor of Eid al-Fitr the Spiritual Directorate of Muslims of Ukraine also organized thematic fair within the territory of mosque where guests were able to purchase gifts for their relatives and close friends and watch festive concert.

These days Muslims are accustomed to visit relatives and friends, serve round with traditional dishes and present gifts, especially to children to make them feel all the joy from this enlightened day. That is why for the most little children there was a childish location organized to leave the warmest and positive recollections in their heart. As well, the kids could participate in questionnaire where they were able to get various prizes responding to the issues and be awarded with small pleasant souvenirs and bicycles.

After namaz the official reception happened when all the visitors could try tasty pilav and sweets.

In Kyiv May Revolution Day of Argentina was celebrated
The Embassy of Argentinean republic in Ukraine and personally Ambassador Extraordinary and Plenipotentiary Alberto Hose Alonso organized an official reception in Kyiv dedicated to the Nation Day or Day of memory of May Revolution.

Germany - A unique Christmas fair destination
Are you eager to have a great holiday to excite your aesthetic perception, smell and stomach? Are you looking forward to opportunities for shopping and entertainment, and at the same time learning Christmas traditions of another country? We encourage you to combine all those delights by visiting New Year fairs which are an integral part of celebration in most of Europe. Being strict in everyday life, but vibrant on holidays, Germany is an excellent holiday destination.

The ambassador of Tajikistan officially celebrated in Kyiv 25-the anniversary
In the capital of Ukraine the official celebration of 25-th anniversary of independence of Tajikistan happened. The holiday was organized by the embassy of Tajikistan in Ukraine and personally Ambassador Extraordinary and Plenipotentiary Mr Fayzulo Halboboev.

In the Ar-Rahma Mosque the official iftar has happened
In Kyiv mosque Ar-Rahma the official iftar has happened, particularly, on the occasion of Ramadan month which is traditionally organized by the Spiritual Directorate of the Muslims of Ukraine so as to enhance relations of common ground and friendship among the representatives of different nationalities of Ukrainian society as well to acquaint diplomats and international organizations with the life of Muslims in Ukraine.

Celebration of Mawlid Takes Place at Ar-Rahma Mosque, Kyiv
Solemn event dedicated to one of the main Muslim holidays – birth of the Prophet Muhammad – took place in the capital of Ukraine in Ar-Rahma Mosque.