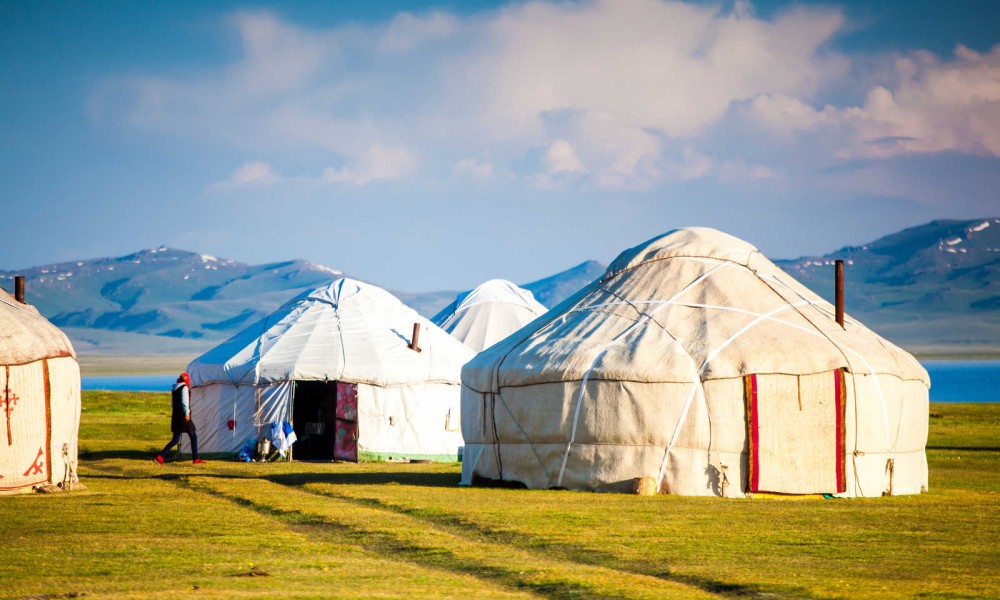 The great importance of a yurt for the Kyrgyz people is evident from their national flag: a round dome of a traditional home embraced by effulgent solar disc, proudly flaunts in a red background. Although usual life of nomads has been transformed to brick houses, a yurt still has an important place in their daily life, hiding under its tent echoes of history and carefully preserving old traditions.

The history of the ancient inhabitants of the majestic Tien Shan mountains is inextricably linked with the nomadic past. Thus, hot summer months they spent in green meadows with a lush carpet of alpine herbs, and with cold weather came, they descended into valleys, thus hiding from violent winds prevailing in the Celestial Mountains. Moving from place to place was an integral part of the pastoral nomads’ life that caused them to come up with a lightweight, compact, and at the same time very cosy dwelling.

After many years, an amazing national house has not lost its importance for the modern inhabitants of Kyrgyzstan. Side by side with ordinary residential buildings, a yurt is a resting place on summer day, shelter from obsessive heat for the whole family, as well as a tribute to the traditions of the ancestors when hosting celebrations of national holidays, or blessing newlyweds for happy family life.

Since olden times, to move a yurt from one place to another, they needed power of several pairs of horses, and its uncomplicated installation was undertaken almost always by women only. Nowadays, Kyrgyz mobile residence is often used as a home for shepherds, looking after cattle on lush mountain grasses. It is built and assembled pretty quickly, that made this construction, familiar even in the days of ancient nomads, an incredibly comfortable housing option for all occasions. The top layer of a yurt is so durable, that is able to hide the hapless shepherd from icy coldness of mountain ranges or autumn long rain piercing everything with cold heavy drops. House of nomadic people protects its residents from the nasty weather, and allows to accommodate comfortably the whole family and visitors within its walls.

Each phase of a yurt creation, starting from installation of frame and finishing with interior decoration, has steadfast rules, because for the Kyrgyz this house covered with dome is their own little universe. According to the custom set by ancestors, living space was divided into several zones: a privileged place, located opposite entrance, has long been called "tor" and meant for elders and honoured guests; left side, or "er jak" was allocated to the use of young men; the right part called "epchi jak" was inhabited by women, and it was a place for a baby cradle. The rest area next to entrance "ulaga" was used for storage of household utensils. The zoning of the premises provided for hearth-and-home in the true sense of the word: in the middle of the tent indigenous people arranged a fire place, so-called "kolomto", where the lords' wives cooked dinner. Wealthy Kyrgyz had separate yurts for kitchen and food storage, and another tent they put on the occasion of some noisy celebrations or rituals involving crowds. When a Kyrgyz married his daughter off, he did not skimp on the wedding yurt, which was considered the main jewel in the treasure box of a bride's dowry.

Before installing a frame and pulling on a tent, the future owner of the home addressed one of the elders of large family, who was asked to carry out a traditional rite of passage - a raising of a yurt rim, thereby wishing prosperity and health to residents in the new house. At the end of the traditional ceremony, the distinguished old man received as a gift a new white shirt and a sash, and then a lady set her foot on the threshold. Her task was to "feed the fire" by pouring milk on it and thus attracting wealth to the abode.

As a "skeleton" of a yurt, they always used wooden frames, made mainly from willow or spruce. Floor for a house was made of transportable latticework panels bonded by durable straps made of leather of horned animals or camels. That is the number of such lattices that could show estimated size of the planned building. Straps for fastening, holding the entire structure together, were usually decorated with fanciful ornaments with national symbols, making them one of the most visible details of the decor. Entrance doors, just one and a half meters high, were necessarily decorated with mystical patterns, which protected the family from evil spirits and attracted good luck into the house. Among the figures, most often were ram horns, family tree and sockets with one-sided curved arcs. Dome of a yurt is a separate art: a wheel-shaped rim "tyunduk" performed the role of the chimney and window in the roof, roof poles radiating from a central wheel led to lattices on the floor. At the final stage, the construction got dressed in bright felt capes.

Each detail of a yurt in ancient times was tied to its symbolic character. Thus, the square lattices were identified with the native land; bearing poles were a symbol of ascent of the spirit; and a chimney was nothing but the sun. It was believed that it served as access to other worlds, where wise shamans went to learn essence of the universe. Sacred fireplace in the centre of a nomadic dwelling, which was traditionally set before erecting a yurt, symbolized eternal connection of the future with the present and the past.

If we talk about the Kyrgyz yurt as a construction, it is quite similar to the buildings of other unsettled peoples, but interior and furniture shows character of the house owner and national features. Portable homes of the Kyrgyz are famous for their decor strewn with whimsical patterns inspired by nature. Despite amazing diversity, interior details clearly correspond to the traditional canons. The female half of a yurt necessarily had a screen separating household accessories. The left side of the home, designed for men, contained equipment for hunting, crafts and horse harness. In the centre of a yurt they equated a storage for woman's headdress "eleçek" on the right, and a silver pole with thread, on which hung men's rich fur coats, on the left.

Traditions, associated with a yurt, have long existed not only within its thin walls, but also behind a threshold of Kyrgyz homes. A horse rider had to come to a nomad’s home from the back side. Leaving his weapon and shoes at the door, he had to come in and taste the dishes, refusal to share bread with a lord of a yurt was considered tantamount to an insult. Located conveniently near the hearth, all the inhabitants and visitors with sinking hearts, got ready to listen to the stories told by elderly about brave heroes, famous battles and beautiful region guarded by a great ridge of the Tien Shan.

To fish countries out. Best places to do so
Today millions if not billions of males and even females around the globe observe the World Fisheries Day. On this occasion we offer you a top list of ultimate fishing destinations where you can feel a nibble at the bait. Brazil, Vietnam, Kyrgyzstan, Finland - there is something in every country to surprise every professional or novice fisherman. So pull while they bite!

The Embassy of Kyrgyzstan to Ukraine organized literal visual evening of Chingiz Aitmatov
Especially for the anniversary date of the Embassy of the Kyrgyz Republic organized a reception in honor of classic literature and well organized presentation of "Manas" Kyrgyz national epic. In 2018 marks the 90th anniversary of the classic and the 10 years since then as the author is not, in this regard, in Kyrgyzstan and a number of friendly countries at the national level, there is his birthday.