On the catwalk: Kyrgyzstan 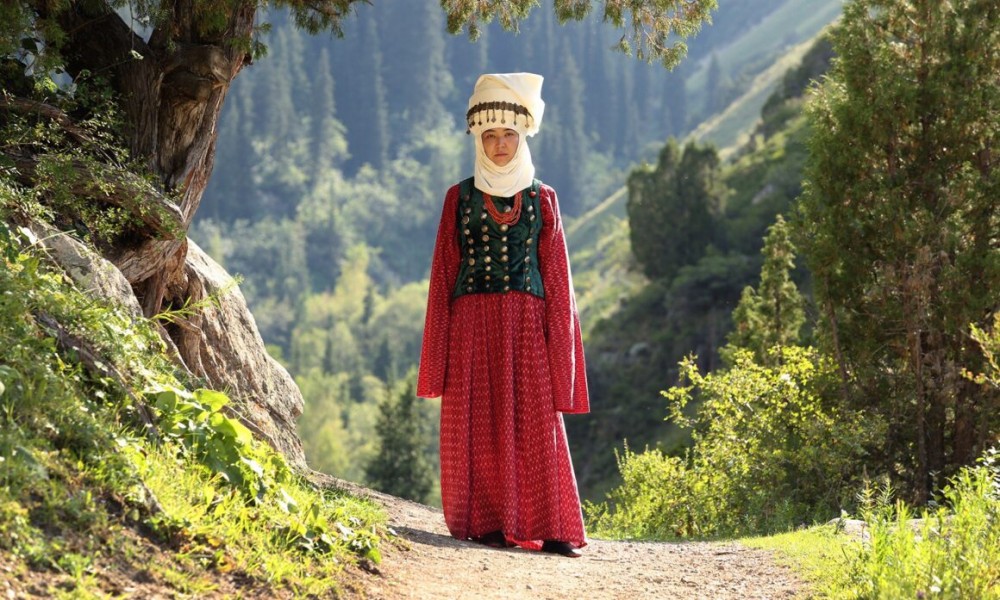 Traditional clothes of any nation is important part of material and spiritual culture, closely linked with history and personality traits, as well as with lifestyle. Today, the focus of our attention is on national costume of Kyrgyzstan natives. All its clothes are beautiful, colorful and, most importantly, comfortable. What does it combine in itself, how is it worn and are there any distinctive features read on!

Attending a public festival, or travelling somewhere in the hinterland of Kyrgyzstan, you cannot help paying attention to the national costumes which are beautiful, colourful and, most importantly thing, they are comfortable. The traditional clothing in Kyrgyzstan was much dependent upon the nomadic life style of the Kyrgyz people and the harsh weather conditions: a relatively small area of the country has several climate zones, featuring both boiling heat and freezing cold. Moreover, temperatures could change dramatically during the course of the day: it is enough to climb mountains or go down from there. To be engaged in cattle breeding, trade on the highways of the Great Silk Road and overcome long distances horseback, it was necessary to have strong health, and wear clothes that did not hinder movement whether riding or tending the animal livestock.Photo lonelyplanet.сom

It was made from both materials that were at hand, like wool of sheep and camels, and from finer fabrics such as cotton, velvet and silk, sometimes imported from neighbouring countries. Garments used to indicate social status: coarse homespun cloth showed a poor person, if an outfit was soft to touch, and the fabric shimmered nice in the sunlight, and was decorated with delicate silver or gold ornaments, it was obvious that a vis-a-vis was a man of means. However, both rich and poor Kyrgyzstan inhabitants wore their clothes as long as possible, wearing them out till holes, till clothes fell apart, because they treated their outfits with respect, carefully giving them out to close relatives after the death of the owner.
Photo kalpak-travel.com

Now let us dwell in more detail about the men's and women's traditional garments. Representatives of the stronger sex were much engaged into heavy physical labour. As the basis of their attire, men used a kementay, a wide felt robe belted at the waist. It protected well from rain and bitter steppe winds. The nobles and wealthy Kyrgyz had white kementays. Another item is a zhalgak shim, wide trousers made of leather or suede, decorated silk embroidery, and boots with narrow, slightly turned-up noses called an otuk. The most visible feature of traditional Kyrgyz clothing as worn by men is the distinctive white hat, the kalpak, a brim of which one could turn up and down depending on the brightness of the sun. For its production they used either a velvet or satin. In the cold season kalpak was replaced by tebetey made from fox or lamb fur. In ancient times, when a messenger was sent somewhere with an important message, he was given the sender’s tebetey as a pass.

This headpiece is popular to this day, and is honoured much by the Kyrgyz people. Rulers crowned their heads with it as a symbol of Khanate, a tebetey was used during enthronement ceremony. Another integral part of the male costume is a long and wide shirt made of a velvet, a chapan. Today, these shirts are likely to be seen on older men. In snowy weather shepherds and nomads did not leave their homes without a ton, warm sheepskin coat.

As for women's clothing, its essential piece is the famous loose skirt beldemchi. It was usually fastened to a wide belt. Festive version was different from the everyday by patterned embroidery and fur hem. Most often embroidered and decorated beldemchi was given to a girl by her mother as dowry, or as a gift to celebrate the birth of the first child. The skirt was worn over a kemsal, underwear dresses, good for both winter and summer. Another obligatory component of the Kyrgyz traditional female image is a cap, on top of which is attached a big white head-dresses called an elechek. The first time it was commonly worn when a young wife went to live into the house of her husband.Photo lonelyplanet.соm

As a farewell, family wished her to have a long and happy married life: Let white elechek never fall of your head. It was not accepted to go out without a headpiece. Single ladies put on tebetei with feathers instead of cap. Winter clothing is impossible to imagine without a fur coat an ichek and boots on a wooden heel. Kyrgyz women put on jewellery and accessories not for beauty, but as amulets, so this country have never had ladies with shining neck chains. Nevertheless, everyone admired looking at buttons and collars of female clothes trimmed with precious stones and metal beautification pieces, they look like work of art.
Photo journalofnomads.com

In general, if we talk about the national costume of Kyrgyzstan, in the 20th century the trend of traditional clothing was rapidly replaced with western style dressing, so now all this beauty can be seen either on few festive occasions or in remote villages and small towns, where older people adhere to strict traditions. Hats appeared to be the most long-playing item, that is much worn by men and women. It is not a custom to leave your hat anywhere, to share it, and quite a bad sign is to lose it somewhere. No wonder they say that "it is better to forget your head, than your tebetey", a symbol of wisdom and maturity.