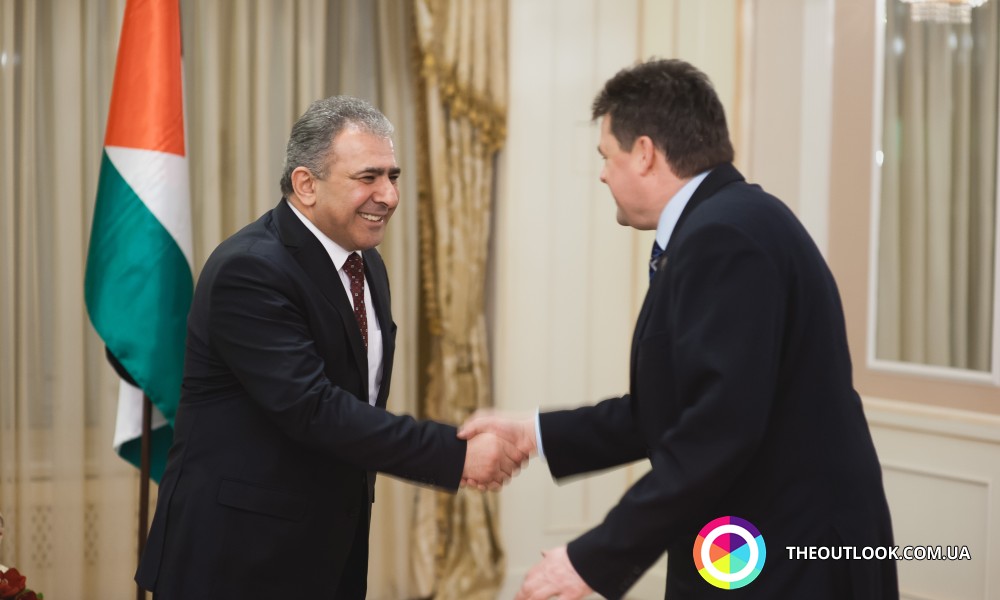 In Kyiv the official reception dedicated to the National Day of Palestine happened organized by the embassy of this state to Ukraine and personally Ambassador Extraordinary and Plenipotentiary Mohammed Al Asaad.

Starting the event, Mr Ambassador greeted all the guests and remarked that Palestine highly appreciates the common efforts of both our countries in the development of bilateral relations, the last of which were political consultations, the visit of Minister of agriculture of Palestine, and attendance of Palestinian art teams taking part in the arrangement of Palestine Culture Day in Ukraine.

‘We wish to Ukraine safety, stability, benevolence, prosperity, and unity of its territories. Let me express the gratitude to Ukraine which has always been staying near the Palestinian nation. Let me one more time congratulate and gratify you for the presence at this holiday which gives you hope for the prospective future’, the Ambassador acclaimed.

Mr Asaad shared success of Palestine state with the guests as well: ‘Today we accept the legislative acts which help to encourage the investments and create strategic companies where Palestinian investment fund collaborate with the international and Palestinian investors. The most important sectors which we develop for increase of production are agriculture, energetic, renewable energy sources, natural resources, telecommunications, information technologies, infrastructure, transport, growth of real estate sector as well as tourism’.

As Mr Al Asaad said, they succeeded in launch of manufacturing districts in the cities Jericho and Bethlehem, one more manufacturing zone in Junín under the auspices of Germany and Turkey. Moreover, they are continuing work over development and expansion of manufacturing city Gaza under the support of European Union. For the expansion of opportunities of young people the foundation of the first technological park in Palestine was put under the support of government of India in university Birzeitu, now the work is going along with the authorities of South Korea.

Look at our gallery how the event was going:

The Ambassador of Palestine organized reception in honor of International day of solidarity with Palestinian nation
In the capital of Ukraine the diplomatic reception organized by the Embassy of Palestine to Ukraine was organized. It was coincided to one of the most important national holidays in this country.

VIDEO: OUTLOOK WORLD CULTURE FESTIVAL
We are infinitely grateful to all of you - our guests - for sharing this holiday with us! We express special gratitude to all embassies-participants, diasporas, artists, craftsmen, volunteers. Without you, this holiday would not be so bright and memorable. Today we offer you a colorful video that will take you back to the atmosphere of our unforgettable holiday.

The fourth meeting of graduates from International Relations Institute in Kyiv
On the 16-th of September it was a great event that united graduates and tutors with the love to the high educational establishment and warm recollections on the time spent together.

"TO BE HOME IS TO FEEL SECURE". Memory of Yasser Arafat Honored in Kyiv
“To be home is to feel secured…” – these words belong to the founder and first head of Palestinian National Authority, fighter for freedom of Palestine, Nobel Prize winner Yasser Arafat. On November 11 Palestinian leader’s commemoration evening was held in Kyiv orchestrated by Embassy of Palestine in Ukraine and Palestinian expatriates.

VIDEO: Here live the Samaritans
In early 20th century one of the least numerous peoples of the planet – The Samaritans – found itself on the verge of extinction. Back then all efforts were hurled into saving the ethnos and as of today it was managed to increase their number from 146 to 750 persons. This ethnical group resides in Israel not far from Tel Aviv as well as in Palestine in Kiryat Luza village nearby Mount Gerizim that is sacred for them.