Youtube
Статьи  >  Enjoy  >  This is not a May Day demonstration

This is not a May Day demonstration 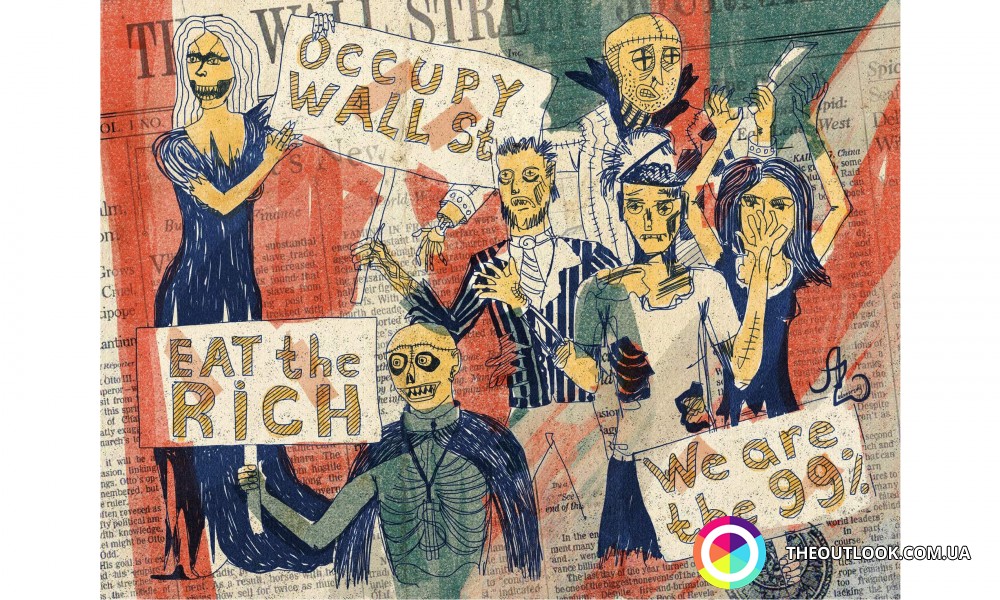 Instead of curses and insults - kissing; instead of loud slogans - people dressed like semi-finished food; instead of declarations - body-art. OUTLOOK is revealing the most creative protests.

On July 10, 1040 a fair Briton native Lady Godiva rode on horseback in altogether through the city of Coventry. Such escapade was undertaken by a young lady as a sure-fire way to make her husband Earl Leofric reduce excessively high taxes for their citizens... Yet, folklore will be folklore, even in England, there are no official documents to confirm the dedication of the woman, but the fact that her husband was buried in the local monastery almost as a saint, and citizens adored him, is a true fact reflected in manuscripts. In Russia, as we know, there are two misfortunes: fools and roads. Very often, these troubles get in contact that leads to tragedies. To grab at least some attention to the perennial problem, artists of Yekaterinburg came together and created a series of graffiti with local officials as main characters. This head-turning campaign appeared to be efficient: utility services providers erased the cartoons quickly, along with that they mended holes.

We are moving towards a liberal and democratic West, where someone is protesting against something every day. Especially radical are European vegetarians who stop at nothing just to put their point forward and convince others give up eating meat. Though not everyone likes such a defiant expression of the position, the London fashion for "packing people into semi-finished products" gained momentum and spread to the United States and Spain. The idea was born in the minds of PETA activists.

In the Old World they are worried about global warming. Confirmation of this is a protest-photoset on a glacier in Switzerland organized by the Greenpeace in 2007. More than a hundred people stripped naked in front of the lens of the photographer Spencer Tunick to address the issue of melting Alpine peaks.

In the 21st century people are ready to protest against the social networks. The daughter of Bruce Willis Scout vehemently disagrees with the Instagram regulation that prohibits publishing sexually explicit photos. After one of her pictures had been deleted for these reasons, the girl walked topless through the streets of New York, dropping on her way into grocery and flower shops.

Brazilians have been often holding mass-meetings recent years. Mostly they parade around against the excess spending on the organization of the World Cup and the Olympics, but sometimes there are other sparkles for protests. For instance, at the beginning of 2014 hundreds of people came to the Rio beaches and set there cosily not in lounge chairs, but... on toilets. Thus, residents expressed their concern that more than 70% of wastewater with a huge amount of bacteria without any cleaning drains directly into the ocean. The main concept of civil society in the United States is "we are not zombies." Three years ago, a few dozen of "dead" first held in New York a march "Occupy Wall Street" to drew criticism to financial tycoons who are not always infallible, to remind that their activities are supervised by the public and they will be responsible for any fraud.

Economic issues are also trouble for the Chileans, especially the younger generation, which decided to combine business with pleasure. On September 1, 2011, the World Day of Knowledge, the students flocked to the centre of Santiago, not just to kiss enough, but also to express their disagreement with the high prices of education. The massive demonstration of feelings was a major element of protest, a concept of which can be stated as "Love is freedom, education is not." The protesters succeeded in bringing about the desired changes: the concerned authorities made education more available by reducing interest rates on loans for young people from six to two percent.

Chinese artist and dissident Liu Bo Lin cannot boast with such large-scale results for now, yet, many people consider his protest creativity as a masterpiece. After his workshop had been closed in 2005 due to censorship, the maestro switched to an unusual type of painting and became "a human chameleon". Using his own body instead of canvas, and merging with the surrounding world, the man proclaims that in China there is no space for liberal artists.