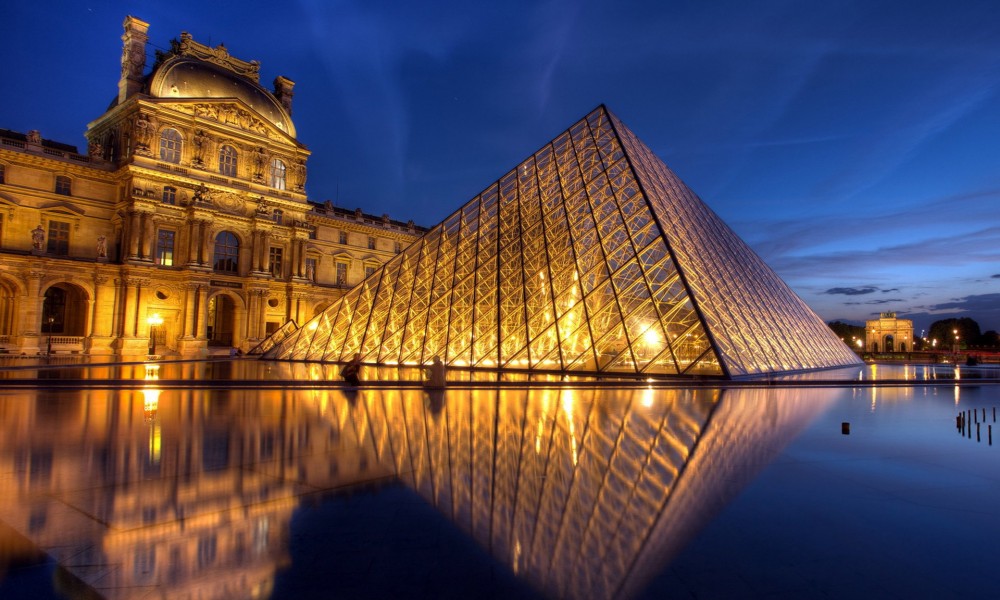 First exhibition of paintings in the world’s most visited museum the Louvre was opened on 1793. But its building was well-known far beyond France, though the edifice was not used with such lofty cultural purposes.

Built in the 12th century, the Louvre used to serve as a fortress, a residential palace and housed art exhibitions of the Académie des Inscriptions et Belles-Lettres. Fortunately, now there is no need to use famous French landmark as defensive construction. Long ago it became a must-visit point on the map of any fine art lover. Though today we are not going to explore the collection hosted by the Palace, but refer to facts owing to which the museum enjoys its wide popularity. Just imagine: last year a new attendance record was set – almost 9 million people!

The Grande Galerie of the Louvre is the hugest interior corridor in the world. Previously on rainy days the French monarchs stuffed tunnel with rocks and trees, let animals in and... hunt began. Being the exhibition gallery, the corridor is sometimes used by moviemakers. For instance, the lead characters of Bertolucci’s The Dreamers are running through it. In the 18th century the Louvre got into hard times when nobles moved to Versailles, and the fortress dominating the heart of Paris sank into oblivion. The abandoned edifice remained empty and was falling into ruins as much as 50 years. Everything changed after Napoleon Bonaparte came to power. The Emperor arranged completion and restoration of the building and its objects. As a result, the Louvre changed its name: in the Emperor’s time the fortress was called the Musée Napoléon.

Most rulers seek to modify important historical sites. And, as a rule, their attempts fail. But not in the Louvre case. Many French leaders tried to bring something new to the look of the famous fortress. Construction of the glass pyramid at the entrance was the latest architectural contribution. It appeared quite recently, less than 30 years ago when François Mitterrand was in power. At first glance a copy of the Egyptian star attraction seems to be fairly easy. In fact glass building weighs about 180 tons and has a considerable height of 22 meters.

And some more words about the pyramid. It is surrounded by numerous legends and riddles, although it is only a bit more than 20 years old. Most often it is associated with name of Satan: as the rumour says, the glass panes in the Louvre pyramid number exactly 666, so it was built by the beast. But those particularly superstitious or impressionable shall not worry. One can safely go on a trip since the official number of the panes, fortunately, is 673.

The United Arab Emirates decided not to wait for having the hall devoted to their culture. The sheikhs built a branch of the Louvre in Abu Dhabi. The most exciting thing is that in 2007 they paid 400 million EUR for franchise. So, now without any remorse, the Arabs have their own Louvre.

At the end of 2011 the French art experts raised a scandal: they accused the British company which restored Leonardo da Vinci's The Virgin and Child with St. Anne. Art critics claimed that after the restoration the canvas looked too bright. The British reasonably responded that they did everything exactly according to the information that survived since Leonardo’s time.

During the Second World War, the most famous masterpieces of the Louvre were removed from the Louvre and taken safely to French village. Surely, the Mona Lisa survived the longest journey. During the war this painting has changed as much as 5 addresses. Just see what conspiracy can do!

In addition to the secrets and mysteries of the Mona Lisa, tourists are fond of many Louvre legends. The most popular one is about the ghost of an ancient Egyptian whose mummy was brought to the museum in the early 20th century. The ghost was nicknamed Belphégor (the name of archdemon). The spirit walks at night through the Louvre and hails terrible curses on anyone he meets.


If you do decide to visit the Louvre, and no mysteries and legends frighten you, well, that's great. And while someone may think of the museum as the cheesiest place of Paris, you can be sure of one thing: everyone can find something interesting there. Well, as a last resort, you can always take a picture of the Mona Lisa with your mobile phone and then say confidently And I saw it too!