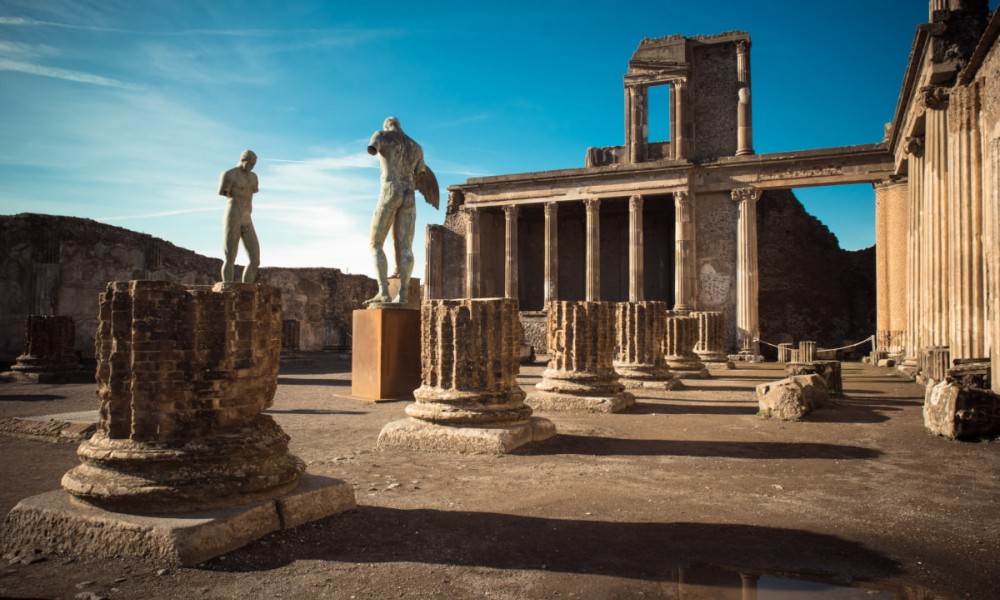 Human history remembers Dresden, Hiroshima, Nagasaki. The list goes on and it includes Pompeii where residents turned into stoned monuments against their will. Located near modern Naples, the city with views of Mount Vesuvius was one of the most developed cities not only in the Roman Empire, but also in Europe. Once thriving community it flourished in many spheres: painting...

Located near modern Naples, the city with views of Mount Vesuvius was one of the most developed cities not only in the Roman Empire, but also in Europe. Once thriving community it flourished in many spheres: painting: art experts believe Pompeian sculpture and mosaics can compete with works created by Renaissance artists; economy: a trade route to Southern Italy ran through Pompeii; science: there was found a sundial divided into equal sections dating from the first century AD, but only in the late Middle Ages such devices became usual.

The local people believed that their home city was better than Rome. Patriotism in Pompeii was really up to par. During the gladiator fights in 59 AD citizens quarrelled with visitors from Nocera. Battle was terrible, the amphitheatre hosted about 20 thousand spectators. As a result, thousands of injured and hundreds of killed and disqualification of the arena for 10 years. Fight was won by the proud Pompeiians, of course.

However, such long-term disqualification was not destined to last. Three years later in the year of 62, the nature sent the first signal for the Pompeii inhabitants – a major earthquake that rocked the city almost completely destroyed it and took thousands of lives. After that half-abandoned city plunged into chaos of crime, anarchy and barbarism. Temples were destroyed, rich house robbed, yesterday slaves turned into masters carrying out the trade with weapon. Locals gathered in central squares, prayed and even made sacrifices.

It took about 5 years to restore order. Although Pompeii was part of the empire, the emperor Nero gave up and did not want to help the wayward inhabitants. On their own the Pompeians rebuilt the city, and fled townspeople came back, and with them came more and more new residents who dreamt to find their place in the sun. According to historians, including Tacitus, the disaster was impetus not only physically. Pompeii concentrated on repairing the damages the earthquake had caused, determined to make their town even more splendid than before. Already in the 70th year, there were about 120 taverns, 40 bakeries, several dozen of factories sewing clothes. Business and trade began to fill local treasury again.

Unfortunately, it lasted not long. In the morning of August 24, 79, few residents paid attention to the black cloud over Mount Vesuvius which was long considered an ordinary mountain. In daytime it seemed that night came to the city: sky was shrouded with smoke, white ashes covered snow-white roofs and clothes. Inhabitants began to suffocate, and the earth trembled even more than in the year of 62nd. What happened next was probably hard to describe without being an eyewitness. One witness Pliny the Younger wrote that panic started because a giant pillar rose to a 20-kilometer height from the summit of the volcano, rocks fell down from sky, lava came closer...

Many residents rescued themselves, but unfortunately there were a lot of victims. According to rough estimates, from 2 to 12 thousand people died granted the city had about 20 thousand residents. Excavations which have started by accident 15 centuries later are still going on. From time to time we see and hear about the amazing archaeological finds, but still the most "common" exhibit is people forever frozen in the lava.