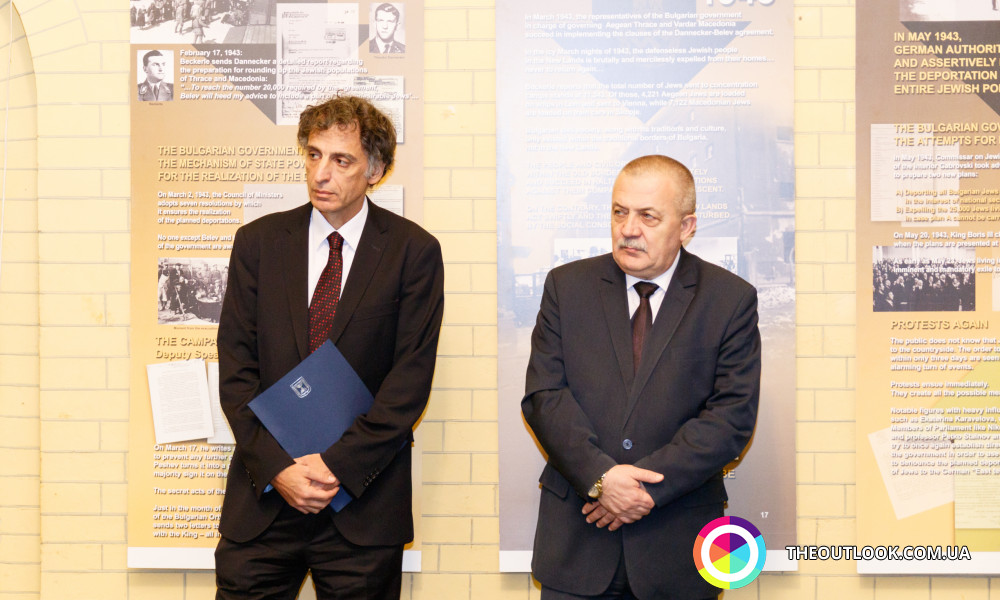 The embassy of Republic Bulgaria and State Israel to Ukraine as well as Department of culture of Kyiv city national administration and National historic and architectural museum Kyiv Fortress opened an exhibition dedicated to the destiny of Jews in Bulgaria.

The exhibition ‘The power of civil community: destiny of Jews in Bulgaria’ is dedicated to the 74-th anniversary since the day of salvation of Bulgarian citizens of Bulgaria, about the refusal of community to surrender to the plans of authority that wanted to send Bulgarian Jews in Nazi concentration camps.

‘In the dark days of the Second World War Jews were susceptible to the harassments along all the Europe. Well, the history which we discuss became a unique example when the members of civil society stood against the deportation of Jews into concentration camps. For that we are enormously grateful to Bulgarian nation. The verily salvation of Jews in Bulgaria is very important fact of our history’, the Ambassador Extraordinary and Plenipotentiary of Israel State to Ukraine Eliav Belotserkovsk reported.

As the head of department of culture of Kyiv city state administration Diana Popova told, the issue of Holocaust is quite a vulnerable for the entire Europe, including Ukraine. ‘Today’s exhibition is quite symbolical, as well, the same could be said about the place of arrangement, exactly, Kyiv Fortress because these walls experienced a great deal of people in the custody and undeservingly punished ones. The freedom of Bulgarian Jews is echoing with the history of freedom of all the Jews in the world as well as in Ukraine we know who become righteous gentiles, and today it is very important to remember about such a great action conducted by Bulgarian government which resisted to the orders of Nazi. We would like to express a huge gratitude for the possibility to touch such a historical heritage and that you have chosen verily this museum of Kyiv’, she made an emphasis on this fact.

‘When we celebrated the 70-th anniversary of Holocaust and salvation of Bulgarian Jews this exhibition became the central topic in the cultural activity of our diplomatic representation. It is a very important theme for us, and it still continues attracting attention to this period of history of Bulgarian nation. At posters there are documents that depicted a position of Bulgarian civic society and world community on the occasion of Bulgarian Jews. In the centre of this exhibition it was a position of Dimitro Peshev, Bulgarian politician, minister of justice whose initiative led to the salvation of 48 thousand Bulgarian Jews who received refusal of state to deport in German concentration camps’, the third secretary of embassy of Bulgaria to Ukraine Elena Slatinska-Ovanezova told.

The exhibition observes the specifics and decisiveness of Bulgarian civil community to stop the repressive politics. The deprivation of Bulgarian Jews is the prominent historical example illustrating that due to the reflection of a personal and political courage, the good mass consciousness and will power are able to oppose even to the most large-scale politics. The readiness to help and feel compassion is the strong weapon in the hands of citizens. The following of human rights and their guarantee is the compulsory reason for the peace and progress not being suitable to the compromises of the politics.

The exhibition will have lasted up to the 24-th of March.