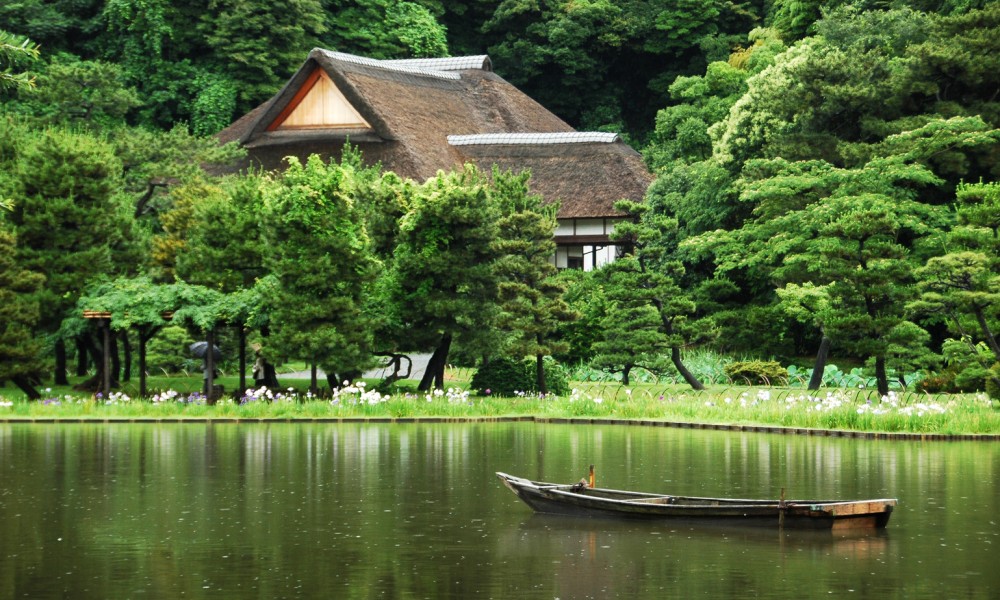 In Japan there is a city with the citizens who trust each other. It seems that they drink water from one source that flows along their houses. As well, they wash hands after the meals in the same places. Satoyama in translation means an ideal place for life in harmony with the nature. It is situated in Northern prefecture Gifu that is isolated from the rest of the world with the mountain tops and rice fields.

The city Satoyama is cut into two parts with Seto river. It used to be a wide channel that divided citizens to Samurai and peasants. The Samurai built sturdy and rich houses whereas others constructed small houses along the water on the opposite side. Today near the river, on both sides, every day children are crowding with bread crusts. The kids feed colored carps for which Seto river became a house. The fish is not afraid of people and takes food from the arts without hurry, swimming along the channel. Apart from that, there are lampreys, crabs, pigfish, and other living creatures in the water.

However, only carps feel the biggest confidence. Also, people are glad to see them in the houses. All the residential areas are equipped with the swimming-pools that are constantly full with the flowing water from Seto river. It takes these waters from the swimming pools in the main channel. Actually, such floods of water are the part of private possessions. The swimming-pools in the houses of Satoyama plays a very important role in the life of citizens. In such a water the vegetables are washed along with greenery, there dishes are washed after the meal. Most often the citizens of the city eat rice, meaning, a lot of boiled seeds come to the water. Nevertheless, they don’t tamper it but serve as the nutrition for the carps. The indicator of purity in Seto is the unique type of candle fish without scale that resides only in the pure sources. The surface of the flood also plays significant role. It has almost been covered with the thick layer of seaweeds. In the daylight the plants emit bubbles of oxygen raising at the surface of the water and cleaning the water with the oxygen. Satoyama is special not only because of the river flowing across the residential houses and vivid participation in the process of biotic community. The city is surrounded by the rice fields, there are many vegetable beds. In the forests nearby there are mushrooms and fruits that also serve the food for the locals. The wood is used by the citizens of Satoyama for new buildings and biomass what is the only source of energy for Satoyama citizens, in its turn. The citizens of Satoyama are sure to have got everything necessary for life. They are able to live in a calm manner in their almost perfect world even not taking the blessings of civilization.

Such an isolated life traditional for ancient Japanese villages has recently been actively supported by the government of the country. It gives possibility to people to do for a living not getting the outside help. In Japan which generally depends on the import of nutrition and energy it is the relevant question. At first, it is benevolent for the health of the people who reside in less stressful environment and, gradually, attract new tourists in the country. Apart from that, the government of the country has invented strategy or, how it is also called in Japan, reconstruction of transformation to the eco-settlements. The interest to the true-circle processing lifestyle in Japan is growing. The hundreds of tourists come every year to look how and what the ‘isolatos’ live. The office clerks from the neighboring Kyoto come to rest from the city vanity. Many of them for the first time take bicycles while everybody who wants that are able to help the locals to dig their vegetable gardens or catch a carp in the river. In the center of the settlement there is museum of folk crafts. It is prominent not only with its exhibition pieces but also because it is done without any nails. The builders gathered it like a puzzle using the ancient technique of Japanese masters. Those who are hungry take river fish in the small hasheries, houbamiso that is prepared at the leave of magnolia and drink sake.

Departure: Rotterdam
Destined to be a port, Rotterdam became the most non-Dutch city of the country. It is the only city in the Netherlands headed by Muslim mayor, it is also a home for the largest Caribbean diaspora and even has its own China Town. Innate inhabitants and comers are almost equally numbered here. But if we look seven centuries back, we will see only a modest settlement on the Rotte River protected by dam from floods.

Departure: Inverness: Search of Nessie or great whiskey at least
Macbeth Castle, mountains, hospitable pubs serving tasty snacks, fragrant distilleries and, of course, the famous Loch Ness monster – all that is concentrated in one place, the Scottish city of Inverness and its surrounding area. As regards tourism Inverness is significantly behind Aberdeen and Edinburgh, to say nothing of Glasgow...

Departure: Valletta
Red telephone booths, the largest concentration of armour and cold weapons inside area of one state, and a unique combination of grim "northern" architecture and mild climate - meet Valletta, Malta's capital. We invite you to come with us to this wonderful city, which still preserves the spirit of valour and courage.

Departure: Dakar
The Senegalese capital of Dakar is not only the most important city of West Africa, but also a city of extremes, a fascinating introduction if purpose of the trip is to "get acquainted with the Black Continent, but gently and smoothly". In addition to many civilizational and habitual to modern people attributes of life, every moment you feel spirit of Africa, at once both intimidating, romantic, off-beat and deeply alluring.

The sun under the glass. Best greenhouses in the world
For 1 month spring has been reining our planet, now just watch warm coats to change for thin jackets, cold and mediocrity for the bright sun. And, of course, what sort of spring it could be without green trees and beautiful flowers? Well, in order to make your expectation of long-awaited colours and flavours less agonizing, we offer you to enjoy the beauty that year-round marvels visitors to the most exciting indoor gardens.

Let’s talk in Japan or how to understand a Japanese
Despite the title, in this article we won’t talk about peculiarities of Japanese hieroglyphs and pronunciation. First of all, because there is a whole bunch of specialized literature and secondly, if you don’t study Japanese such knowledge may widen your horizons but will be of no use in practice whatsoever.