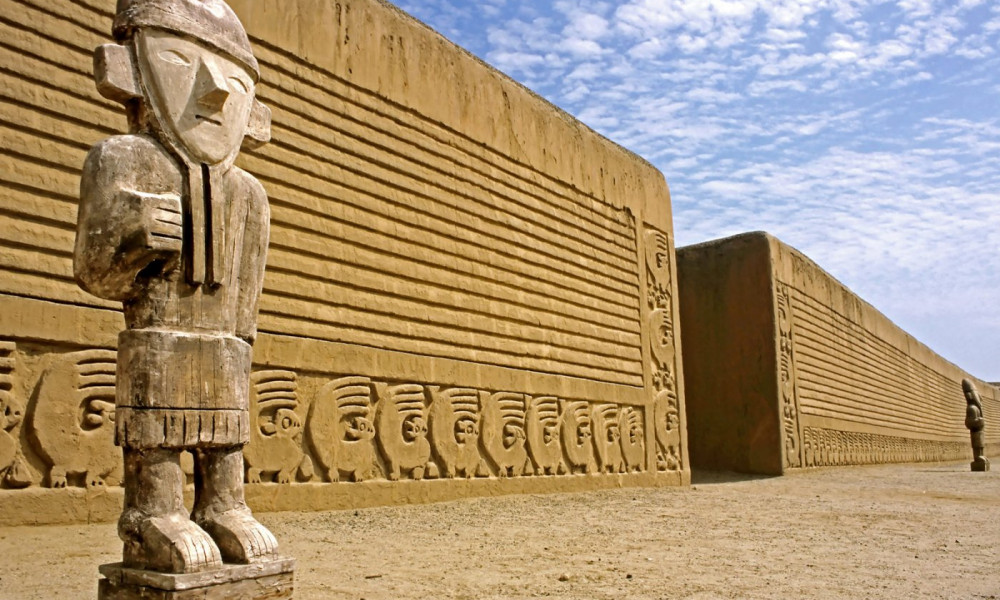 Experienced travelers tell that one could watch the ruins of ancient settlements in the Andes during several months, moving from one region to another. Particularly, the richest one in archaeological complexes of is the western coast of the Southern continent. A long time ago, some of them, such as Machu Picchu, have become popular with tourists, others are just beginning to open their doors to curious people. Not far away from the Peruvian modern In the blossom of the settlement, about one hundred thousand people lived in Chiang Chan. This is quite a lot, if we recall that in Machu Picchu, in his best years, lived five times less. A city was made of clay and straw. Scientists do not fully understand how Chiang Chang survived, given the fragility of such building material. Its walls withstood invasion of the Incas. They failed to invade the city by force. They won it by cunning, blocking the river, near which the people of Chim built their capital. The greatest destruction of Chiang Chang is suspected after the conquest of the continent.

Today it is being restored. Recently it was listed as a UNESCO World Heritage Site. In ancient tombs are found precious stones and ceramics are found out. Archaeologists work in Chiang Chan now. The excavation area is about twenty kilometers. It is already clear that Chiang Chan was protected in a circle by a wall, there complicated multilevel irrigation canals were dug and the reservoirs were excavated. The ground part is a series of labyrinths and thick walls. The city itself was divided into ten sections. All of them were surrounded by their walls. Inside each district there were squares, temples, houses, water storage and provisions. All the walls of the ancient masters were decorated with ornaments: birds, fish and graphics. Most often there are images of pelicans, crabs and turtles. The voluminous carved figures were painted with black, white or yellow paint. Of course, now the walls are burned out and the color has lost its depth. The religious centers of Chiang Chan were the Each district of Chiang Chan was ruled by a separate prefect. Such merit was given to especially courageous warriors

Not far from the city the border wall of the state of Chima is laid. It stretches from the Pacific coast and is lost in the depths of the continent. Itsremainingpartismorethan

Spanish legends say about the untold treasures found in the

In the summer, crowds of schoolchildren come to Chan Chan. Visit to the ancient city is included in the mandatory program for raising the patriotism of young Peruvians