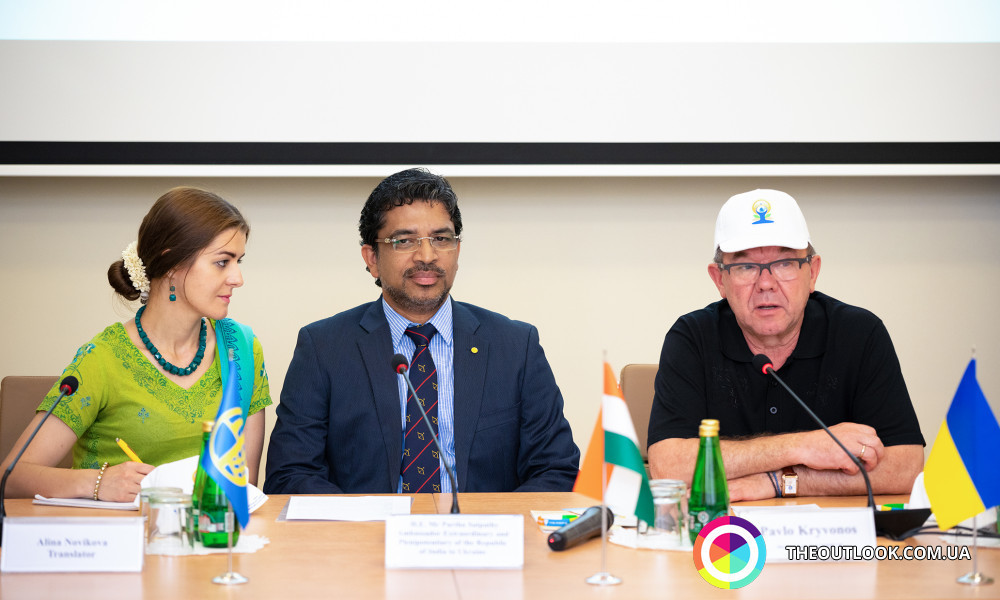 On June 18, 2019, at the GDIP Media Center, a press conference was organized by the Ambassador Extraordinary and Plenipotentiary of the Republic of India to Ukraine Partha Satpathi to celebrate of the International Day of Yoga and the Festival which will take place this Saturday in the Mariinsky Park.

The event was attended by representatives of the diplomatic corps, sports schools and sport clubs, the public and the media.

Opening the event, the General Director of the State Enterprise "GDIP" Pavlo Krivonos congratulated the guests of the event and thanked for many years of cooperation with the embassy of India and one more opportunity to join the organization of the Yoga Festival.

The Ambassador Extraordinary and Plenipotentiary of the Republic of India to Ukraine Partha Satpathi spoke about the ancient Indian yoga tradition. He noted that yoga is an invaluable gift to all mankind which helps to achieve unity between the body and mind, thoughts and actions, self-control, and general well-being. Yoga is not only a physical exercise but a journey towards the unification of Personality, Nature and the World. He recalled that having recognized the tremendous value of yoga and its potential for transforming human life, in June 2014, the United Nations proclaimed the International Day of Yoga (IDY) to be celebrated on June 21. The UN resolution calls all member countries to celebrate the International Day of Yoga to raise awareness of the benefits of yoga practice.

The People's Artist of Ukraine Natalia Mogilevskaya who shared her yoga practice experience became the star guest of the press conference. The singer emphasized that yoga classes are not only useful for health, but they laso became some kind of physical activity and they help to purify the soul and seek harmony.

"Yoga, in my opinion, is a science. After all, what is science? For example, we conduct an experiment, look at the results, draw conclusions, write them down, make texts. And philosophical texts about yoga recorded results of the practice of more than 5 thousand years. This is an amazing ancient system about how to live, how to be healthy, how to keep the balance of soul, body and mind as well as how to be happy. To do this, there are simple truths: speak sweetly, think sweetly, make friends, not enemies, " said Ms. Natalia.

The performance of Daria Antonenko, the representative of the organization of the international unions of the independent yoga centers of the Ukrainian Federation of Yoga, and her colleagues was the highlight of the press conference. Yogis taught the guests of the meeting to breathing exercises, and showed many examples of physical exercises.

We invite everyone to visit the Yoga Festival in Mariinsky Park, scheduled for June 22, 2019, from 14:00 to 21:00, to learn about the benefits of yoga, to try Indian cuisine, to see the different directions of Indian culture. Entrance and participation in the event are free.