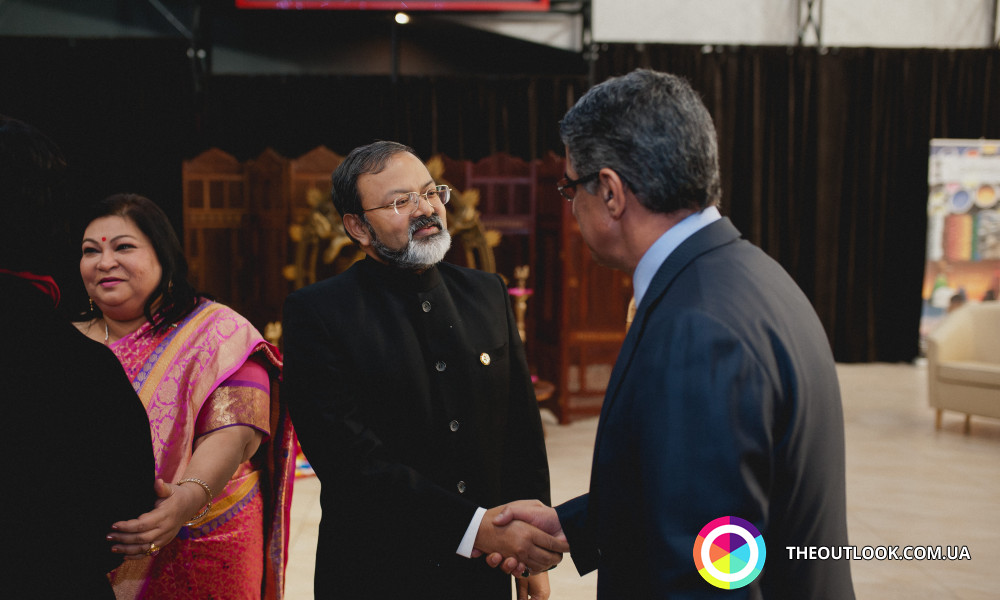 Starting the evening, Mr Ambassador greeted and gratified for the visit all the guests of the holiday.

‘As you know, on the 26-th of January 1960 we presented to ourselves the Constitution which during the recent 67 years has endured the challenge of time and complexity of incredibly different country. We celebrate this day with the special extent because we mark the 70-th anniversary of independence of India and 25 years of maintenance of diplomatic relations with Ukraine’, Mr Bharti claimed.

He also remarked that during 70 years India became the example for all the world. Regardless of the difference of languages, religions, and economic status of the citizens, integral progress which India reached gave the sunrays of the hope in various countries all around the world. ‘The history of India is the history of belief and development. This is a history of hope and success. For the last several years when the major part of the world encountered the economic decrease, Indian economics increased by 7.5%’, the Ambassador emphasizes.

As he told, for the last 25 years Indian and Ukrainian relations have become closer and more effective. ‘We have always got prolific collaboration between our countries in the area of trade and defense. New foundations have already been prepared to maintain our relations even more. We have made new steps for development of the partnership in the niche areas such as agriculture, pharmaceutical production, tourism, and education’, Mr Bharti claimed.

Republic Day is the official holiday of India; it was established in 1950 when the Constitution acting till now came into power.

Republic Day is one among three national holidays of India while two other are represented by Independence Day (15-th of August) and Mahatma Gandhi’b birthday (2-nd of October). This day in the capital of India, New Delhi, the official parade on the ceremonial prospect Rajpath is made.

The procession consisting of brightly decorated platforms that represent different states starts from Presidential castle to the Gates of India. There are also orchestras, folk dancers, columns of pupils and scouts. However, the parade follows an official ceremony of arrival of the president and prime minister of India at Rajpath and military parade of the armies of garrison of the capital

As well, the theater performances, festivals of folk music and dances are coincided with this day. The peculiar epilogue to the celebration of Republic Day in the capital is the ceremony called as ‘Ringing-off signal’ where guardsmen of defense in historical uniform take part.

The ceremony is organized at the square Vijay-Chouk at the second day after the holiday. There are heads of government and members of diplomatic service. Its roots go to the time of Middle Ages when the sunset was the signal for ceasing of the military activities and army sounded the retreat.

Before the sunset the army wind bands play but when sun descends behind the horizon, the music becomes quieter, and firework begins.

In the majority of cities in Republic Day the official events of the different extent of formality are organized. For instance, in all the capitals of the states the governor compulsorily raises the national flag of India.