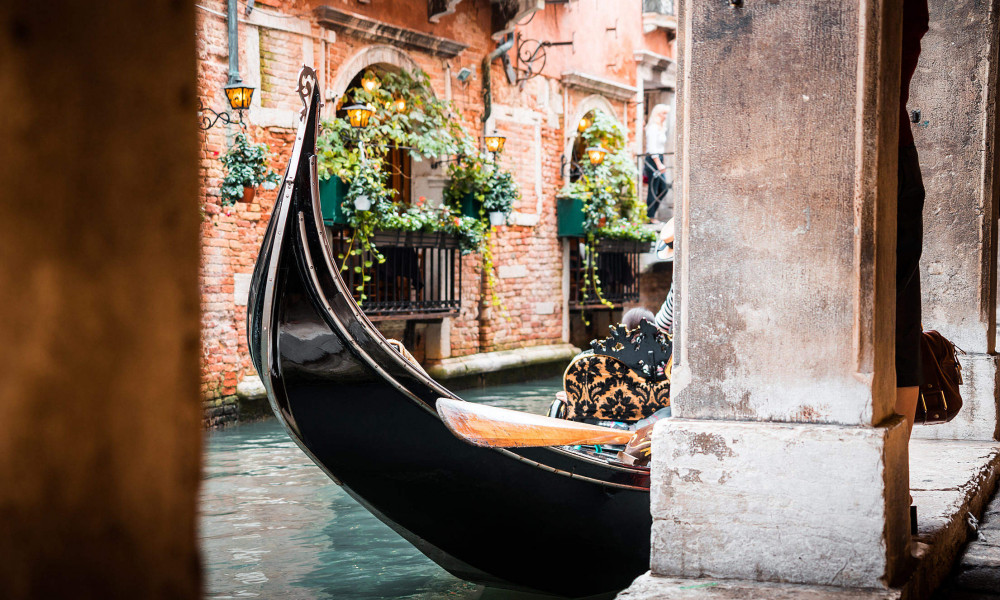 Perhaps, there is no such a person on the planet who did not hear about the unique Italian city on the water. During several centuries Venice with its amazing architecture, fantastic landscape and own atmosphere has been attracting people from all the corners of the world. So as to feel it and see under unexpected corner, one should swim on the legendary gondolas.

From Romans till nowadays

Venice is interesting not only with its unusual landscapes but also the own legislation act. Its main parameter claimed that in the historical center one cannot use the wheel transport. Taking into consideration the fact that the center is flooded with water, the person has only two variants, either walk on foot (what happens not always) or swim on gondola or municipal ship.

Such habits work here for a lot of time that’s why people get accustomed to the boats. It is really native thing for Venetians. Even ancient Romans in IV-V centuries tried to use the local channels as the specific thoroughfares with the only problem of their narrow essence. When the city despite its flooding was still built out getting an important trade and administration status for the whole Italy, it became evident that boat should be narrow so as not to create the blocks and accidents. In XVII century the parameters of gondola were fixed. They have been used till now. According to them, the length of boat is 11.5 meters, width is 140 centimeters, without passengers – 400 kilos. The gondolier is not able to use two oars, only one because of the narrow essence of the channels. The corpus is covered with the special lake. As for the color, all the Venetian swans are black. Today nobody knows why it happened like that. However, any citizens could tell the romantic story from the Medieval Age.

THE CARNIVAL OF VENICE: I KNOW YOU, MASK

There it is said that young wife of the local rich person and politician secretly at night met her beloved man who had come to her house on the black boat that was like the thorn in the side for the neighbors. Then every gondolier colored his gondola in any colors. The angry husband could not do anything with that while the divorces were not practiced then. That’s why to hide the shame a bit, he produced an order to make all the gondolas black. The several centuries have passed, but the boats of another color could hardly be met. Even the celebration boats, used for the weddings or other official ceremonies are colored like that. This outside asceticism is the inevitable part of their style. The most prestigious profession of Italy

In times of Roman Empire the gondolas were ruled by the slaves, most of all the enduring black-skin men taken to the country for the dirtiest work. However, since the time, this profession became very prestigious because the art to go along the narrow city channels, not be late and support the special atmosphere aboard is appreciated a lot. The art of ruling the boat has been transferred like the heritage for many centuries while the children in the families of gondoliers since young age learn all the beginnings and prepare for the exams that are passed with flying colors only by the best. Venetian association of gondoliers accurately looks at the work of its member, and year by year it increases the requirement for everybody who wants that. So as to get the right to be gondolier, one needs to know at least English in a fantastic way, be aware of Venetian history along with the history of Italy, possess good manners. Nobody should forget about the skill of swimming. It only seems that there is nothing complicated. Indeed, not everybody is able to manage the boat. Today in 260-thousand Venice there are only 425 boat drivers and 150 people who are able to substantiate them. The working day lasts for 15 hours while the dress code consists of the striped T-shirt and straw hat. As there are many tourists in the city (annually not more than 20 million), their transporting business is quite profitable. The basic 40-minute trip costs 90 euro while every 20 minute plus 50 euro. Despite the taxes and expenditures connected to the exploitation, the gondoliers still earn enough especially during the season.

One should understand that the whole center of Venice moves in gondola. Apart from the tourist, the channels are full with those who deal with the gathering of the rubbish, delivery of the product and post. The police, ambulance and communal payer also use boats. 60 thousand Venetians who live in Old city also have at least one swimming vehicle for a family. In the meantime, the boat is impossible to be bought in the shop, it is made only by the special order in the dockyard. The cost of the simplest one is 35-40 thousand dollars, however, there is no limit. The term of exploitation is 15 years. Nevertheless, not all the citizens of Venice are able to cover such expenses, the center is gradually getting empty. The local people are able to sell their real estate to more wealthy ones while they move to the suburbs and outskirts when there is no water while the wheel transport is allowed. According to the forecasts of several futurologists, in 30-40 years the historical center of Venice will be crowded only with the tourists and the richest people in the region with the personal gondolas. By the way, everything is ready for that. Almost everywhere the parking places are equipped, in the yards instead of the common car services there are workshops where the problems with the boats could be removed. At the most vivid water crossroads and thoroughfares there are traffic lights and traffic signs. This is absolutely another world where it is hard to get used to that if you are the traveler. Here everything is penetrated with the authentic, invisible details, particularly, faces, smiles, smells, bridges, cobblestones, and platform. Everything is ripped, breath-taking and unusual, mostly because of the gondolas, these black Venetian swans that noiselessly slide along the water space of the great city. Due to the construction of gondola the boatman puts equal efforts for its movement regardless of the number of passengers however, according to the safety technique, it can’t be taken more than six people aboard.

On the head of the boat there is beautiful iron knob ‘ferro’. However, it is established not for the aesthetic purposes but for the equality, because the gondolier is situated behind, it is able to baffle gondola. In the form of ‘ferro’ there are six projections, the same as in Venice and the nearest regions.

CARAVEL WILL BE BUILT HERE: SHIPS BORN IN KUWAIT

Enrolment board from Association at the examination is able to ask the candidacy sing. This skill is traditionally considered as the obligatory for anybody who wants to be a boatman because during the romantic trips tourists love listening to the songs live.

In 2010 for the first time the gondolier became a woman. 24-year-old Georgia Baskalo succeeded in getting license and continued the business of her father who voluntarily worked more than forty years gaining the huge reputation among the colleagues and citizens.

For the production of one boat they need the materials carved out of the trees of eight types, such as oak, elm, key lime, larch, fir, cherry, nut and red tree. There 280 separated elements made from them. They form the main symbol of Venice.