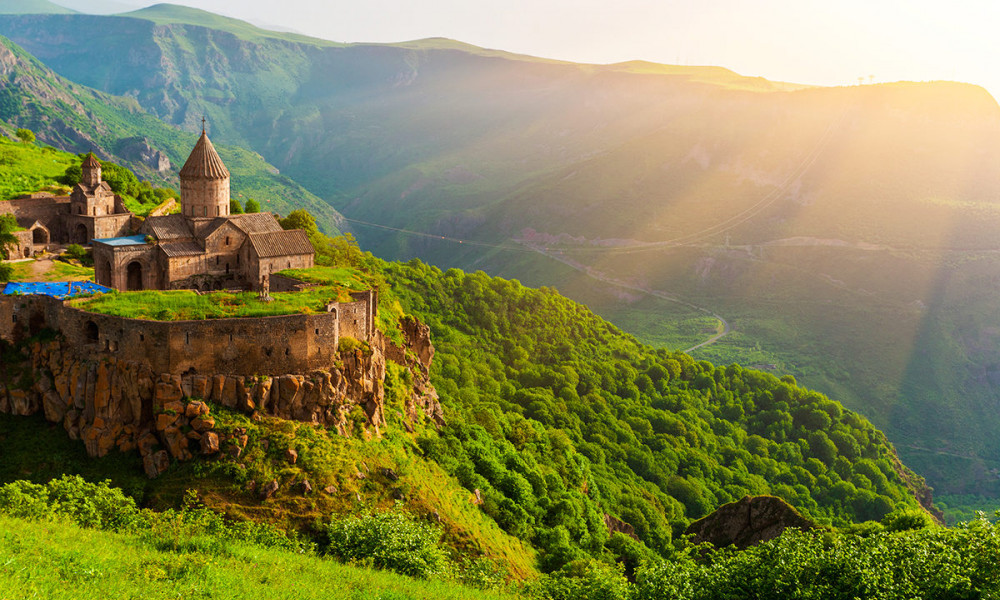 ...The virtuoso chisel inhaled the heat of a living soul in a cold stone block and created a khachkar - an inspired narrative about the spiritual search and longing for a lost paradise, unhurriedly unfolding tenacious rings of ancient mysteries in the curls of mystical ornaments.

In translation from Armenian "khachkar" means "cross-stone" - a commemorative sign with a pattern in the form of a cross, braided with a patterned frame. One can only marvel at the boundless imagination of the masters: among the fifty thousand stones scattered throughout the cities and villages, one can not find two identical khachkars - each one is unique and unique.

The basics of the artistic craft were laid in the XVIII-XVII century BC. e., in the golden age of the ancient kingdom of Urartu. With aim to perpetuate an important event, the Urartian kings erected monumental structures in squares and along roads in the form of vertical tetrahedral plates, cut by cuneiform writing.

After the adoption of Christianity, pagan temples were hastily rebuilt in churches and monasteries, marking the lands reclaimed from idolaters by the symbols of the new faith, cut down from tufa and basalt. Strong volcanic rocks survived the onslaught of enemy guns during the years of the struggle against the Caliphate, repelled the attacks of the elements and danced with dignity through troubled centuries the bizarre patterns in which the teaching of the Armenian Apostolic Church on the resurrection and salvation of the soul was encrypted. It is no coincidence that the khachkars in the old cemeteries face west, where there is a gloomy kingdom of the dead. The life-giving symbol of faith points the way to paradise from the abode of untimely sorrow, affirming the eternal triumph of life in the boiling abundance of flowering vines and filled fruits that frame the wings of the cross.

The early khachkars were cut out on temple facades and on tetrahedral steles mounted on horizontal slabs. In the center there was a double-winged cross, filling the free space with ornate plant and geometric ornaments. The porous structure of the stone facilitated surface treatment, allowing you to create masterpieces with the help of a simple set of tools, and for drawing small details to this day use needles. The most ancient is the khachkar, established in 879 by the wife of Ashot I Bagratuni in Garni.

Khachkars of the classical period are resting on a three-level foot, embodying Golgotha. At the base of the stele is a circle depicting the skull of Adam, from which, trampling death by death, a carved, cross-eagled cross springs, resembling a fairy flower or a wonderful world tree. The rare examples of khachkars with the face of the crucified Christ are called "The Savior" and endowed with healing properties.

The middle part of the composition reflects the vicissitudes of earthly life, full of passions, temptations and painful dilemmas. However, there is someone to guide the lost soul to the true path: in the openwork weaves of branches and clusters framing the cross, twelve spiral elements marking the apostles are clearly visible - six on the right and left. Sometimes vines and garlands are adjoined with an elaborate grille, woven of seven stars, which are related to the seven heavenly seals. Closed above the top of the cross, the arch symbolizes the kingdom of Christ; on both sides are the sun and the moon. God's throne can support the four evangelists, represented in the allegorical images of a lion, eagle, bull and seraph; also there are figures of the Virgin, Joseph, Mary Magdalene, saints, prophets, angels, historical figures and legendary warriors.

The heyday of stone-cutting art in medieval Armenia came in the 12th-14th centuries, when two generations of skilled architects were replaced. Many khachkars of that epoch depict the names of the brilliant masters - Momik, Timoth, Pogosa and Mkhitar, gracefully woven into an intricate ornamental ligature. Stunning creations have been preserved in the monastery complexes of Airavank, Echmiadzin, Tatev, Haghartsin and Sevanavank. In the cave monastery Geghard khachkars, painted in bright orange, are carved directly on the cliffs, and in the Valley of red rocks near the Noravank monastery there is a real diamond - a giant stone, seen by a blizzard of grape leaves with carefully traced veins that are just about to move in the wind.

Most of all khachkars were preserved in the abandoned Noratus cemetery along the shores of Lake Sevan. Archaeologists counted here about nine hundred luxuriously decorated tombstones. Residents of the surrounding villages without a twinge of conscience graze livestock in the expanses of the necropolis and generously treat visiting tourists with amazing stories about local wonders.

After the conquest of Armenia by Iran, traditional stone-carving art was strongly influenced by Persian culture: narrowed vertical forms, arched vaults and lattice arabesque patterns were borrowed. In the cemeteries of Kamo, Martuni and Old Jugha, many late-style pearls are found.

Alfama: Moorish heritage of Lisbon
Today we are inviting you for a walk in the oldest neighbourhood in the city of Lisbon, the famous Alfama, an emblematic quarter we often see in the movies and works of popular culture when it comes to the Portuguese capital.