From Kyiv with Cake 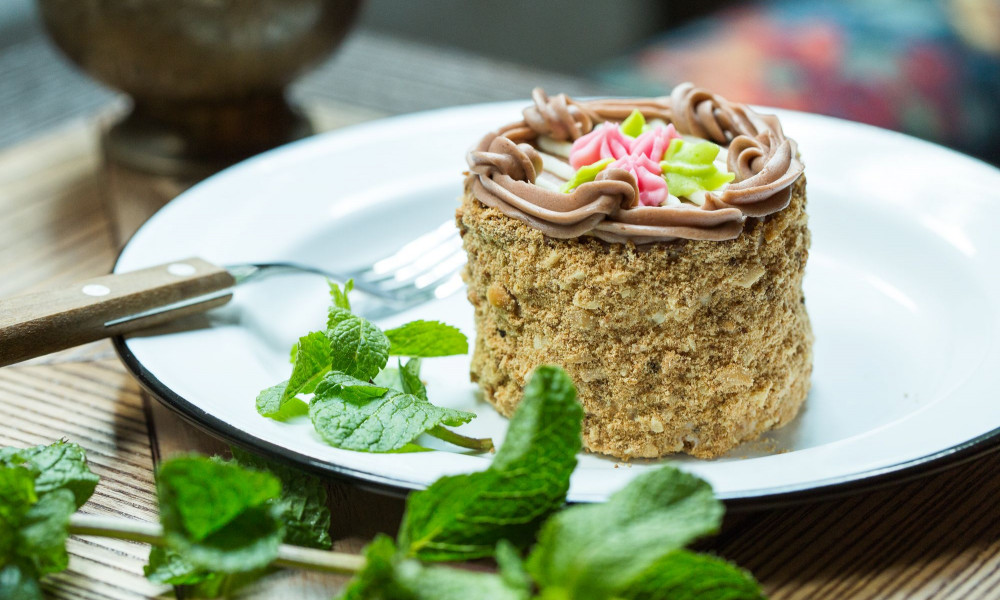 Airports, railways and bus stations in Kyiv aren’t much different from similar objects in other big cities. But that’s just at first sight. If you have a slightly closer look at passengers, you can see that every third one carries a round white-and-green box. It is in it where the part of the majestic city, that can be legally carried away as a souvenir, is – we mean the famous Kyiv Cake.

Gastronomic legend of the Ukrainian capital and the country as a whole has struck with its sophisticated taste for over sixty years. Official launching date of the Kyiv Cake, Kyiv’s most popular souvenir, is 1956. Its creation became overgrown with myths and mysteries a long time ago, but all of them can be divided into two large concepts of the cake’s creation: accidental and on purpose. According to the former one, the dessert, that was destined to become the hottest-selling item, a terrible deficit and even a kind of currency in Soviet times, emerged as a result of a mistake of a young employee of a giant confectionary factory that bore the name of Karl Marx back in 1950s. Allegedly, 17-year old pastry-cook Nadiya Chornohor forgot to put egg whites away to cold so they stayed entire night in warm temperature to turn into semi-liquid substance. In the morning, upon being severely reprimanded by her supervisor, the girl supposedly suggested hiding the misdeed by cooking crunchy pie crusts with nuts, complement them with Charlotte custard and decorate the surface with colorful patterns. And just like that, to get away scot-free, Nadiya Chornohor and her boss Konstantyn Petrenko came up with a base that struck big shots of the factory with its uncommon combination, so the former ones approved mass production of the cake and called it, to spare brain-racking efforts, Kyiv. The other consept, sure enough, lacks romance and is even dry unlike the delight itself. According to it, experiments in order to make a new cake were being held on the abovementioned factory by edict coming from the top becasue there was a traditional goal of those times facing them: to create something special "for a festive date". And it was during testing recipes for fillings and crusts when the combination was invented and later perfected for it to be kept as top secret and for millions to develop affection towards it. The fact, that the original recipe of the Kyiv Cake contained cashew and palm oil, so rare and expensive for Ukraine that nobody had a faintest idea about them without specialized consignments, testifies in favor of this version. However back in the days the USSR made friends and maintained active trade with India and thank to connections of the communist highest ranks, management of the Kyiv confectionery factory had access to aspired products to hold their tests with. Therefore nobody could make a cake of such expensive ingredients by accident.Photo etsy.com

Today there is no tellinfg for sure what really happened and each lover of the cake can stick to the story he or she feels like, so let's talk about hard facts. As soon as in 1960s, after being the fashion merchandise, Kyiv Cake at the price of three rubles and thirty kopeks (given average monthly salary of 100 rubles) became the most famous dessrt in the entire Soviet Union. With all the huge demand, it was sold in several selling spots of the city, but it had no influence at its status of a deficit, which meant that in order to taste it or purchase it as a gift, one had to wait in block-long lines and overpay. Vendors from such shops as Ukrainian Delights and Central Grocery Store, selling the cakes, used to become significant friends of a family, as nearly as relatives, because one could ask them to hold back the sought-after dessert.

Driving or flying somewhere from Kyiv without bringing the sweet souvenir was one of the most dreadful "crimes" of those years, even relatives quarreled over it not to mention friends or colleagues who were expecting the aspired delight as much as the person bringing it. Today it is hard to believe, but especially for transport it to distant republics – to Caucasus or Middle Asia – people used to freeze the dessert and carry it gently wrapped in bedcovers for it not to get spoiled or crushed. Famous round boxes, initially depicting Pedestrian Bridge over the Dnipro River, that was later replaced with another symbol of Kyiv, chestnut tree, were raised to the status of iconic ones, and there was never enough of their contents, even despite production capacities with normal production rate of one pastry-cook over one shift at the factory constituting 120 cakes – and given a number of employees in shops, it is even hard to imagine production volumes... In years of crisis, 1980s-1990s artisans, who were bringing the pleasure of the Kyiv Cake to the world, stood up to the onset of capitalism time with its expensiveness, when they had to refuse cashew in favor of cheaper hazelnut and later peanut. Number of produced cakes dropped first to turn them into unthinkable deficit in the last years of the USSR’s existence – due to it, the delight used to be stolen from means of transport and in the streets. Later, the main souvenir disappeared from the market for a while.

Nowadays Kyiv Cake is produced in large quantities and it continues to be liked by a lot of people. Despite incredible number of cakes in shops and the fact that one doesn’t have to overpay for or become obliged to those who could obtain them, the legendary dessert hasn’t become a less desired souvenir – both people who lived in the time of USSR and new generation of tourists, including the ones from the West, bring it home nostalgically from the capital of Ukraine, because, all legends aside, the cake really is fabulously tasty and distinctive. If it hadn’t been like that, it simply wouldn’t have survived in the free market when goods from all over the world flooded soviet shelves. This means that the Kyiv Cake fully deserves the attention and public affection that emerged over sixty years ago.Mini-sculpture "Kyiv cake" by artist Daria Vovk in Kyiv, photo mag.relax.ua

Hutsuls: Ukrainian highlanders
How can we blame foreigners for not knowing our country, even if the native Ukrainians now and then mistakenly and stereotypically refer to all the inhabitants of the western regions of Ukraine as the Hutsuls. Hearing it, representatives of this ethnic group of Ukrainian, isolated by picturesque nature of the Carpathians, just smile. We suggest to climb up with to their mountain villages and get more acquainted.

GDIP celebrates its 27th anniversary and the Diplomats offer congratulations!
On May 16, 2019, Embroidery Day and the 27th anniversary of the founding of the State Enterprise “Directorate-General for Rendering Services to Diplomatic Missions” were celebrated at the Kyiv National Academic Operetta Theatre.

Charitable dance. Foreign diplomats attended the annual ball in the IIR
The Institute of International Relations of the Taras Shevchenko National University of Kyiv and personally the director Valerii Kopiika invited everyone to support the student initiative of the Charity Ball IIR-2019.

Visit of diplomats to the city of Ostroh
This Saturday, on February 23, 2019, Ambassadors Extraordinary and Plenipotentiary of foreign states, representatives of diplomatic missions, international organizations, the State Affairs Department of the President of Ukraine and the Ministry of Foreign Affairs of Ukraine visited the city of Ostroh, the centre of origin and development of Ukrainian Education, at organizational support and participation of the Directorate-General for Rendering Services to Diplomatic Missions together with the National University of Ostroh Academy.