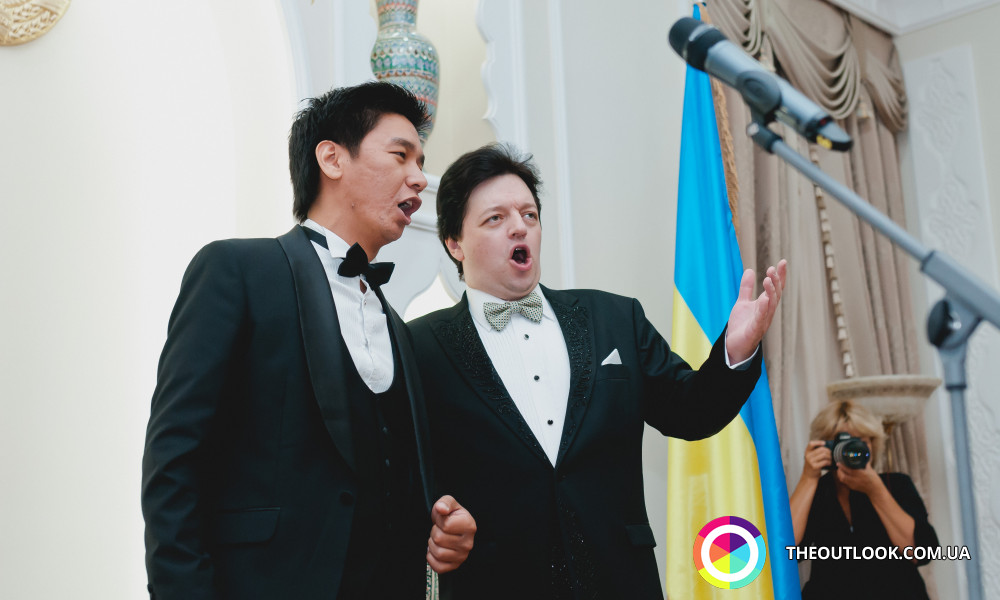 On the 18-th of June 2017 the Embassy of Uzbekistan to Ukraine on the occasion of Medical workers of Ukraine day organized the musical evening ‘Music is the boundless art’ for the teams of the Center of children cardiology and heart surgery of Healthcare Ministry of Ukraine and National Museum of history of Ukraine in the Second World War.

The evening where the activists of culture, science, workers of medical scope as well as business community and representatives of Ukrainian mass media participated became a continuation of an overnight success of the series of informal meetings with the prominent representatives of Uzbek and Ukrainian culture organized in the Embassy.

Starting the evening, the Ambassador Extraordinary and Plenipotentiary of Republic Uzbekistan Alisher Abdualiev gave warm-hearted congratulations towards medical workers with their professional holiday noticing that without their open hears and careful arms it is hard to imagine our health and emotional calmness. As he told, the Embassy successfully collaborates with the Center of children cardiology and heart surgery. During the last three years in the Center they made the most complicated operations on the heart for twenty-four severely ill children from Uzbekistan. In the meantime, in the connection with the nasty forms of heart disease, the majority of them got refusal in arrangement of surgery operations in other countries.

As the gratitude, the Ambassador gave to a team of the Center of children cardiology and heart surgery the gifts necessary in the household, as well, he presented computer technique to the collective of National Museum of history of Ukraine in the Second World War.

Coming to the musical part of evening, Alisher Abdualiev remarked that along with the successful bilateral projects in the scope of trade and investments, Uzbekistan and Ukraine collaborate closely in cultural and humanitarian scope. The development of relations in the stated area is one of the key directions of the Embassy’s activity. It was remarked that on a regularly basis the creative teams of the sides participate in the international competitions arranged both in Republic Uzbekistan and Ukraine. The tight connection between musical academies, book producers, and libraries of both countries is established.

In front of the public there were two musical talents, particularly, the Honored artist of Uzbekistan, bass-baritone Jenisbek Piyazov and Honored artist of Ukraine, tenor Nicholai Shulyak represented to the spectators the main parts of the national and international opera repertoire. The opera singers performed in live all their songs.

The conference hall of the Embassy was full of guests and connoisseurs of the classical opera music.

Jenisbek Piyazov became a real discovery of the evening! As the all-rounders said, he sang Bizet’s songs of Escamillo from opera ‘Carmen’ and other plays known internationally. His charming voice that allowed to come from baritone to bas easily attracted everybody.

In his turn, Nicholai Shulyak is the artist owning the pleasant, light and clear tenor was brilliant at performing the romance of Nemorino-Donesetti, the song of Duke Verdi, and the part was sung clearly and soundly. The singing of Nicholai was easy-going, free, bright and light.

The audience exploded with the applauses. The spectators applauded and shouted to the singers: ‘bravo’ after each performance of the songs.

After an official part the guests were able to enjoy the dishes of Uzbek cuisine.

In general, the evening of Uzbek and Ukrainian cultural dialogue was organized in friendly and pleasant atmosphere.

In the end Alisher Abdualiev remarked that Embassy was interested in doing a lot for the further enforcement of the friendship between two countries so as to make relations between Uzbekistan and Ukraine come to a new cultural level and reach more in the cultural exchange together.