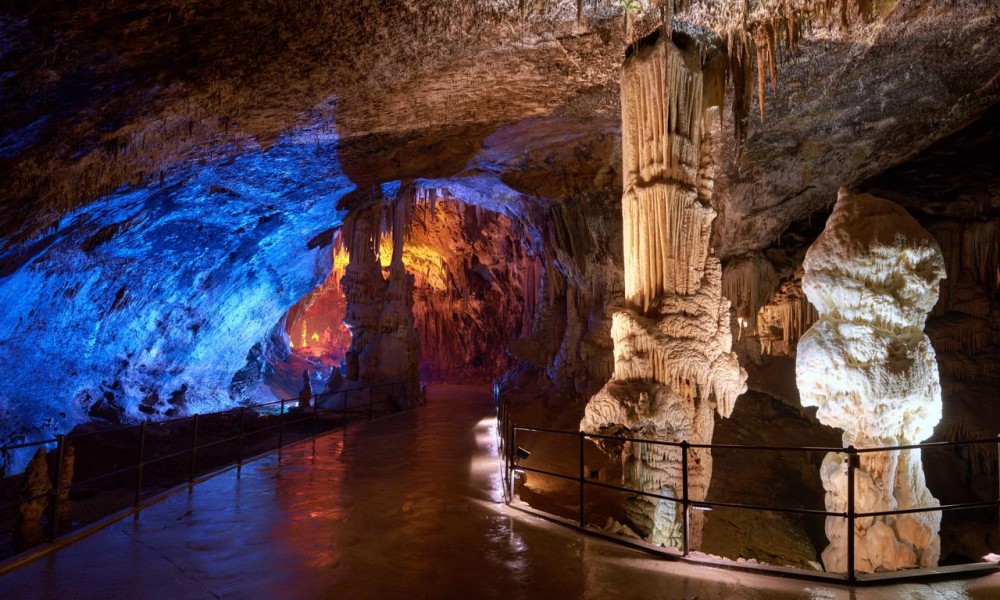 Having taken tens of millions of visitors in a couple of hundred years, the Postojna Cave made Slovenia being proud of it because of the main tourist attraction in the whole country. The maze of stone tunnels, halls and corridors, carved by nature itself, plus modern services for guest travelers have made these grottoes one of the most popular in the world.

To get into the cave, you need to go to the south-west of the country, fifty kilometers from the capital, to Postojna where the system of karst caves is located. The first visitors descended into the stone grottoes at the beginning of the XIX century, although the complex itself, according to scientists, was formed hundreds of thousands of years. To date, researchers have been able to open 23 kilometers of the way to which they welcome travelers. But you do not have to walk the entire route because there is a narrow-gauge railway equipped here which allows you to look into the farthest corners of the cave and get some rest, having a ride in the open trailers. Also greatly simplifies the tour and electricity. Besides the fact that it gives an opportunity to examine all the “fancy” more carefully, it also increases safety, so that someone does not accidentally hit his forehead on stone piles or fall into while looking at the impressive frozen beauty.

Natural creations, like randomly scattered museum pieces, adorn the rooms of the underworld. In one of them, the walls of the corridors are shimmering in such a way that they seem to be either cast from metal or carved from marble. A variety of columns, decorated with openwork modeling, which, with modern lighting effects, changes the shade from light pink to red, are supported by ceilings. And on top hang hundreds of stalactites of various shapes and densities, resembling stone icicles, which, with one wrong movement, immediately fall off and scatter into tiny pieces.

Having taken a ride on the train to the next room, you get into the karst "forest". At its center there is a huge stalagmite cypress, and indeed it looks like a real tree. The next station is equipped on the edge of a cliff. Below the river Pivka roars, which, running through the caves, breaks out into the light, and in the “above-ground” world is already known as Unitsa. The two banks of the reservoir are connected by a small bridge involved in a recent discovery. The researchers noticed that over the 20 years of operation, the stalactites formed on it grew by as much as 10 centimeters, and this suggests that the cave continues to be replenished with new exhibits...

On the way back, according to the planned stop, tourists are landed on the coastal "platform" to acquaint with the unusual inhabitant of Postojna-Yama - the mythical proteus.

This amphibian resembles a lizard, a fish and a snake at the same time. Medieval legends call him a more proud name - “dragon-olm” - and say that this is a young creature that was safely hidden by fire-breathing parents in deep dungeons, in which it was rather difficult to get into those times. But, as the adherents of the scientific approach have found out, they do not turn into a huge serpent, having no idea how to fly, and besides, due to the constant “registration” under the ground, it’s absolutely blind. Eh, Mother Nature would have known that electricity would be carried out here, probably, would give the poor creatures, who stare at the newcomers, at least some percentage of view. Other locals, like spiders and scorpions, are also deprived of a visual sensation due to their constant stay in pitch darkness, which soothes those suffering from arachnophobia.

Going on a tour, you should definitely grab some warm clothes: the temperature in the winter and summer in the dungeon does not rise above 10 degrees. A raincoat also won't be bad, water often drips from the ceilings with lime dissolved in it. But, despite these minor inconveniences, Postojna Cave will certainly be included in the list of the best places that transfer to the stunning world of stone magnificence.