Nowruz Is Solemnly Celebrated at the Embassy of Uzbekistan 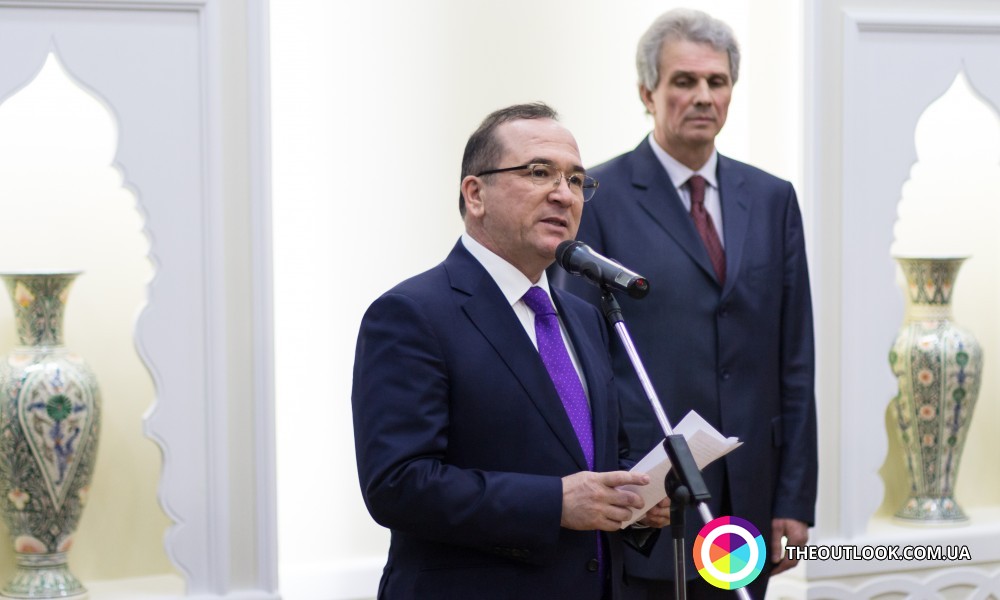 On March 21 Embassy of Uzbekistan in Kyiv orchestrated a solemn event on the occasion of Nowruz spring fest that was participated by representatives of the Verkhovna Rada, Ministry of Foreign Affairs, Ministry of Culture, Ministry of Economic Development, diplomatic corps and civil society of Kyiv, representatives of Uzbek expatriate community as well as students and those interested in Uzbek history and culture.

It needs to be noted that over the past two years events held by the embassy of Uzbekistan have become distinctive for their color, warm-heartedness and gorgeous concert programs.

The solemn event was opened by Ambassador Extraordinary and Plenipotentiary of the Republic of Uzbekistan Alisher Abdualiev who specified that Nowruz was the most ancient and the most beautiful holiday, the symbol of spring, vivification and joy.

In his speech Uzbek diplomat emphasized that one inimitable distinctive of Nowruz is that it calls for preservation of peace and wellbeing in every home, in every country. On this holiday all offenses should be forgotten, quarrels and wars ceased, concord, cohesion and humanism should reign in society.

Alisher Abdualiev expressed best and kindest wishes to all Ukrainian friends and partners, congratulated ambassadors of foreign countries and representatives of international organizations as well as representatives of Uzbekistan who live in the territory of Ukraine, wished peace, prosperity and welfare to peoples of all countries.

Deputy Minister of Culture of Ukraine Ihor Dmytrovych Likhovyi reciprocated with a speech of his own; he noted that such events make people kinder, make them forget insults and that he once again saw that Uzbekistan was rich in terms of culture and customs. He especially liked the idea of creation of a museum room at the Embassy where national costumes, outfits and decorations made of silk, applied art items by craftsmen from Uzbekistan are exhibited.

Alongside all these, within the framework of the event guests were presented with a booklet especially published by the Embassy, dedicated to touristic potential of the Republic of Karakalpakstan.

Guests of the event also visited a recently opened museum room of the Embassy where they got acquainted with works of art of Uzbek craftsmen in woodcarving, plaster carving, and embroidery: these were wooden stools, tables, an armchair, leather bags and national scarves. Visitors of the exhibition particularly admired high level of skills of Uzbek applied arts craftsmen, especially wood and plaster carving.

Also, experts in culinary art from Association of Cooks of Uzbekistan demonstrated their skills in making national Uzbek dishes.

In the course of events participants of the festivities shared their impressions from taking part in Nowruz celebration.

Director of National Academy of visual Arts and Architecture of Ukraine Andryi Volodymyrovych Chebykin emphasized: “Uzbekistan has always had best things and the country knows how to show achievements. I was particularly touched by national dolls collection in traditional clothes of different regions of Uzbekistan. Despite the fact all outfits exhibited in the display share common features – deep colors, abundance of adornments, luxury, specific to culture of the East, costume of each region possesses own unique distinctives, where every detail has its meaning and preserves history of many centuries”.

Ambassador Extraordinary and Plenipotentiary of Palestine to Ukraine Mohammed Alasaad declared: “The holiday made an indelible impression with its sincerity, warmth and opened hearts of all participants”. He also noted that the initiative of the Embassy of Uzbekistan, Uzbek expatriate community and especially participation of college students in orchestration of such events in Ukraine deserves all kinds of respect because culture dialog between peoples is one of the most efficient mechanisms of developing both bilateral and multilateral relations.