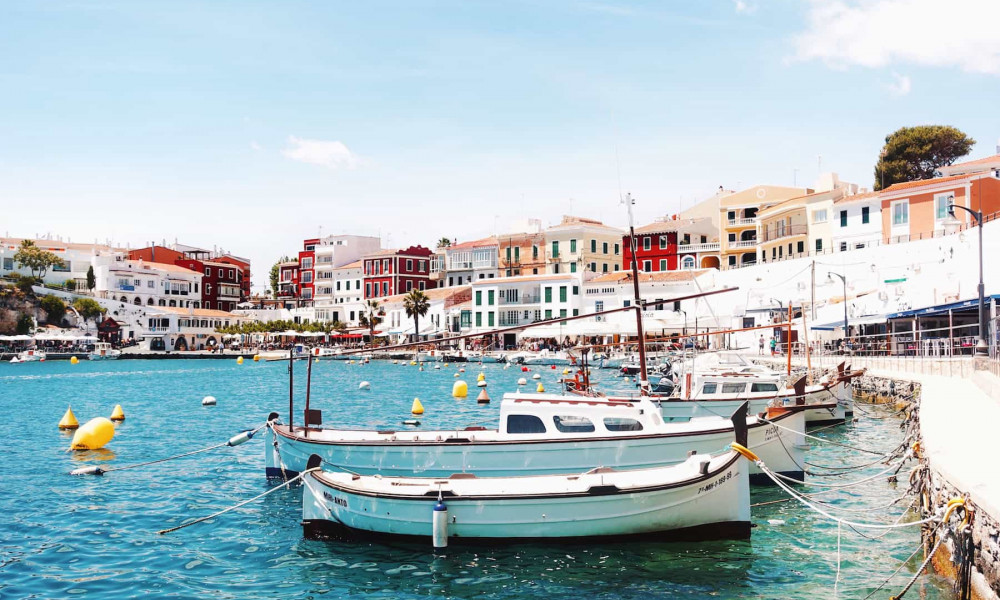 Dwellers of this island whiten their houses like crazy, treat every plant with love and can watch birds of passage for hours. Emerald valleys get shifted with desert landscapes there and precipitous cliffs border with azure and ruby beaches. Minorca is like the most precious stone in the neckless of Balearic Islands.

Minorca is a resort island that hardly many people can afford. Rich history, fortunate geographic location, almost pristine nature, exotic plants, unique fauna, pure coasts and… a sensation of heaven. People go there to get to a different reality.

Once, upon seeing its rocky coast, the Phoenicians directed their ships there. Having sailed closer, they spotted numerous lights on the shore. Upon coming ashore they found nothing that could have radiated that light. And this isn’t Minorca’s only mystery. “Ships of the dead” are scattered around its entire territory. That’s the way huge frustums, their age exceeding the one of Egyptian pyramids, are called. Experts state that peculiar constructions are over three thousand years old. Towers are preserved on the island on which local citizens made sacrifices to their gods. Among prehistoric monuments there are over fifteen hundred stone erections that resemble turned-over boats. These are dwellings of first settlers of Minorca. Caves decorated with ancient paintings are open for visits, too. In some of them museums are equipped. People often do walks around the island. There are no skyscrapers, locals eagerly use bicycles and horses and the nature, virtually untouched by men, cozily joins numerous bays and creeks. All in all there are over a hundred sand beaches on Minorca. At some of them it is possible to seclude oneself and enjoy solitude or to set a romantic night. Others, the ones in resort area, are equipped with all necessary conveniences.

There one can do fishing – upon sailing far from the shore, watch rare birds that stay at the island during long-distance flights. People also come to the island to enjoy opera singing of world’s best performers. International Opera Week is held on Minorca annually to gather dozens of stage stars and their admirers. And this isn’t the only colorful event. Festivals are held almost every month on the island. None of them passes without an equestrian performance. Minorcans have a very special attitude towards horses. These animals have even become the official symbol of the island. For many locals breeding of a herd became a work of life. They pass their knowledge from father to son and eagerly demonstrate rider’s skills during competitions and breathtaking performances. Also, guests of Minorca are generously treated with locally produced cheese and poured gin – its recipe islanders keep a secret.

Mahón is the main city of the island. About thirty thousand people live there. It is located in a quiet harbor, daily dozens of ships, yachts and boats berth there. An international airport is located nearby. Centre of Mahón is pedestrian. Unfortunately, there aren’t too many monuments of architecture in the capital. Pirates attacked the city more than once to destroy it and take citizens of Mahón as slaves. Among monuments that have survived there is church of Santa Maria. It is the highest temple of Minorca. Municipality, museums, jewelry salons, designer boutiques, restaurants and souvenir shops are situated nearby. It is often advised to purchase a pair of leather shoes or a bag at latter ones. Those goods are of highest quality and they are produced by Minorcans.

Those, who have time, go to Ibiza and Mallorca. Motor boats shuttle between islands every day. On them one can also get to mainland – Barcelona, for instance. It is convenient to travel around the island on a rented car. But there is no deal should the one willing to have a ride have received driver’s license less than a year prior. The islanders are also strict with the ones who treat purity and nature carelessly. For a paper thrown on the ground or a culled flower one can pay a large fine. Punishment will also come for smoking in public places and noise during night hours.

Minorca is a pretty young resort, created for those who can pay for comfort and high quality, for those who aren’t after night-time fun and shopping. The island calls own travelers, the ones ready to see the value of certain isolation from fussy Europe, admire its beauty, willing to plunge into its exceptionally clear waters. For them lights of seven lighthouses, located along its entire perimeter, eternally shine on Minorca. They wink friendly to shed light of bright flashes on fairy-tale landscapes.

Palma de Mallorca: The capital of paradise islands
Our today's city is the capital of four islands: Mallorca, Menorca, Ibiza and Formentera. Together they form the Balearic archipelago which is an autonomous community and a province of Spain. Palma de Mallorca is the heart of Balearic Islands that beats in quite different rhythms: both jumping at vibrant beach parties, and rhythmically following play of the Mediterranean waves.

Ambassador of Spain is making his country’s culture more popular
With the support of the Embassy of Spain in Ukraine and personally the Extraordinary and Plenipotentiary Ambassador Sylvia Cortes Martin, cognitive events for demonstrating the cultural diversity and heritage of this country were organized for the residents of the capital.

The Embassy of Spain to Ukraine organized official events in Kyiv
On the 13-th of December in National library of Ukraine for children the ceremony of giving books happened. Afterwards, in the residence the Ambassador Extraordinary and Plenipotentiary of Spain to Ukraine Silvia Cortes Martin organized diplomatic reception.