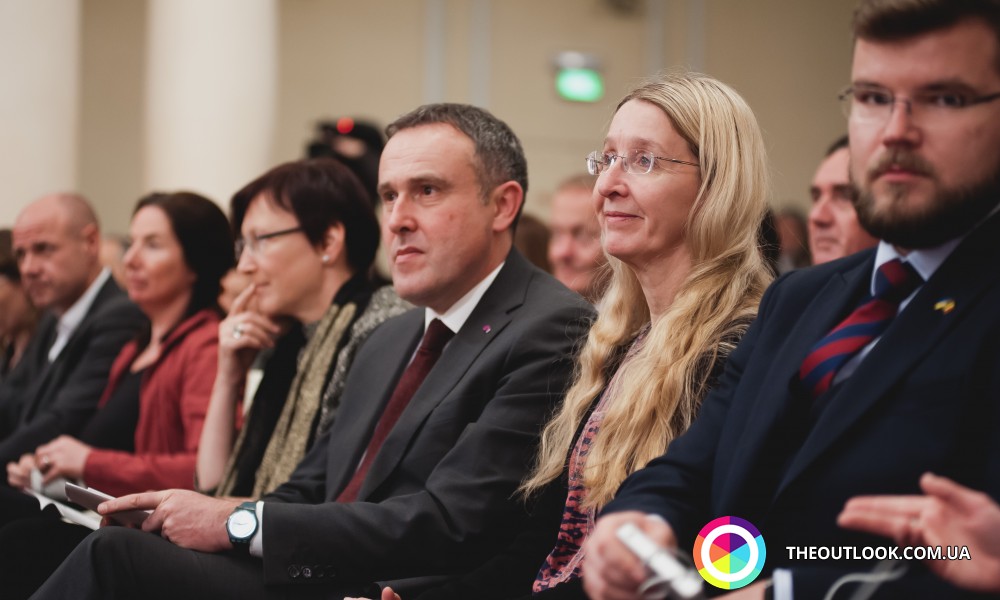 On the 15-th of November, in Kyiv in National Philharmonic of Ukraine the official concert dedicated to the Day of the King of Belgium happened. The event was organized by the Embassy of Kingdom of Belgium to Ukraine and personally Ambassador Extraordinary and Plenipotentiary Luc Jacobs. All the musical pieces in this evening sounded at the performance of Belgium ensemble ‘Het Collectief’ which performed in Ukraine firstly.

So as to express the respect and congratulate the Ambassador in this evening his colleagues came such as the heads of diplomatic missions of Netherlands, Uzbekistan, Pakistan, Spain, France, Israeli, Lithuania, Japan, Algeria, Palestine, Turkey, Portugal, Malaysia, Georgia, Ukrainian politicians, community and mass media.

National holiday Day of King has been celebrated in Belgium since 1866 verily on the 15-th of November. The holiday has been established on the second Belgium king Leopold II. In Ukraine this day is celebrated annually with exclusive concerts with the participation of the interesting musicians of Belgium as the symbol of intercultural sympathetic understanding of people belonging to different nations and peoples, peace and mutual benevolence as well as strengthening of friendship.

The Ambassador Extraordinary and Plenipotentiary of Belgium Kingdom to Ukraine Mr Luc Jacobs stated on this occasion: ‘The autumn for Ukraine, traditionally, is the time of Commemoration. This year in Ukraine the 75-th anniversary of tragedy in Babi Yar is celebrated. It is a very deep wound in the history of Humanity. No doubts, it is warning for the current and futuristic generations. Musical pieces which are to be performed during the concert in ‘King Day’ in National Philharmonics of Ukraine will become somewhat of musical expression of this reflection of the citizens of Europe, first and foremost’.

The terror of the Second World War encouraged many composers to express their social, political and even religious position through Music. That is why the program of this concert is the musical evidence and chronicle of the past events.

For instance, cantata of German composer Hanns Eisler, in performance of the singer Lisbeth Devos is the voice of antifascist resistance in the 1930s. Eisler was one of those few artists who rejected all the attempts to force his art serve Nazi regime and was able to continue struggle at the time of his exile to the United States. In spite of his Czech colleague Ervín Schulhoff whose art was stained by fascists as degenerative one. As the result of it he was sent to the concentration camp Wülzburg being left without chance to live further.

Verily in this period, French composer Olivier Messiaen created his famous ‘Quatuor Pour La Fin Du Temps’ (Quartet at the end of Time) considered as apocalyptic vision of the artist created during his stay in German camp for soldiers in Silesia (1940-41). In this piece the composer tried to recreate his Christian belief and its eternal values using different ways of composition so as to transform the concept of eternity to music.

The musical band ‘Het Collectief’ that for the first time is due to perform in Kyiv and demonstrate pieces of these prominent composers was established in 1998 in Brussels. Its main team includes five musicians who create the unrepeatable sound reached by the combination of the stringed and wind instruments as well as piano.

The performance of music of the begging of XX century became priority in the most courageous recent trends of the modern academic music. Also, musicians successfully make experiments in the combination with the up-to-date music with classic repertoire and even in adaptation of the ancient music to the modern epoch.

Blumenfeld Piano Duo concert in Kyiv. The Ambassador of Belgium: my credo in Ukraine means we play and work together
On the 15-th of November, Belgium celebrates King's Day, taking advantage of the excellent occasion. Ambassador Extraordinary and Plenipotentiary Alex Lennart organized a concert of two virtuosos in the Kiev Philharmonic Hall - the duo Blumenfeld Piano Duo of the world-famous Ukrainian pianist, who lives in Belgium, Dmitry Sukhovienko and Belgian Aaron Weinberg.