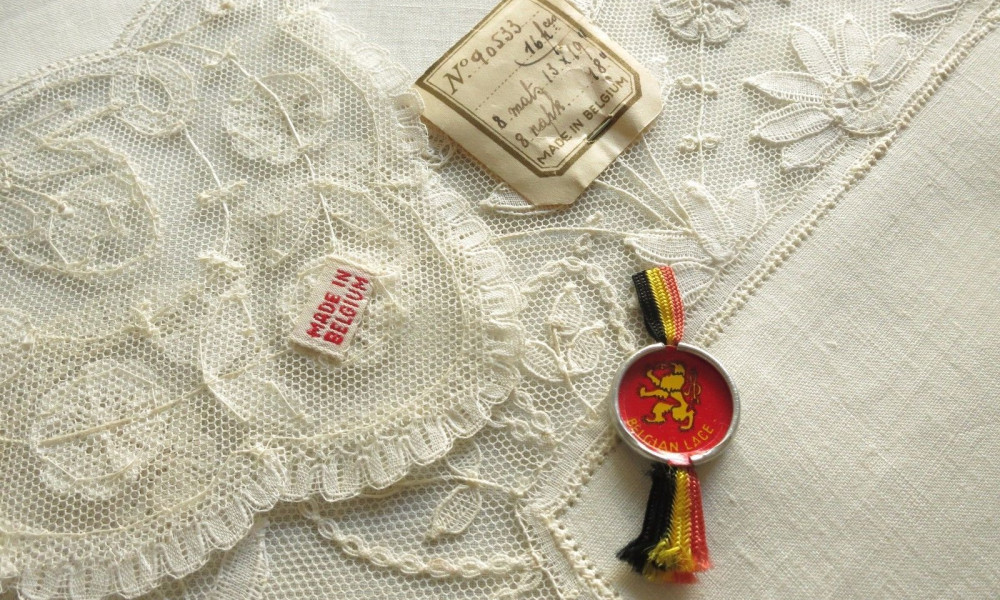 At the sight of Flemish lacework it is hard to shake the feeling that miraculous flowers, artfully braided into a wreath of a pattern, were born from loose sparks that had escaped a magic wand. On the inside of the beauty there are efforts and days of jetsam girls, stolen from life by labyrinth of openwork loops.

Having compelled self-will of the thread to a dream about heaven, promised for humility, skills defied despair and need – to secure victory.

Famous Belgian lace follows Venetian traditions of guipure manufacturing – components of openwork cloth with fanciful ornamentation acquired by means of either sewing or connecting separate fragments of the pattern with hairline ligaments. Distinctive texture of a cloth is achieved due to difference in thickness of core and lacing threads.

Unlike other countries, in Belgium lace knitting has never been an amusement for bored girls from noble families. Daughters of poor men took to spindles that served as the only source of income for them; establishment of exquisite Bruges style was facilitated by bishop Van Susteren who suggested creation of handcrafts to provide orphans and dowerless girls with legal income.

Read also: What do they eat: Belgium

Home trade turning of into a profession has outlined broad horizons for development of techniques and methods of lace knitting. Early items that date back to 16th century were of mimical nature, imitating Italian geometric patterns carefully, however by mid-following-century three authentic styles emerged in works of Belgian lace-makers: Barbant, Brussels and Bruges.

Magnificent era of baroque wallowed in playful waves of Barbant lace. Almost every field in Barbant was seeded with linen to obtain soft elastic fibers of delicate pink shade. Having absorbed moisture, linen thread would become flexible and supple therefore craftswomen used to work in damp basements in uneven light of candles. Can it be this quaint dance of shadows on unhomely stone walls where dressy motives of Barbant lace take roots – squiggly leaves of acanthus and stylized flowers, enrolled in round dances of ligature scripts?

Cellated grid made of hexagonal loops served as a background for the design, two sides of those loops were located in parallel to the basis formed by intertwinement of four remaining sides. Sometimes lacy cloth was decorated with “points d’espirit” – miniature decorative elements assembled of Richelieu loops.Photo everydaylaura.com

Before the very end of 17th century overloaded baroque splendor was shifted by flittering gracefulness of rococo. On frock coats of fashionistas from Versailles weightless Binche lace got settled like an airy web – a true treasure for romantic stories and witty allegories. Woven basis was replaced with crochet pique decorated with in-relief pattern of complete and intermittent loops made on spindlers. An interesting feature of Binche guipure was snow-white background pattern borrowed from ancient Flanders lace.

In the age of Enlightenment attention of the public switched to Brussels net lace. Large realistic flowers, wreaths, monograms and garlands that formed design were produced separately this time to be connected with thin fine-mashed net. Translucent veil woven from mysteries, hints and enigmas resounded precisely with adventurous spirit of the Fete galante. In aristocratic circles Angleterre plaiting was highly appreciated, net curtain took turn with ligaments and contours of flowers and branches were emphasized with soft relief.

Burghers’ class preferred less complicated guipures from Antwerp or Mechlin lace from Mechelen based on thick patterned net. Antwerp knitting can be easily told by repeats with flowers in pots and vases belted with ribbons and Mechelen lace acquires pronounced relief due to trimming of the pattern with voluminous shiny thread.
Photo dissolve.com

Read also: We were there: Bruges

Several currents can be specified within the framework of Bruges style. Composition of A La Russe guipures is built around continual whirling ribbon executed with complete loops decorated with leaves and spikes. And favorite lace of Henrietta Maria, nee archduchess of Austria, did perfectly without any bases: fragments of Duchesse plaiting were connected with inkle ligaments integrated into traditional flowery pattern. Light Rosaline lace actively uses repeat of five openwork petals located in front of each other. The pattern has basic braided thread; free space gets filled with small refined leaves. Items created with central positioning of crocheted in-relief element, called pearls of Rosaline, are appreciated most. Since than souvenir rows at Grand Place are almost literally swamped with lacy napkins and towels however cardboard patterns don’t inspire experienced European tourists. In the centre of lace manufacturing, Bruges, one can find curious creations of modern craftsmen however synthetic fibers have no ingratiating tenderness of Barbant linen whatsoever. True Belgian lace of ancient work is probably preserved only at antique stores to have five-digit price tags on it. Genuine beauty still steers clear of grass roots…