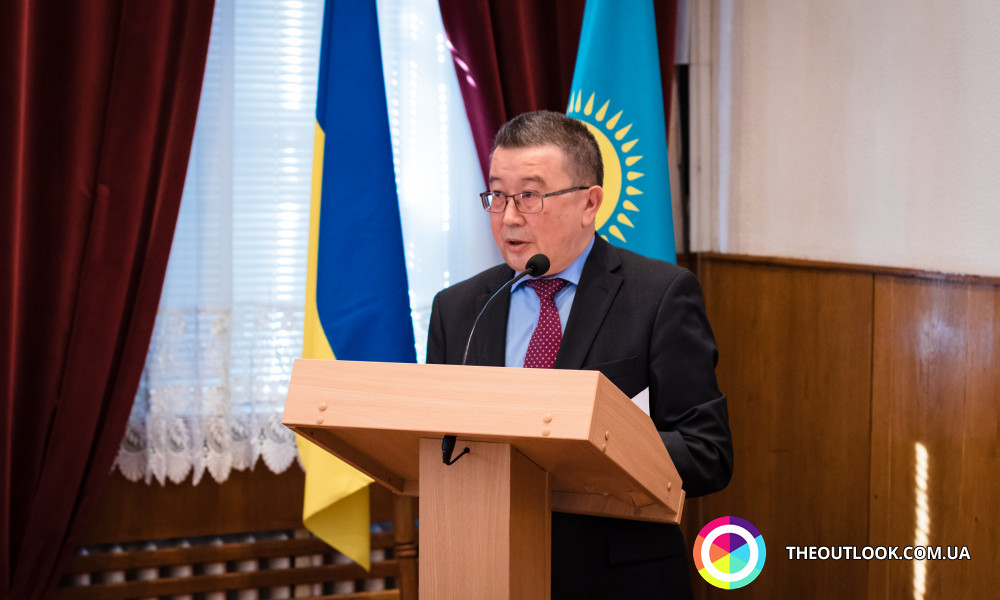 On the 27-th of September, the Ambassador Extraordinary and Plenipotentiary of Republic Kazakhstan to Ukraine Samat Ordabaev organized a ‘round table’ in Kyiv. The event was dedicated to the 25-th anniversary of diplomatic relations between our countries. There were heads of diplomatic missions, people’s deputies of Verkhovna Rada, executives of authorities of Ukraine, the representatives of creative and scientific regions, business communities, as mass media.

In the course of event happened in Small Hall of the Big Conference Hall of National Science Academy of Ukraine, the head of diplomatic mission told about the politic and economic reformations that started this spring with the efforts of President of Kazakhstan Nursultan Nazarbaev.

‘The President voluntarily initiated the refusal from the range of his duties. The significant part of duties of the president on the regulation of social and economic processes was given to the authority and other executive organs. The head of stated retained only strategic functions’, remarked Mr Ambassador. In the meantime, he stressed that the country is still president republic with quite a strong vertical of power which just became more balanced.

The second focus of changes is the modification of economic preferences, choice of directions basing on the digital technologies, such as 3D-printing, online-trade, Internet-banking, digital services, etc. The special accent will be given to the small business.

As well, Mr Ambassador claimed that all these problems could be solved under the condition of starting a new generation of citizens with the advanced mind. That’s why it was the beginning of modernizing social awareness because the new generation should be competitive, pragmatic, but at the same time save its identity and open-mindedness.

There is a compulsory point about the enforcement of the works and investments to save the originality of Kazakh nation and stimulate the funding from the side of successful citizens.

Also, Mr Ordabaev emphasized the prospects of diplomatic relations and economic collaboration between Kazakhstan and Ukraine, told about the results of 25-year work in different areas and expressed hope in further successful implementation of the mutual projects.

As well, the speeches were performed by Pirozhkov S.I., Vice President of National Science Academy of Ukraine, the head of group of Verkhovna Rada of Ukraine on interparliament connections with Republic Kazakhstan Demchack R. E., the deputy Minister of education and science of Ukraine Greba R. V., Vice President of Ukrainian Chamber of Commerce and Industry Svistil S. A., etc. All the participants highly estimated the ambitious purposes of Kazakhstan and emphasized the reformations that have been already implemented.