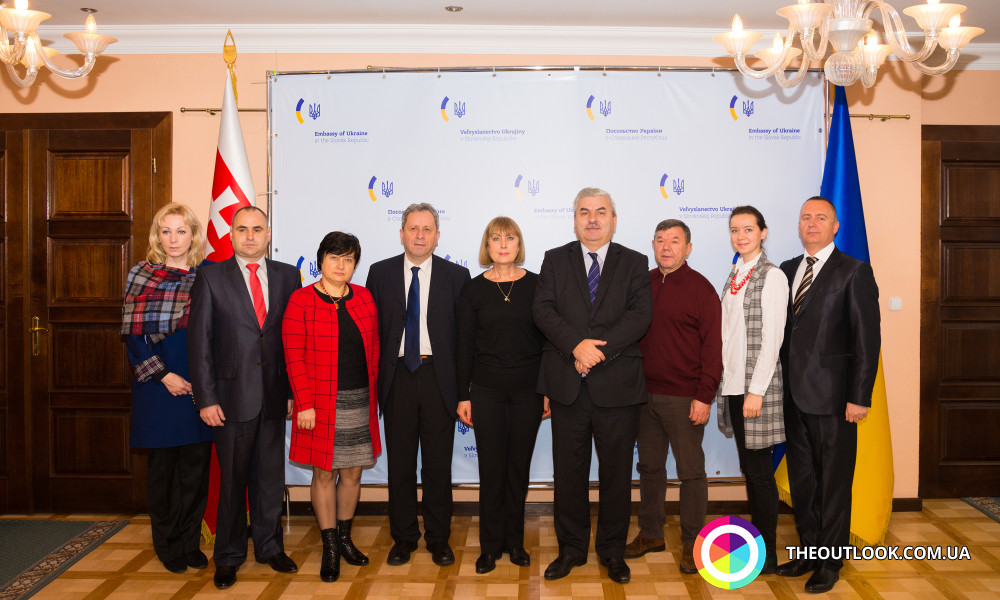 The Directorate-General for Rendering Services to Diplomatic Mission and the Scientific Society of History of Diplomacy and International Relations with the support of the Ministry of Foreign Affairs of Ukraine, the Embassies of Ukraine in Austria, Slovakia and Hungary arranged a series of events on the occasion of the 100th anniversary of Ukrainian diplomacy.

From the Slovak side, the discussion was joined by Hryhorii Mesezhnykov, political scientist; Yurai Marushchak, Director of the Institute of Political Sciences of the Slovak Academy of Sciences; Pavol Demes, former Minister of Foreign Affairs of the Slovak Republic; Silvestr Minarovych, Head of the Association of Veterans of the Diplomatic Service of the SR; Emanuel Rehak, member of the Association of Veterans of Slovak Diplomacy; Yurai Hrashko, Professor, academician, ex-deputy of the Slovak Parliament, former Minister of Environment of the Slovak Republic, former Extraordinary and Plenipotentiary of Slovakia to Switzerland; Michal Šmigel, Associate Professor of the Faculty of Philosophy of the Matej Bel University in Banská Bystrica; Liudmyla Verbytska, Chairman of the Board of the Ukrainian-Slovak Initiative; Mykola Mushynka, academician of the NAS of Ukraine, Head of the T. Shevchenko Scientific Society; Anton Novak, Head of the Slovak-Ukrainian Society; Ivan Yatskanin, writer, publicist, Head of the Union of Ukrainian Writers in Slovakia; Vasil Datsei, Slovak and Ukrainian writer; as well as students and journalists. The Ambassador Extraordinary and Plenipotentiary of Ukraine to Slovakia Yurii Mushka congratulated the participants of the event and reminded about the history of bilateral relations of the two countries, noting the importance of such meetings for studying the foundations and defining the prospects of cooperation. The Ukrainian delegation and representatives of the embassy paid tribute to Ivan Kraskovskyi − a prominent figure of the Ukrainian liberation movement, representative of the UPR abroad, at his grave in Bratislava. The Ukrainian delegates also prepared an exhibition of archival documents to demonstrate an official basis for the establishment of diplomatic relations between Ukraine and Slovakia.

On November 15, the Ukrainian-Austrian scientific conference “Ukraine and Austria – hundred years ago” dedicated to the 100th anniversary of the Ukrainian diplomatic service was held at the University of Vienna. Organizers of the event were the Ministry of Foreign Affairs of Ukraine, the Embassy of Ukraine in Austria, the Austrian-Ukrainian Society, the University of Vienna, the Directorate-General for Rendering Services to Diplomatic Missions and the Scientific Society of History of Diplomacy and International Relations. The event was attended by Ukrainian and Austrian historians, scholars, political scientists, students, members of the Ukrainian community. The speakers were professors: Iryna Matiash, Ihor Datskiv, Oleh Pavlyshyn and PhDs: Andreas Kappeler, Christoph Augustinovich and Kerstin Jobst (Vienna). Pavlo Kryvonos, Director-General of GDIP, delivered a welcome speech on the importance of celebrating the institutionalization of Ukrainian diplomacy in Austria. The scholars outlined in their speeches the period of the establishment of the Ukrainian statehood in 1917-1920 in the context of international relations of the UPR and ZUNR (West Ukrainian People’s Republic) as well as the first steps towards the establishment of the Ukrainian diplomatic service. There were presented archival documents describing activities of Ukrainian diplomatic missions in Vienna 100 years ago.

On November 16, the events commemorating the 100th anniversary of Ukrainian diplomacy and the anniversary of the Revolution of Dignity continued to be held in Budapest. There was a joint laying of flowers to the memorial plaque, where the Extraordinary Diplomatic Mission of the UPR in Budapest in 1918 was located, as well as to the monument to Taras Shevchenko.

The event was organized by the Embassy of Ukraine in Hungary with the support of the Ukrainian community and the above-mentioned members of the delegation.

The Ambassador Extraordinary and Plenipotentiary of Ukraine to Hungary Liubov Nepop marked in her welcome address that today Ukrainian diplomacy defends interests of the state against the backdrop of Russian aggression and puts every effort to ensure the fulfilment of ideas of the Revolution of Dignity and the inclusion of our state to the European civilization space as its integral part. This is our common task. To achieve it, we need to keep being united and rely on the solidarity of our partners, among which Hungary also plays an important role in this regard.