Under the South Cross. Queenstown 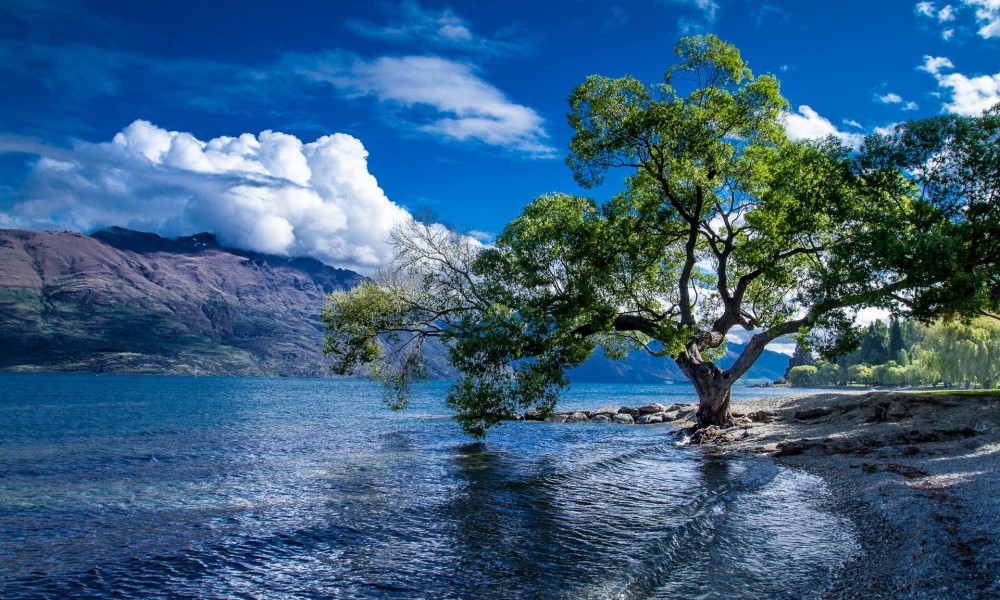 Residents of Queenstown, like all New Zealanders, are among the first on the planet to meet the dawn. There are no children's homes, homeless animals. People are resistant to cold, so much so that at zero degrees go in T-shirts. Each of them has an average of nine sheep, and in nature there are practically no such dangers as mosquitoes and snakes.

The city is on the South Island of New Zealand, surrounded by mountains and lakes. There are many trees, mountain rivers and very fresh air. In Queenstown itself there are two casinos, several hundred restaurants and a lot of hotels on any taste. But more often in this city they go those who like extreme. In winter, they go skiing, jumping on rope anchorages from steep rocks, rolling on bicycles on steep and dangerous mountain paths, chasing race on the canyons among the ravines, climbing rocks, jumping with a parachute. The local people say that jumping was invented here.

And those who do not believe are strongly advised to jump from the bridge from a height of forty-three meters with an elastic band tied to the feet. There are many such places in

In fact, this is not a big city. There are no skyscrapers, large shopping centers. Vineyards and ancient mining settlements are closely adjoining to it. And some streets remind of narrow rural roads. Once upon a time there was a Maori settlement. However, by the time the white colonists appeared, the Aborigines for some reason had left these places. In the middle of the nineteenth century these lands were chosen by sheep breeders. A little later, gold was found here. After that, the population of the settlement began to grow dramatically. Built in the English style, it positions itself as a tourist city, suitable more for the summer season. After all, most homes do not have insulation. Thus, in the cold season in these houses can be quite cool and humid. Almost everyone who gets to Queenstown, is eager to eat burgers, which are sold only here. Bloggers around the world call them the best ones, and guides include their tasting on the tourist itinerary. They are prepared and sold in a small eatery, which is called Fergburger. There are always huge queues. The taste is not arguable; however, the entrepreneurial spirit of the owners of Fergburger is respected. After all, the revenue of this tavern is almost twenty million US dollars a year. They sell an average of 3 burgers per minute at a price of 10-15 dollars for one. In a year there are one million three hundred thousand burgers. After these figures, it is difficult to call them the best. How did it happen? It’s quite simple. Queenstown has always been crowded, and it's hard to eat at night. And then one local resident decided to open a small point where you could have a snack at any time of the day, without pushing among the numerous visitors to bars. Fergburger began working from eight to five in the morning, almost around the clock. Very soon this place became popular among gay companies; then among the visitors of numerous bars, it became a tradition to reinforce in the middle of the night with a hearty burger, so as not to finally, at the same time, be ventilated near Fergburger.

Sometimes on the streets of the city you can meet people dressed in Maori costumes. But, more often it's artists who offer tourists to look at the ancient warlike dances of this people. In their evening shows they teach those who wish to ritual dances, greet their noses and treat them with traditional dishes for the tribe.

All the inhabitants of Queenstown are proud with their kiwi park. Only here in the reserve there are about thirty species of this bird. Kiwi is considered to be the national symbol of

Near the city there is a botanical garden with rare plants. Some of them were planted with the first measure of Queenstown. In the garden you can leave the frisbee and sunbathe. On the territory of Queenstown there are several beaches, but they are wild and not equipped with sun loungers, no one offers them Margarita or hot corn, However, on hot days there are always a lot of young people. There are also some of the festivals.

It seems that the New Year in