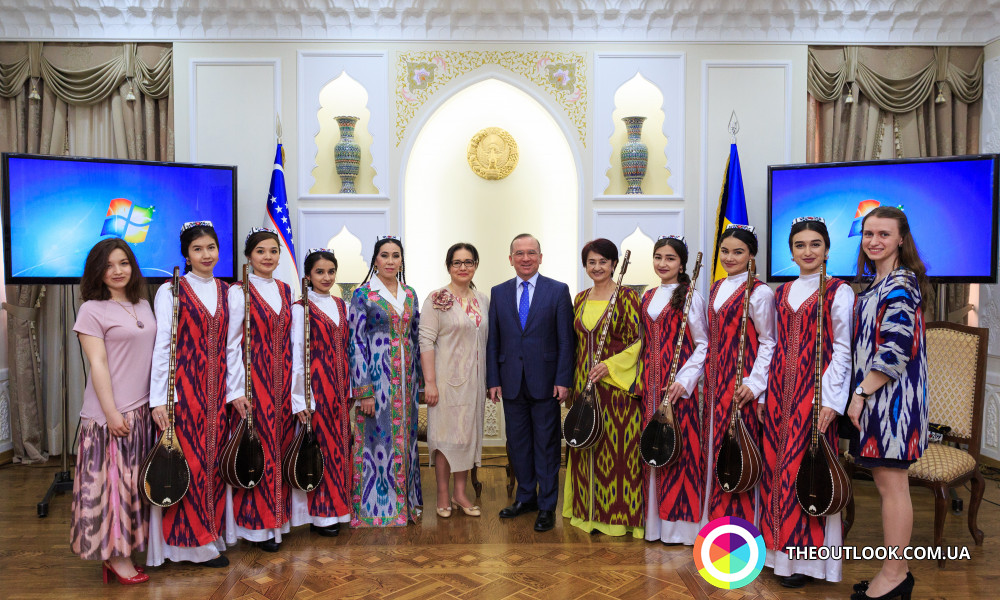 The Embassy of Uzbekistan in Ukraine and Ambassador's Spouses Club Kiev welcomed the Ukrainian public and foreign guests with the national art of the Uzbek people, traditions and principles of creating pieces of art made by the folk artists and artists from Uzbekistan.

The event, organized by the Embassy of Uzbekistan in Ukraine and the Ambassador's Spouses Club Kiev, was attended by the spouses of heads of diplomatic missions of foreign countries, employees of international organizations and journalists. Information materials reflecting the flourishing cultural and travel potential of Uzbekistan were also distributed among them.

Guests were presented with a large exposition of national costumes and fabrics made according to old sketches and traditions. The spouse of the Ambassador Extraordinary and Plenipotentiary of the Republic of Uzbekistan to Ukraine Gulnoza Abdualieva tried to demonstrate the culture and creativity of the Uzbek people as much as possible. At the event, the guests were introduced to the Uzbek print of the fabric "ICAT", as well as the vocal art "MAKOM", which were included in UNESCO's list of intangible cultural heritage in December 2017.

As Ms. Gulnoza said, ICAT might be compared with jazz improvisation, when new themes are woven into the background of famous melodies, sometimes changing the main outline of the work beyond recognition, filling it with other colors. Icat is a stylish pattern of one master with a traced geometry to him alone, where lines and colors are intertwined in a fanciful manner, giving rise to the intricacies of images and figures. You will never find two identical patterns, because each canvas is unique, made and painted by hand and sometimes even the master himself does not know the final result of his work. She notes that Icat is sometimes called by another name - khan-atlas, adras, Bukhara shoi. During the presentation, Ms. Gulnoza talked about the beautiful legend of the creation of khan-atlas. According to some legend, one of the rulers of Margilan once decided to marry for the fifth time. He saw the young daughter of weaver, fell in love and decided that she would have been the fifth wife. The weaver was disappointed to hear the intention of the khan, so, he came to the palace and asked not to touch his daughter. Then Khan said he would have given up his intention only if the master created something more beautiful than his daughter by the next morning.

The weaver could not eat and sleep all night, at dawn he went to the stream. Being sad, he sat down in meditation on the bank of the stream, looked into it, and it reflected a rainbow. The artist burst into tears and when tears fell in the stream, the rainbow broke up rippling and presented him with a wonderful drawing. He understood what his salvation was, and wove an extraordinary cloth in the image of what he had seen - light as a cloud, cool as mountain air, and reflecting all the colors of the rainbow.

In the morning, the master brought his creation to the khan. He was shocked by the beauty of the fabric and ordered to call her "khan-atlas" ("khan silk"), and the daughter of the weaver gave his wife to his beloved son. As Mrs. Abdualieva's explained, in the modern world the pattern "Icat" is extremely popular as it is actively used by manufacturers of textiles, wallpaper, porcelain, interior designers and fashion designers. "The Uzbek print" and national motifs are widely used on world podiums. Brightness, ethnicity and liveliness of national Uzbek fabrics conquered and inspired designers of clothing and interior not only in Uzbekistan but also in the world, and marked the beginning of the 21st century with the heyday of flowering. The Uzbek ornament is a trend-setter of the collections of Louis Vuitton and Christian Dior, Etro and other world brands that used the "Uzbek print" in their collections.

Along with the works of Uzbek masters, during the exhibition visitors had an opportunity to get acquainted with the work of a weaving loom and porcelain utensils, which also had drawings from the Uzbek print "Icat".

The wife of the Ambassador of Uzbekistan demonstrated those present with the MAKOM genre, which is popular in many countries of the East such as Turkey, Azerbaijan, Tajikistan,etc. However, as she mentioned, the Uzbek MAKO is slightly different in its manner of execution.

An impressive impression on the audience was made by People's Artist of Uzbekistan Munozhat Yulchieva who performed poppy in the Uzbek classical music genre, which gained worldwide fame as a performer of makoms.
Storm enthusiasm among the guests caused the appearance of the ensemble of dutarists "Istiqlilim Kizlari" directed by Ruzi Khodjaeva, who masterly performed national melodies and songs.

At the end of the event, Mrs. Gulnoza invited the guests to take the famous Uzbek pilaf, samsa, fried dumplings and other dishes of national cuisine.