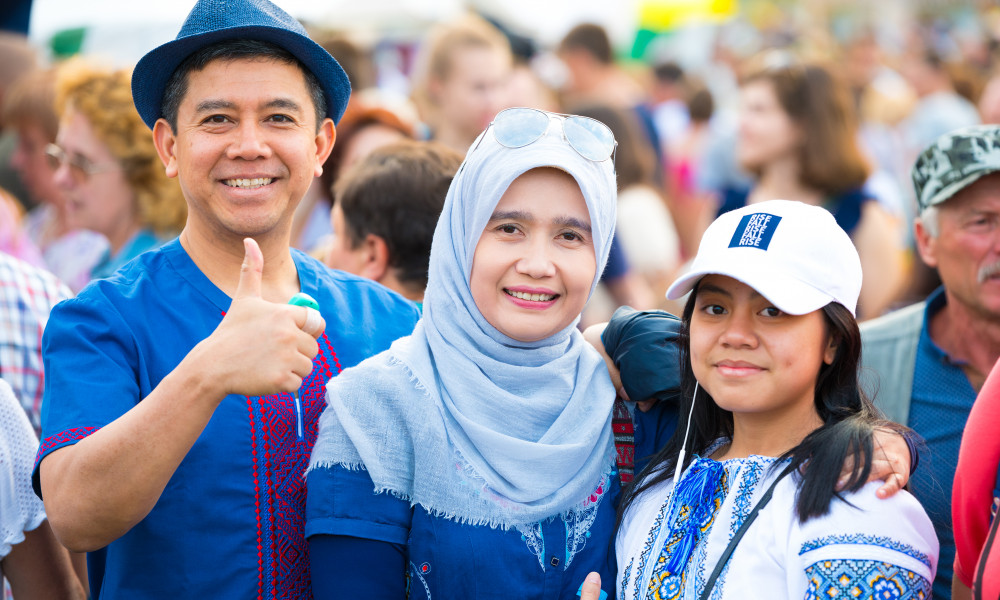 The village of Nemyryntsi of the Ruzhynskyi district in Zhytomyr Oblast hosted the All-Ukrainian Festival of Traditional Culture “Kupalski Rosy”.Kupalski Rosy is a festival visited by guests not only from Zhytomyr Oblast, but also from different parts of Ukraine and the world. Organizer of the celebration is Pavlo Zhebrivskyi, Ukrainian politician and his sister Filia Zhebrivska.
60 guests from 25 foreign countries joined the event. Notably, diplomats of foreign countries, representatives of international organizations accredited in Ukraine: Afghanistan, the Socialist Republic of Vietnam, the Hellenic Republic, the Republic of Estonia, the Republic of Indonesia, the Republic of Iraq, the Kyrgyz Republic, Palestine, the Republic of Tajikistan, the Republic of Uzbekistan and GUAM; officials, including Hennadii Zubko, Vice Prime Minister — Minister of Regional Development; representatives of the scientific community, NGOs and the media.
The festival has a longstanding history and this year celebrates its 12 anniversary. The celebration program involved an exhibition of blacksmith and pottery crafts, concert, theatrical performance and many other captivating events.
It is worth mentioning that the celebration started with a grand opening of the new park “Yan” dedicated to the centenary of the birth of Yan Pavlovych Zhebrivskyi. The guests enjoyed a tour around Kupala Park, strolled across the newly created Yan Park and Yanina embankment, learned about the history of their founding and the symbolism of their names.
Later in the evening, the visitors of the event were shown the Magic of Kupala Night accompanied by traditional festive ceremonies.
The concert program included also performances of amateur and folk artistic groups from Zhytomyr region.
Annually the Kupalski Rosy festival welcomes artisans of folk crafts and artists from all throughout Ukraine to arrange an exhibition and sale of their works. Skilled mistresses from all over the country always get ready for the holiday in advance: they select special recipes to prepare the most delicious dishes for guests.
The participants of the feast had an opportunity to observe pre-Christian traditions of Ukrainians reviving and to get involved in performing ceremonial songs, dances, wreaths divination, jumping over the bonfire as well as watching the fire- and air show. Public festivities ended in early morning.
Altai Efendiev, Secretary General of GUAM, shared his impressions:
"This is my first time visiting such a festival. Unfortunately, I have not known about the traditions of his celebration before. For me, such an event is a true finding. It symbolises the unity of a human with nature, since flowers that create a wonderful atmosphere play an important role in these rites. I have not had the slightest clue that this holiday is so popular in Ukraine. Earlier I thought it was religious. Now I realize it is a traditional celebration with centuries-old pagan history that is closely related to nature. My wife, son and I have purposely arrived in advance in order to see the opening ceremony. We want to leave more impressions about this event, learn about subtleties of the celebration and people’s attitude towards it. We intend to stay until dawn."
Автор галереи: GDIP
Вам это будет интересно: