Ottawa is the capital of... 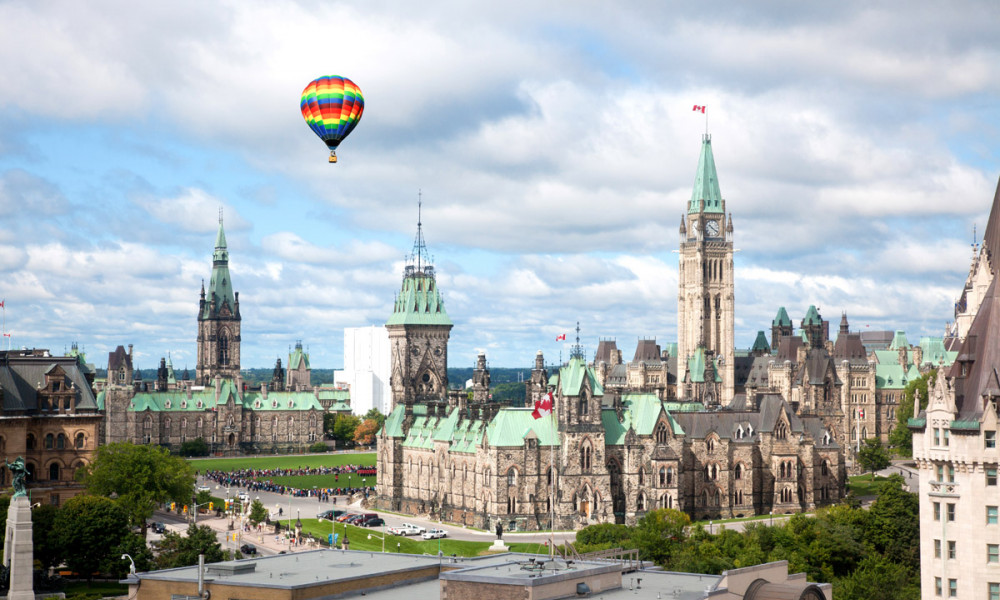 Canada is not only a very beautiful and picturesque country but also one of the most economically developed states on the planet. Since many local cities are well known, foreigners are often confused: Which city is the capital of Canada? Toronto? Vancouver? Or maybe Montreal? OUTLOOK knows not only the answer to this question, but also much more, therefore we would like to tell you about Ottawa, the capital of Canada.

Historians agree that Ottawa, located on the north bank of the river of the same name, along the border between the most important Canadian provinces of Ontario and Quebec, became a compromise capital in the middle of the 19th century. And all because this territory was equidistant from both English-speaking Canada and French-speaking. Therefore, in order for the whole country to develop evenly, it was decided to create here a geographically convenient administrative center, a kind of administrative heart. And even today, after traveling through Canadian megalopolises with their skyscrapers, underground cities and going through the roof of urbanism, getting to Ottawa, exhale a little and feel that you can breathe freely here, almost as if somewhere on the periphery. Although this is in many ways a deceptive impression, since the capital is also a very large and highly developed city with a million inhabitants. Most likely, the reason for this false provinciality is in a somewhat more measured way of life and the vast expanses of water in the vicinity - here is the river, and the lake, and the famous Rideau Canal. Add here another seventy city parks, the absence of traffic jams, a pleasant dimension and get the perfect city of the 21st century - tech and at the same time immersed in greenery and freshness. Ottawa is a leader in living standards even among wealthy Canadian cities, and this is not at all achieved by the fact that it is the capital and all cash flows are here. Canadian decentralization - is something that is studied at the universities. The main city lives well not because it is the main city, but because it is the brain center of the state and is able to provide for itself. Almost a third of local residents are people with higher education, so Ottawa does not feel a lack of intelligence and creativity. Start-ups, high technologies, advanced production, international projects are all important budget items. Thanks to all this, the average family in Ottawa earns about 90 thousand dollars a year which is quite a lot even for a city with very high prices for everything.

See also: Canberra is the capital of...

The largest employer here is the state - the federal government willingly attracts not only experienced employees, but also young people, so local social institutions are extremely modern, mobile and do not lag behind the leading trends, rather, they set themselves. In addition to well-paid work for the state, Ottawa offers its residents jobs in a local hospital, university and private corporations, among which transport giant OC Transpo and telecommunications giant Bell Canada are particularly notable. What else is interesting and unusual is agriculture that makes a great importance for the municipality. Moreover, this city is the only capital in the world, in the center of which there is a working farm - the central experimental one. Relatively favorable compared to other parts of the country, the climate and the natural conditions preserved by man allow local people to engage in farming in the metropolis which has been called the “Northern Silicon Valley” for more than twenty years, because important players of the IT sector, hiring specialists from all over the world, have appeared here. In many ways, therefore, the population of the city is visually very young - today, walking around Ottawa, it seems that this is a city of youth. Right now, high-tech companies, in terms of job creation, are confidently replacing trading firms, although buy-and-sell method has historically been of great importance to the city. Ottawa, which this year celebrates its 150th anniversary, today, of course, is one of the most advanced and convenient cities for the life of the planet, confidently looking to the future. It is also attractive for tourism, because, despite the relatively young age, it is easy to spend a week there, finding something interesting every day. In addition to the majestic parks, colorful river banks and the impressive Rideau Canal, the capital of Canada can offer its guests architectural monuments that blend British and French traditions, art objects, shopping malls, modern museums and fantastic restaurants with eco-friendly products (don't forget about rural household). Local residents are actively involved in the life of the city, so every year there are all new festivals, events, as a result, more and more travelers come to Ottawa in order not only to take a rest from Toronto and Montreal, but also just to see another Canada, a little bit more “Canadian” ".

Cairo is the capital of...
Resorts of the All Inclusive type, pyramids and mummies - that's probably full list that comes to mind when talking about Egypt. Meanwhile, it is one of the most ancient states in the world, and its capital Cairo is the largest city of the Middle East and Africa, with a population of 19 million people, it is a metropolis that rich in historic finery and glass skyscrapers, garbage dumps and expensive shops, a glut of wealth and blatant poverty. Today we will tell you about diverse and unique Cairo.

Maple Syrup. What is it and how to eat it?
Alongside fast food, cola and corn flakes with milk, another product that is obsessively mentioned in almost every American movie is maple syrup. Pancakes, flapjacks, muffins and toasts are ‘dressed’ with it as well as by and large everything that is made of flour. It appeared on shelves of European supermarkets very recently to promptly bewilder customers eager to try formerly inaccessible dishes with honey-and-woody taste that they didn’t know how to cook.