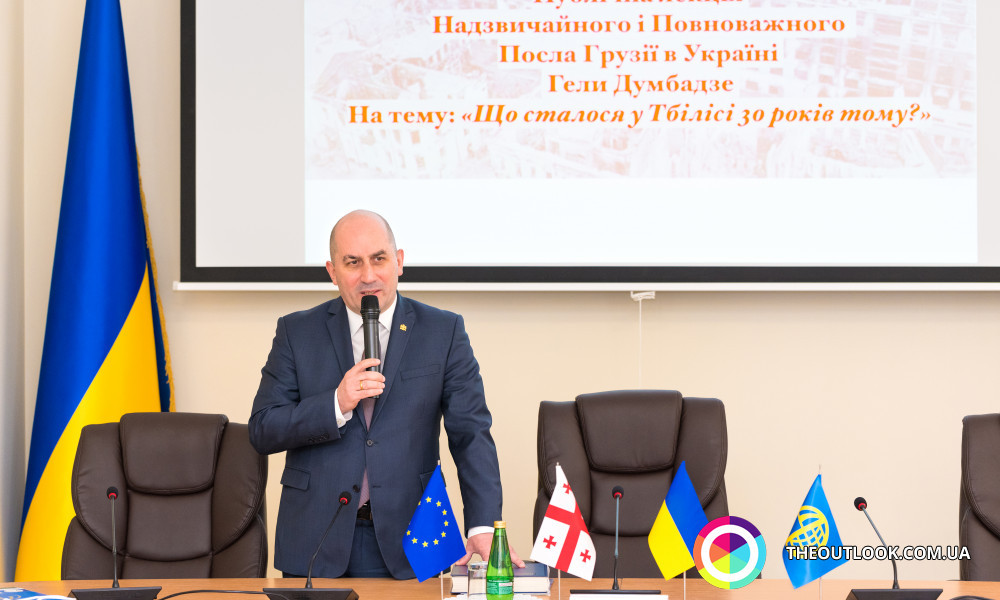 On Wednesday, April 10, 2019, a public lecture by the Ambassador Extraordinary and Plenipotentiary of Georgia to Ukraine, Permanent Representative for GUAM - Gela Dumbadze, was held at GDIP Media Center of the Directorate-General for Rendering Services to Diplomatic Missions. The lecture was devoted to the events that took place in Georgia 30 years ago, April 7-9, 1989.

It is known that the "Tbilisi massacre or Tbilisi tragedy" historians call the dispersal by the Soviet troops of the anti-Soviet peaceful demonstration in the city of Tbilisi, which has led to numerous casualties among the civilian population. This tragedy has accelerated withdrawal of Georgia from the Soviet Union. Launching the lecture, Mr. Ambassador, who was a direct participant in the events, described the chronology of that tragic day and called the main demands of the demonstrators: abolish the autonomy of Abkhazia, provide more independence from Moscow and provide the latest interference in the internal affairs of the country. «The reason for the rallies began was a decision of one of the villages of Abkhazia to join the RSFSR - opposition representatives accused Moscow of incitement to separatism. The protest movement was led by Zviad Gamsakhurdia, Irakli Tsereteli and others. Later, the slogans to stop separatism were also joined by appeals against Soviet power in Georgia and in support of Georgia's independence ", - said Mr. Ambassador.

As witness and participant of events Gela Dumbadze underlined, that many thousands of people gathering in the center of Tbilisi was peaceful and there were no cases of violence or any attempt to seize power. Despite this, on April 7-8, several military units of the armed forces of the USSR were sent to Tbilisi, which executed the order and dispersed peaceful protesters. During the intervention of the troops, 19 people were killed, 16 of them - young women. Most of the victims died from the crush, because under the onslaught of troops the crowd moved from the square. A significant number of people - more than four thousand - have been injured by gas and hit by sapper blades.

During the lecture a documentary about those events was shown and as a sign of respect for the dead was read out their names and honored the memory of the fallen with a minute of silence. It should be noted that since that day, on April 9, Georgia was proclaimed the Day of National Unity, which is celebrated annually.

The lecture was attended by Pavlo Krivonos, Director General of the State Enterprise «GDIP», Volodymyr Khandogiy, President of the Association for Foreign Policy, Irina Matiash, head of the "Scientific Society of History of Diplomacy and International Relations», representatives of diplomatic agencies, public and media.

In conclusion, the guests put questions to Mr. Ambassador and thanked him for his active civic stance, the comprehensive support of the Ukrainian people and the positive development of the Ukrainian-Georgian relations. Pavlo Krivonos presented the book "Consular Service of Ukraine», and Irina Matiash handed the certificate of Honorary Professor of the Scientific Society of History of Diplomacy and International Relations.