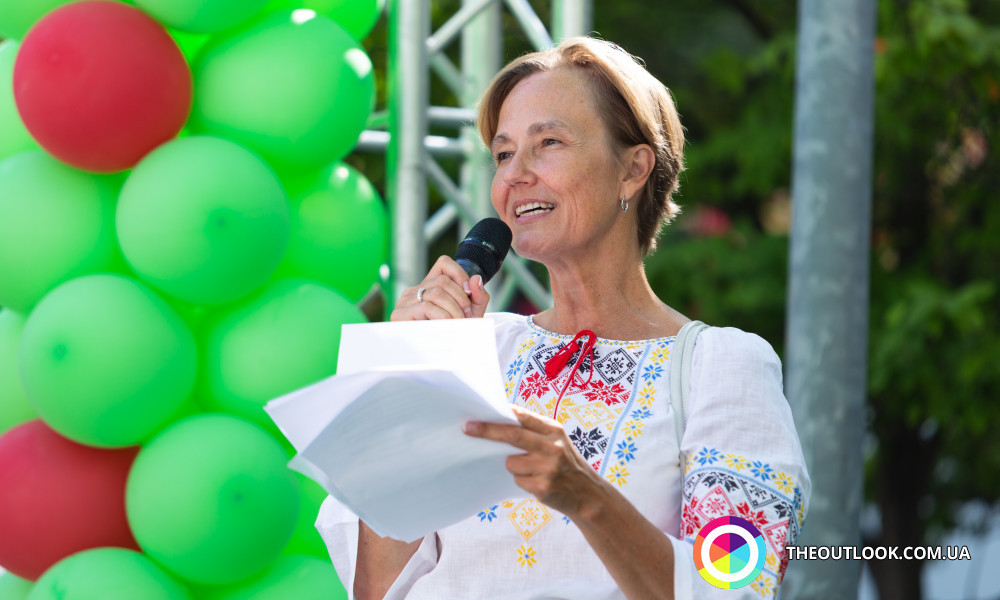 The Embassy of the Federal Republic of Germany for the sixth time invites everyone to visit the German Garden event every summer - a Doors Open Day when diplomats meet in their office and on the territory of the embassy with the the residents of Kyiv.

The purpose of such meetings is to acquaint the public with the activities of the German Embassy in Ukraine and to communicate with representatives of German intermediary organizations.

Representatives of German organizations and foundations made stands with their own information materials, exhibitions and games competitions. German School and German Kindergarten, Goethe Institut in Ukraine, German Academic Exchange Service DAAD, German-Ukrainian Chamber of Commerce, Deutsche Gesellschaft für Internationale Zusammenarbeit (GIZ) and Kreditanstalt für Wiederaufbau (KfW), Office of the Free State of Bavaria, as well as 3 German political funds were the participants of the event. There were a playground for craftsmanship and a food court with German dishes. The German Embassy offered a quiz about Germany to the visitors and played out three surprise boxes.

The ensemble "Deutsche Kwelle" (German Spring) and Postman - a Ukrainian musician, singer and composer were responsible for the entertaining program. 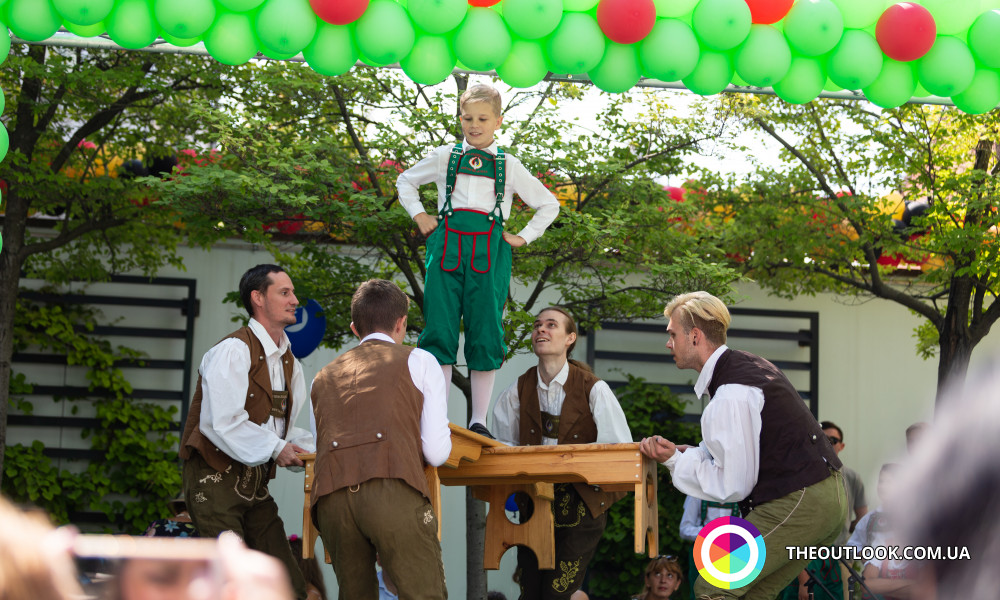 Ambassador Extraordinary and Plenipotentiary of Germany to Ukraine Anka Feldhuizen opened the event with a solemn speech in German and Ukrainian. She thanked everyone present for her interest in the country she was presenting in Ukraine and the leadership of the institutions that became participants in the German Garden event.

It is important to emphasize that there are more than 1200 German companies operating in Ukraine. Since October 2016, the German-Ukrainian Chamber of Commerce has been operating. Germany and Ukraine are in close political contact. In Ukraine there are 41 schools with advanced study of German. In addition to the Embassy and Consulate General, Germany has 4 honorary consuls in Ukraine. From 2014 to 2017, for example, Germany provided joint projects with Ukraine about € 15 million for the development of civil society.

As part of the Open Doors Day, the Hanns Seidel Foundation initiated the presentation of an art exhibition.

The purpose of the Hanns Seidel Foundation is to strive to educate politically conscious citizens who are inherent in both free personal development and social responsibility and a sense of solidarity with others. This task is of the great importance nowadays as the need for self-responsibility, in a new "culture of autonomy" and "active civil society" is increasing.

OUTLOOK managed to talk with the Deputy Director of the Foundation's Representative Office in Ukraine Olena Maximova who gladly shared with our journalist the idea of creating and running a socio-cultural project: My Ukraine - Pain and Hope. 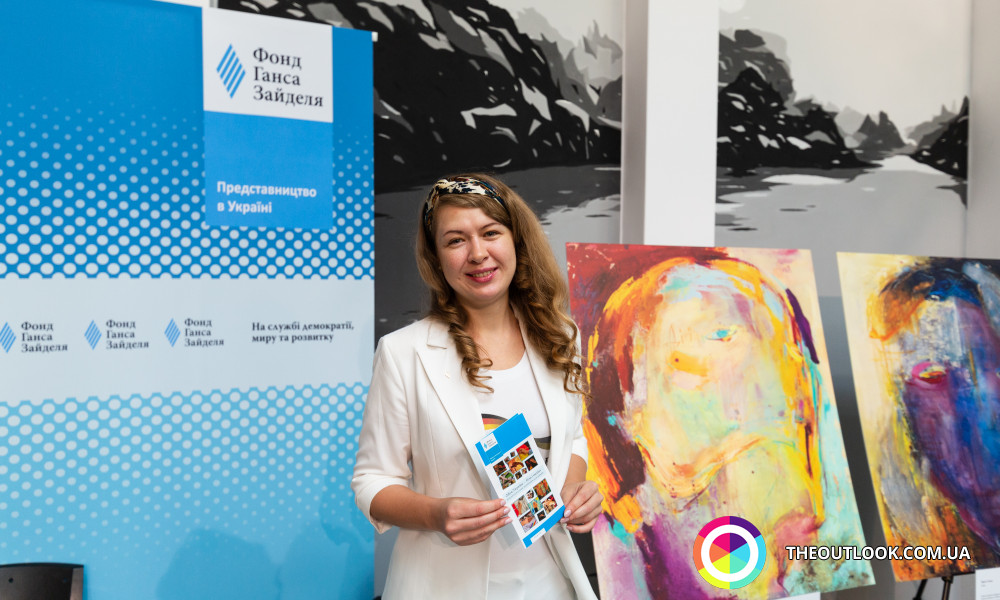 "The idea started up from our leader, Mr. Daniel Seiberling. This project is a reaction of young artists and young people who were born in independent Ukraine, whose student years fell on the events of Maidan, what is Ukraine for them, how they feel the country, its pain and hopes. We ran an open competition through Facebook and social networking sites for those who draw, and it was not obligatory for them to have professional art education. 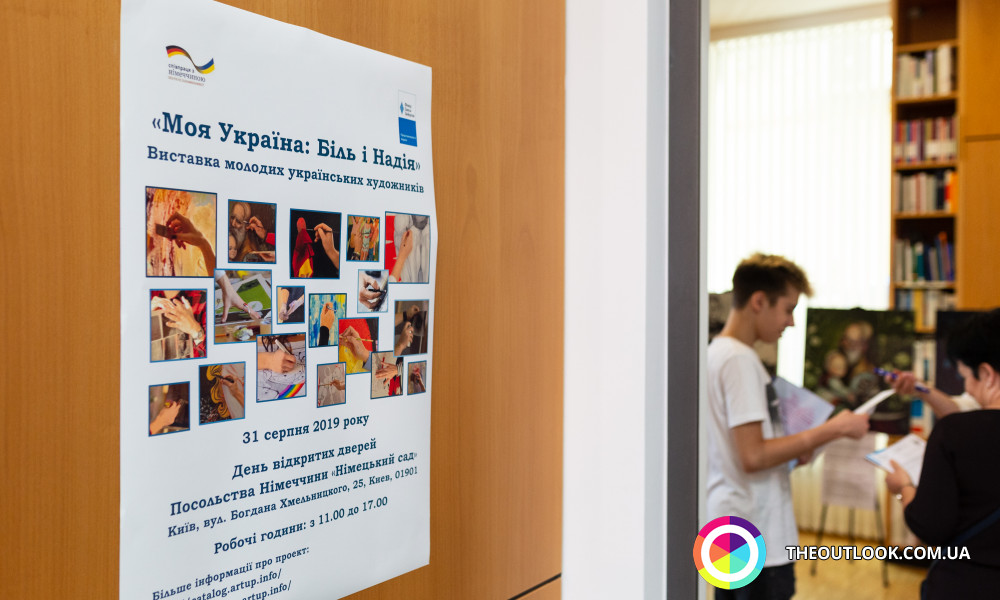 68 applications were submitted, 32 of which met the criteria. It was a motivational letter in which the artists wrote why they wanted to participate in such a project and talk about social issues through art. The Foundation selected 16 artists from different regions of Ukraine namely Lviv, Ivano-Frankivsk region, Odessa, Kharkiv, Ternopil, Cherkasy.

The artists had one week to draw two paintings in a studio, and in the evening we had lectures on how to develop young artists, about the art market in Ukraine and art in general. We were assisted by the NGO "Tolerance Ukraine" which dealt with cultural content and the selection of experts. After the work was completed, we did a photo shoot and filmed the documentary.

In December we held our first exhibition in Kyiv in the "Port creative hub". Also a week ago, we sent reproductions of works to Munich and together with the whole group of artists represented them in the headquarters of the Hanns Seidel Foundation. Then the paintings will remain at the Consulate General of Ukraine in Munich.

In April this year, the works were also presented at the Administrative Services Center. In Germany, since the sixties, there has been such a trend: "Art in public space". This is how the democratic principle of "art for all" is realized when art goes beyond galleries and museums. Exhibitions remains on a permanent basis at the Administrative Services Center" Olena Maximova said .

Take a look at the photo report from the event at the German Embassy in our gallery!